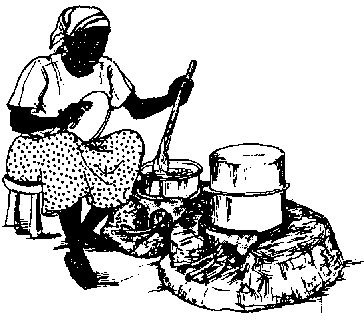 The Maendeleo is a one-pot chimneyless wood burning stove. It is made as a fired ceramic liner and is installed in a mud surround in the kitchen. Some households have two or more Maendeleo stoves. [he liner (Fig 1) has an outside diameter of 33 cm which tapers slightly to 27 cm at the base and the wall thickness is 3.5 cm - 4 cm. The height is 16 - 17 cm and when installed the worktop position for the pots is approximately 40 cm from the kitchen floor. There are 3 sturdy pot rests that support a range of flat and round bottom pots. In order to keep the Maendeleo stove simple and affordable a grate has been omitted from the firebox. The fuel entrance is in the front and formed like an arch 10 cm high and 10-12 cm across the base.

Development of the Maendeleo stove began in 1984 as part of the work of the Kenya Women's Organisation "Maendeleo ya Wanawake". "Maendeleo," a Swahili word meaning "development", has become associated with the stove. Assessment of its performance early on in the life of the project indicated savings in excess of 40% compared to the 3-stone fire and as much as 50% if efficiently operated. Although there is no chimney and emissions are vented directly info the living environment, CO and TSP measurements were respectively 2.7 and 2.6 times less than for open fires (but still considerably more than WHO recommended levels). Many users report considerable savings in cooking times also. There are in total 30,000 Maendeleo stoves in Kenya and the majority have been made by an informal ceramics factory and installed in kitchens by the Home Economic Officers of the Kenyan Ministry of Agriculture. Recent developments in West Kenya show the effectiveness of women groups as producers. They are now by far the largest group of producers, turning out about 1000 stoves per month. They sell the stoves to the Ministry of Agriculture and the HEOs organise installation and recover the costs from the users.

The liner is made from local clay and careful attention is given to the clay preparation. Sometimes two or more clays are mixed together to give a reasonable plasticity while maintaining shrinkage rates around 10% and less if workability is not destroyed. Stove-making among women's groups has been popularised through the introduction of the paddle mould.

Clay of the appropriate consistency is pressed into the mould and the paddle fumed slowly to give a consistent and perfect shape. Ash is often sprinkled in the mould before making the liner, when the mould is fumed over gently the ash and slight taper in the mould allow the liner to drop out. Depending upon weather conditions the liner is left to set (but not too hard or dry) before the fuel entrance is cut out and the rests added using step jointing techniques.

Liners are then left to dry slowly, often in the shade and protected with polythene sheet When completely dry the liners are fired in kilns or bonfires - up to 100 at a time. Best results are achieved when fired slowly but often in bonfires the firing time is as short as five hours

The liner can then be installed in a kitchen. A small platform is made, usually against the kitchen wall, from compact soil and stones. The liner is made damp to help the mud surrounding it to stick firmly when dry. Mud and stones are then built up around the liners to protect and insulate them.

Finally the whole stove is often covered with ash and cow dung to give it a smooth, neat and durable finish. Cracks in the mud occur as it drys out and are filled in as and when they appear. The stove is ready to use when it has dried completely, usually after one week.

The Maendeleo stove works best with dry wood which can be supplemented with most agricultural residues such as maize cobs. The wood sticks are split down the middle and long sticks bum as effectively as short ones. The principles of maintaining a good fire are no different from using an open fire.

The pot rests have been designed especially to give support to the pots when making Ugali (maize meal). The thick walls of the stove are useful for retaining heat for slow-cooking dishes such as maize and beans. The simple construction, its proven durability for African cooking, and the low cost and fuel saving benefits make it applicable to many other situations. 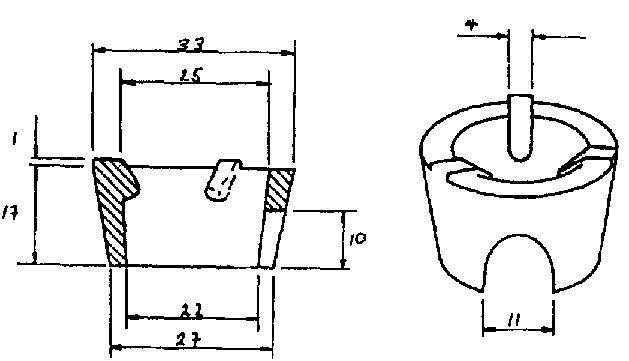 Note: Drawing in cm represents the 'green state', size. Fired sizes can be calculated by subtracting the shrinkage approx. 10%