Extract from a paper by the Natural Research Institute Kent, UK

The following environmental problems are affected by concentrations of trace gases released to the atmosphere by a number of factors including combustion and deforestation activities: Global warming Acid rain Ozone layer depletion

The exchange processes between the atmosphere, oceans and the biosphere are not well understood. Moreover the removal of pollutants from the atmosphere coupled with the uncertainty of future emissions makes the prediction of pollutant accumulation uncertain. It is widely recognised however that there is an increasing need to take steps to reduce the release of gaseous emissions to the atmosphere.

About half of the radiant energy reaching the earth from the sun can pass through the atmosphere to the surface because of its short wavelength. But the longer waves which radiate back towards space are absorbed and reradiated by water vapour, carbon dioxide, other gases and clouds. Consequently there is a net energy gain by the planet. This is a normal process which has been occurring since the earth had an atmosphere and is essential for life on the planet. This effect by which the earth is heated is known as the greenhouse effect and the gases which absorb long wave radiation are known as greenhouse gases. The problem is that in recent years the concentrations of greenhouse gases has been rising. This will lead to the changes in the earth's climate which are often referred to as global warming. 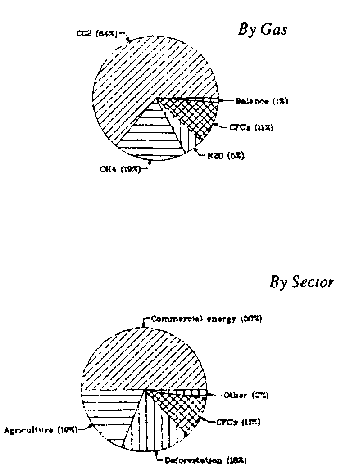 As the warming would not be uniform over the surface of the earth some regions would benefit and others suffer from global warming It is not yet possible to predict who the winners and losers would be. Models do however, agree that the polar regions would experience greater temperature rises than the tropics (White 1990). A thawing of the permafrost in the tundra regions will lead to decomposition of peat and consequently a large release of carbon dioxide and methane. A rise in sea levels has been predicted due to the expansion of sea water with temperature and a melting of the ice caps. However, there is evidence that increased precipitation in the polar regions is actually increasing the amount of water held in the ice caps. All these effects are the subject of controversy as computer simulations and long-term weather predictions are still very unreliable (Matthews, 1990).

The productivity of some plants may increase with a rise in carbon dioxide concentration. However, this would probably not be enough to offset other detrimental effects and some evidence suggests that respiration rates will increase more than photosynthesis rates (Houghton and Woodwell, 1989). The high heat capacity of the oceans will delay any temperature rise but will not be in equilibrium with the rest of the biosphere. Based on this scenario a balance will eventually be approached when the rest of the earth warms up (Schneider, 1990).

The Natural Resources Institute is the scientific arm of Britain's Overseas Development Administration. NRI's principal aim is to increase the productivity of renewable resources in developing countries through the application of science and technology. Its areas of expertise are resource assessment and farming systems, integrated pest management and food science and crop utilization.