It is no surprise that the half of the world's population which relies upon wood, crop residues and other forms of biomass burnt in open fires in poorly ventilated kitchens or rooms, is vulnerable to infections which may be fatal. As some biomass fuels disappear there is probably an increasing number of households switching to coal with possibly greater health risks. While there has been an effort to decrease fuel consumption through enhancing stoves efficiency, there still remains a virtual absence of information on how to assess stoves for clean burning and their impact on the lowering of emissions in the kitchen environment. This paper explains how to calculate emission rates and air exchange rates in rooms using a simple procedure that can be carried out in a village household with equipment that should be available within most universities in the Third World. 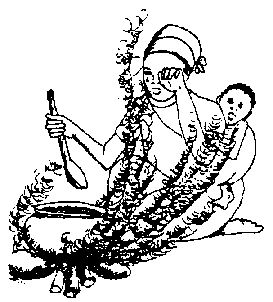 The model proposed to determine emission rates was developed by Traynor. It uses a mass balance treatment of the basic physical/chemical processes that describes the behaviour of pollutants in an enclosed chamber.

Increases in indoor air pollution levels occur as a result of the flow of outdoor pollution into the interior environment less the fraction that is removed from or absorbed by the building plus the rate at which pollutants are generated indoors.

Decreases in indoor pollution levels occur as a result of the flow of indoor air out of the building plus the rate at which indoor pollutants are removed via various chemical and physical removal processes that occur within the interior environment (ea. wall absorption).

It is no' the intention of this article to explain how Apte and Traynor arrive at the model: readers wanting a full description should follow up the reference or write to Boiling Point.

For the concentration of a pollutant at time (t)

P = fraction of outdoor pollutants that penetrate the building

a = the air exchange rate in numbers of changes per hour

Co = the outside concentration of pollutant in ppm or ug

k = net rate of removal of the pollutant by processes other than ventilation (eg - chemical reactions, absorption or settling sedimentation in exchanges per hour).

For this equation to be accurate, there are a number of conditions that must be obeyed:

1. The outside concentration Co of the pollutant is assumed to be constant during the time of observation. Thus no other fire should be lit or extinguished in the neighbourhood and the wind should blow uniformly!

2. The air exchange rate (a) should be constant, this means that windows and doors should be left closed or open

3. The pollutant must be uniformly mixed in the room. All experiments should be done with a fan running at a suitable speed without unduly disturbing the fire place or performance of the stove.

4. The emission source strength (S) should be constant for wood burning stoves, this means a uniform burning rate. 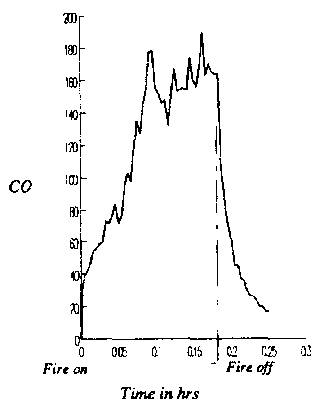 The measurements should be taken in a room with a lit stove and by plotting the increase in C(t) with time until C(t) has stabilised. Then by extinguishing the stove and then plotting C(t) in decay a graph can be generated as in Fig 1. The theory for C(t) can now be used to calculate the source strengths and emission rates from the appliance as well as the room air exchange rate.

This is what you need

1. An instrument to give you instant readings of the concentration of a pollutant that you find important ea. the RSP (Respirable Suspended Particulates) monitor or a Drager CO monitor (electronic type) or monitors for other combustion gases ea. CO2, NO2 or Hydrocarbons. For cookstoves CO seems the most appropriate, since this gas is emitted during both traditional and modern fuel combustion, and is highly toxic.

2. A fan to make sure the smoke from the fire is evenly distributed throughout the room.

3. A watch or clock that gives you the time by the second.

4. A kitchen or other room in which you wish to conduct the measurements. For very large rooms you may need more than one fan for mixing.

5. Reasonably constant weather for the duration of the test (temperature, humidity, wind).

This is how you do it

1. Put the monitoring instrument as close to the centre of the room as possible, far from wall, floor and ceiling and in a position where it can be read easily. Turn the fan on to spread any smoke evenly throughout the room without disturbing the fire.

3. Light the fire and try to maintain a steady burn rate. From this moment you should record concentrations as frequently as possible.

4. Maintain the fire until the concentration selected ea. CO begins to stabilise, then put out the fire immediately and stop it from smoking or remove it from the room.

5. Continue to record the concentrations as they decrease, until they stabilise at a very low level (near zero).

6. You may now like to repeat the test and/or change the conditions.

7. Plot the results on graph paper and/or obtain a calculator with linear regression functions.

How to calculate the results

Air exchange rate (a) can be calculated from the C(t) results for the decay period (Fig 2).

From equation 1 and where 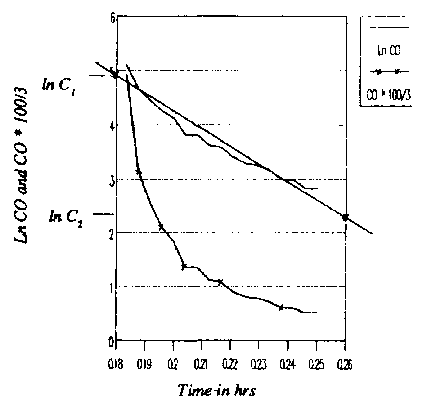 The linear regression of In (C-Co) can be used to compute the slope of the decay line and where r² shows how well the decay fits a straight line. For those of you without statistical packages on calculators, In normal paper can be used instead.

Plot a graph with the time along the 'x' axis and the natural log of the pollutant concentration along the 'y' axis. Draw a straight line through the points as best as you can for the period between the time you removed the pollutant source and the end of the decay period (end of test).

Then calculate the slope of the line using

Using the air exchange rate, the source strength can be calculated using the equation:

What can this model tell us?

In most households in the developing world the build up of indoor pollutants can be attributed to the burning of biomass or some fossil fuels such as coal, in unvented appliances in poorly ventilated households. This model can help quantify some of the problems by specifying more precisely whether rooms should be better ventilated or whether it is the stove that is at fault. It can also help evaluate the differences between stoves with regards to their emission rates.

In some instances where households are close to roadsides with abnormally high traffic movements, these tests may be used to recommend lower ventilation because pollutants may be coming from outside rather than from the cooking appliance.

In tests carried out at the East-West Centre in May and June 1990, the model for predicting pollutant concentrations was used to measure the changes in air exchange rates in a simulated village kitchen resulting from changes of the position of doors and windows (see Fig 3).

The results clearly show that the wide open door and windows give better ventilation (33 air exchanges per hour compared to 18 air exchanges per hour with only one door open). Although these results are perhaps obvious, this experimental mode can be used to measure effects of other ventilation systems put into kitchens such as inglenook chimneys (chimneys with cowls built into the walls) or extractor fans etc.

Although this model has only been used for laboratory type experiments, we would be happy for you to try out these experiments and publish your findings in Boiling Point. ITDG is planning tests in Sri Lanka. 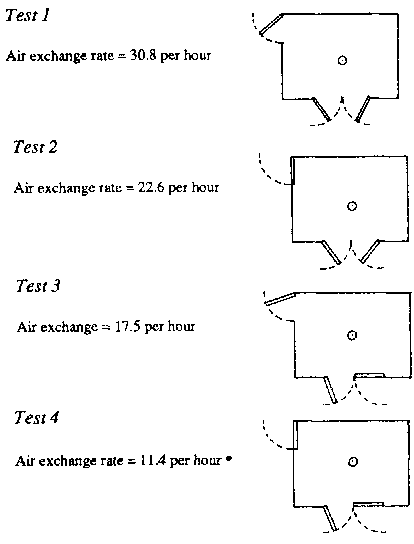