The Nepal-Australia Community Forestry Project contains an improved stove component which has devised a simple and sustainable process for promoting the use of improved stoves by village people in Nepal. These new stoves contribute substantially to the villagers' welfare by removing the smoke from the kitchen. They meet the needs of the villagers by being cheap and easily constructed, and can be repaired by the villagers themselves. With time and further training for the builders, the stoves should be able to contribute to the conservation of forest resources. This chulo, complete with its brick chimney, is a people's stove rather than a project's stove.

The majority of Nepal's population depend on forest products and agricultural residues for the preparation of human and animal food, as well as for heating their homes during the cold months. In many parts of Nepal, the density of the remaining scattered forests is steadily declining as a result of the heavy utilization pressure, although in some areas both the density of existing forests and the number of trees on private land is increasing.

Traditionally most Nepali houses contain one or more simple chulos. These can be just three stones, a metal tripod or a simple mud and stone stove. There is no tradition of constructing chimneys and hence at cooking time Nepali houses are filled with smoke.

Initially the project distributed ready made improved (fuel efficient) ceramic stoves within selected villages of the project area. These stoves were purchased by the project and transported more than 50 km to the villages where they were distributed freely and installed in interested villagers' houses. This programme was carried out for 5 years during which about 2,000 stoves were distributed. Monitoring of this programme indicated that besides being costly and unsustainable, the stoves were easily broken and quickly fell into disuse. The people found them difficult to clean and maintain, expensive to replace broken parts and often they were viewed as the project's stoves rather than the people's stoves. Clearly, although they may have been fuel efficient for short periods, they did not meet the people's needs and were therefore not sustainable.

In 1989 the project reviewed its stove programme an decided to promote improved stoves by implementing training programmes in which villagers would be taught to build improved stoves using locally available materials.

Using this philosophy there were no problems in constructing the firebox, pot seats and baffle out of local materials. However, the construction of a chimney was not so easy.

First, ready made ceramic flue pipe was used, but this was found to be expensive and there was a high breakage rate during transportation. Second, chimneys were constructed from stone and mud mortar, but considerable time and craftsmanship was required. Third, flue pipes made from old tin containers were relatively expensive and only lasted for about a year. Next an attempt was made to build clay flue pipes from local materials, but the quality of the available clay did not produce satisfactory results. 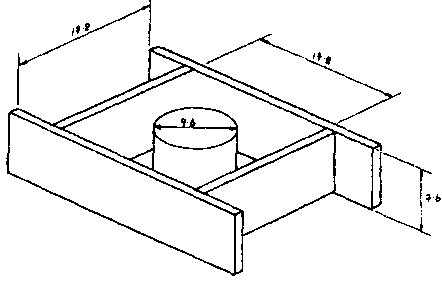 Finally a simple solution to this troublesome problem was discovered. A wooden mould was constructed to enable the production of flue bricks using locally available materials such as mud, sand and ash. Using this type of mould, flue bricks can be easily made by villagers and then dried in the sun for 4 or 5 days. The dried bricks then can be stacked up and joined with a mud mortar to produce a chimney of the desired height. Angles or elbows, to allow the chimney to pass outside the house, can be made easily by breaking a hole in one side of the flue brick. A stone is lightly mortared with mud into the hole in the top flue brick inside the house to allow for frequent cleaning of the chimney. 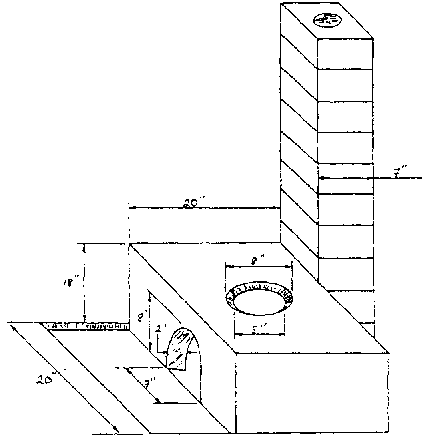 Local carpenters can easily copy the wooden flue brick mould and so stoves can be produced for little or no cost by the villagers once they have been trained and most importantly they have the necessary skills and the available materials to repair or rebuild stoves as the need arises.

Monitoring of these locally constructed chulos has shown that almost all of them were being used regularly even if some of them had not been properly constructed as fuel efficient stoves. Some of the stoves were found to be still in use after two years and in some villages the improved chulos were being adopted by villagers who had not received the initial training. In most of the houses where improved chulos have been constructed, the traditional chulos have been removed. In some houses the women have experimented with the design of their chulos to produce variations of the one pot hole, two pot holes and a large-sized pot hole designs to suit their own needs. Interestingly the women, who are the users of these new chulos, do not claim fuel efficiency as being the most important factor in accepting these chulos. For them the removal of smoke from the kitchen the reduced cooking times with the two pot hole chulo are the most important factors.

Like most successful technologies, it is relatively simple, can be developed from existing skills and does not cause family or social problems. It should be easy to 'transfer' and to adopt for similar conditions without expensive research or advisors.

Ed Note: This is an interesting article and we commend the Nepal-Australia, CFP, efforts to develop a stove that Nepali people like. From our experiences simple stoves that cook quickly and remove smoke through chimneys, tend to have high fuel consumption. We would like to know what steps have been taken to ensure such stoves do not increase consumption. If they do then, how does the Nepali-Australia project justify increasing fuel consumption and associated burdens for benefits in greater convenience and health.