Extension work is carried out through two-way communication. This communication takes place in a cross-cultural environment that is not familiar to a new agent. Sensitivity to that environment is important in everything the agent does.

Evidence of cultural differences is readily found in a people's customs and beliefs. Extension agents need to look beyond these more obvious manifestations of culture to subtle distinctions fauna in language and other means of communication if the desired two-way flow of information is to take place.

Learning to speak the farmer's own language is a goal most extensionists work towards in some way or another. Learning to use a language in a culturally appropriate way may in many respects be a more useful objective. For example, there are expressions in most languages that have special (colloquial) meanings in local circumstances. "An empty sack will not stand up" does not refer to grain bags in a storeroom; it is an expression that says, in effect, "A man who has not been fed will not work." Proverbs or parables such as this one are very direct forms of communication that can enhance an extension worker's ability to talk effectively with people. Generally, they refer in some way to the most vital aspects of life in a given culture. Systematic questioning about key elements of life, such as food or family, may generate a list of expressions that would prove useful in an extensionist's work with farmers.

An equally important consideration is the way people of a given culture communicate non-verbally. There are often very strict, unwritten rules regarding the gestures one uses, eye contact, and other means of physical communication. An outsider may unwittingly break these rules and cause offense.

A useful way to avoid cultural miscommunication when using a language is to choose a language instructor or interpreter who also serves as a cultural informant. Focussing on parables and non-verbal means of communication in addition to learning grammar and vocabulary will help ensure that culture does more to enhance communication than impede it.

The participants in any communication exchange bring with them a particular viewpoint or bias that reflects their culture. Peace Corps volunteers doing extension work in technical fields such as agriculture often betray a special bias toward abstract scientific concepts that is not always shared by the people with whom extensionists work.

Experiments have been conducted which show that people in non-literate societies do not share American ("Western") concepts of measurement or geometry.

For example, equal quantities of water were poured into a long, thin glass and a short, stout glass. When asked which glass contained more water, 60% of a non-literate group chose one glass or the other because of its shape. Similarly, two points were marked on a circular table and test participants were asked to connect the points with a straight line ("as if you were carrying a heavy load of wood or water"). Again, roughly 60% of the participants failed to draw the straight line. The implications of a volunteer's scientific bias may not be apparent until farmers confront a task such as measuring fertilizer or digging an irrigation ditch and encounter difficulty. The need for extension agents to consider this type of cultural difference is nonetheless apparent.

Illiteracy has other implications. People who are constantly exposed to the printed page are also frequently inundated with photographic images, not only in magazines and books, but also on television and movie screens, signs and advertisements. The skill of interpreting these images is referred to as visual literacy. Those who are visually illiterate have difficulty with depth perception in pictures, and they have a hard time discovering motion or identity. Other two-dimensional visual effects such as maps or drawings present similar difficulties to those who are not "conversant" in visual language. Thus, an extension worker should use care in choosing visual aids for a training presentation.

Sometimes maps can be constructed as three-dimensional scale models. Again, caution is warranted, in that interpreting scales may not be a common practice in a given culture. The example is often cited of the extension worker who employed a meter long scale model of a tsetse fly in a presentation to farmers on cattle diseases. At the end of the short talk, one farmer raised his hand and thanked the agent for alerting him to the dangers of the tsetse fly. He added that he was, himself, not too worried because he had yet to see a fly anywhere near as big as the one in the agent's hand on his own farm.

Another problem with scale models in particular and visual aids in general, is the unconscious use of negative symbolism. Colors, certain animals or replicas of human beings can all, in certain cultures, have connotations of danger or represent unfavorable omens. The key to avoiding offense in cross-cultural communication is pre-testing presentations with part of the intended audience to determine their suitability in advance. Observers can help an extension agent with suggestions that will make his communication more direct and bias-free.

Just as ignorance of cultural norms can work to block effective communication, understanding the communication patterns in a local culture can open up new, exciting avenues for information flow. Storytelling is a means of communication that has been practiced in many cultures for generations. When used in extension work, stories can serve several different purposes. They can demonstrate drawbacks of specific agricultural practices without singling out any one farmer in front of her peers. This is accomplished by telling the story in the third person about a fictional character and allowing the audience to draw its own conclusions.

Another particularly effective technique is to make analogies to situations within the collective experience of one's audience.

This allows farmers to build upon what they already know as they learn. A rice plant goes through a growth stage at which the stem grows fat just prior to vigorous vertical growth. This is an opportune time to apply nitrogen fertilizer so it is important that the stage be precisely identified. By analogy, extension agents and farmers in West Africa refer to the stage by saying that the plant "gets belly", or becomes pregnant. This type of analogy can be used in the context of a story to help farmers come to a fuller understanding of a new practice or method by incorporating concepts with which farmers are already familiar.

The way a story is actually told can vary with the story's purpose. An extension agent can incorporate peer teaching into storytelling by asking several farmers to tell different parts of a story. This allows for wider participation and generally creates a higher interest level on the part of the audience. An extension agent can also tell half of a story and leave 'blanks' for farmers to complete. This can be used to test and see how much farmers actually retain during training sessions, e.g.:

"Jose has been working all day under the hot sun. He is tired and is looking forward to the meal and bathwater that will be waiting for him when he returns home. Still, he wants to finish planting his maize field before evening, so he continues, methodically dropping handfuls of seed into holes (how far?) apart..."

In some cultures, stories can even be dramatized with farmers playing different roles. In general, creative use of this medium can bridge communication barriers that would otherwise pose serious problems to outsiders acting as extension workers.

Songs and dances are communication media that are easily overlooked, but nonetheless serve as extremely effective mass promotional devices. Most villages have someone who can sing and put words to music. The agent need only ask this person to prepare a song on a special topic, such as:

The man who harvested his grain too late

The village that had no grazing restrictions

When set to a popular tune with a pronounced dance rhythm, the elements of these stories can rapidly become ingrained in the daily routine of a whole village.

Role plays or spontaneous dramatizations provide an opportunity for farmers to practice skills in problem-solving, community organizing, and teaching methods. They require few props and minimal preparation, can be very lively, and can come very close to approximating real life situations. It is important not to ask farmers to role-play situations that are extremely controversial. To prevent bad feelings from developing, each player should be allowed to de-role by saying how it felt to play his or her character, and discussion among players and observers should be encouraged.

Finally, a wide variety of visual aids can be employed to improve cross-cultural communication. Several cautions have already been mentioned about the limits to the use of graphics models and photographs. Even so, excellent training materials are available (see TOOLS section below) to help extensionists prepare and use visual aids in their work.

Choice of audience may have clear implications within a particular culture. In some cases, it is a sign of respect to pay separate visits to individual households. Practically speaking, training sessions with individuals may be more effective because they can be paced to meet specific needs. They also make use of a farmer's own fields as a training setting, a more comfortable and relevant arrangement for most farmers.

The advantages of working with groups include opportunities for farmers to step into active training roles with their peers. This helps de-emphasize the extension agent's role as 'expert' and helps ensure that information will pass through culturally appropriate channels.

The techniques suggested for improving cross-cultural communication in this section can be combined in many useful ways. Additional references to consult are included in the TOOLS section below.

Use of a scale model:

To demonstrate the interrelationship of a system's parts and to solve a problem, a set of irrigated rice paddies are modeled out of clay; Farmers owning connecting paddies are assembled and each is asked to demonstrate with the model how he irrigates his own plots; where he lets water into his plots, where he lets it out, how long and often he lets water flow through his plots, etc. A discussion then ensues about how water not used by farmers upstream must be allowed to pass unimpeded to farmers downstream. 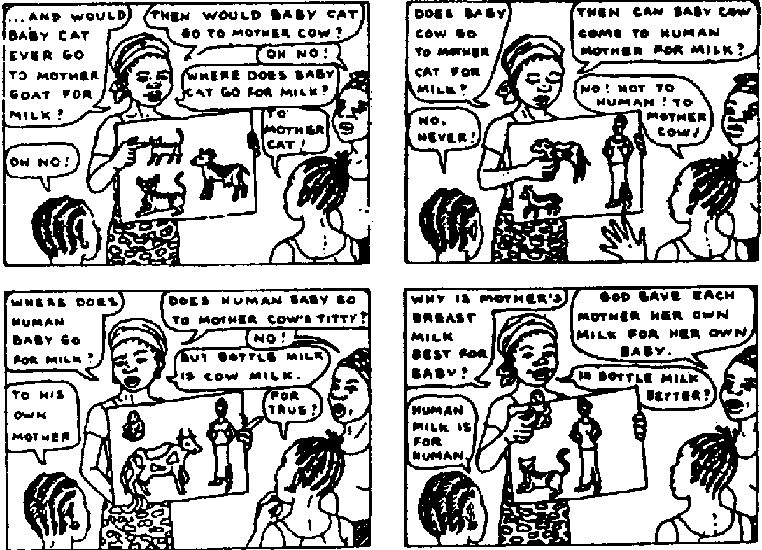 Use of role playing:

When preparing a joint demonstration on fertilizer application a Peace Corps extension worker and her counterpart take turns playing the role of a non-literate woman vegetable farmer. They pose questions to each other and follow advice exactly as it is given to see if they can uncover any areas of cultural bias in their presentation.

Sources of proverbs and parables

When learning a new language and gathering useful colloquial phrases for use in cross-cultural communication, start with vital topics such as those on the following list:

• interpersonal space (how close to stand to someone)

• timing of verbal exchange (is it rude to interrupt someone before they have finished speaking?)

• ability to read maps and photographs

• visual aids such as

- Does the training method relate to a farmer's own experience?

- Is the information timely?

- Is the skill needed?

- Is the innovation affordable?

- Is the language used free of unnecessary technical terms and abstractions?

- Is the tone of the presentation respectful and pleasant?

- Is the presentation well rehearsed and organized?

- Is a mechanism in place to make sure the desired message was conveyed in the presentation?

• demonstrating the relationship between a system's parts

• Farmers, counterparts or children (excellent for use in schools)

• capable of being manipulated (encourages participation)

Making and using other visual aids

There are excellent materials available on making and using visual aids. Refer especially to: