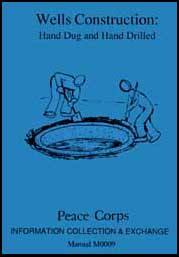 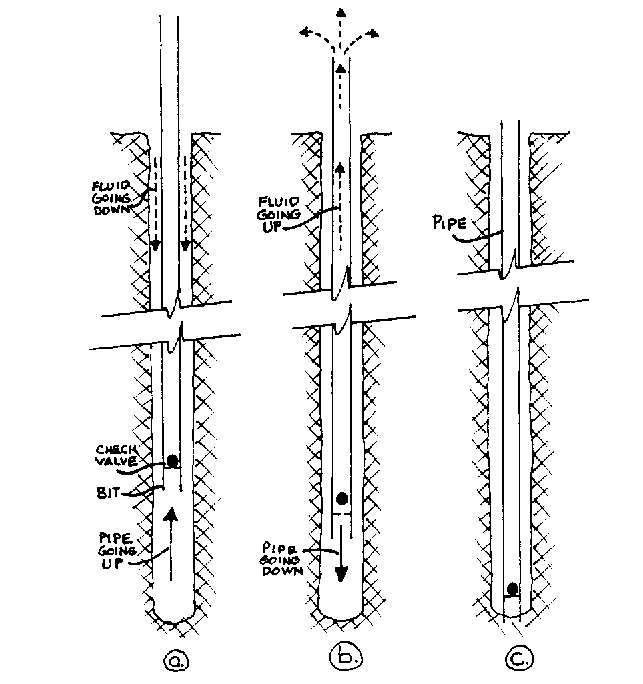 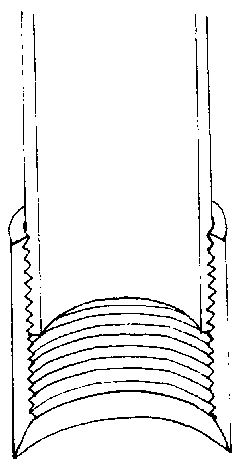 • the work is completed quickly;

• the subsurface conditions are easily determined from 1) cutting samples taken from the drilling fluid issuing from the top of the drill pipe and 2) the rate of descent of the tools.

• the method requires that water be available;

• Cutting bit: A regular pipe coupling can work as a cutting bit if the edges are sharpened. File or grind only the inside edge of the coupling to avoid narrowing the diameter. (See Figure 13-2.)

• Check valve: A valve prevents the downward flow of liquid in the drill pipe. Ball valves are commonly used. Where materials are scarce a well worker could use his/her hand to cover the top of the pipe when it is lifted, lifting the hand as the pipe is dropped. (See Fig. 11-6.)

• Drill pipe: Metal pipe which can be coupled together in suitable lengths as needed to provide necessary drill string height is usually used.

• Swivel hose connection to top of drill pipe: A water discharge piece is not absolutely necessary, although it is useful in helping to channel the water to a specific location rather than having it come directly out of the top of the drill pipe. (See Fig.13-3.) Depending on the lifting apparatus used, a flexible hose could even be connected directly to the top of the drill pipe although it may become damaged with the continual up and down motion adding stress to it.

• Lifting mechanism: This can be made of local materials and be whatever you think appropriate. Some options are:

• Arrange and set up all tools, equipment and supplies. Leave the area immediately around the well clear of materials that do not have to be there. Set up the lifting device and locate it appropriately. A tripod should have the pulley centered over the hole. A lever type arrangement should have the end of the lever adjacent to the hole.

• Start the hole in non-caving formations by sinking a hole as far as possible with a post hole digger or spade. In caving formations drive a section of pipe down so that the top end is slightly below ground level.

• Assemble the tool string,which consists of a bit, check valve, drill pipe and discharge piece. Set the tool string upright in the hole, and attach it to the lifting device.

• Begin the drilling operation by raising and dropping the tool string. The harder the material being drilled, the more rapid and shorter the strokes should be for the best results. Up to 120 strokes per minute may be desirable for shales, sandstone and limestone. The softer the material being drilled, the slower the stroke should be, from 30 to 60 strokes per minute in clays, loose sand, and gravel. In extremely soft material take care not to let the bit sink too far into the formation, thus plugging the bit or valve and making removal difficult. The best and safest method is to allow the bit to cut and mix the cuttings so that no chunks large enough to clog it are passed up the pipe. When threaded pipe is used in the tool string, it should be continually rotated in a clockwise direction to help ensure that the connections stay tight and a straight round hole is being drilled.

• Add more drill pipe when necessary as the hole is deepened. As the string becomes heavier it will require more and more power to lift it.

• It is also necessary to add water as the hole is being sunk to keep the hole full. The settling pit may need to be cleaned out to prevent excavated material from flowing back into the hole with the drilling fluid.

• When a good water-bearing layer is reached there is usually a noticable drop in drilling fluid level. Continued pumping action will produce water and if sufficient quantity of water is produced drilling can be stopped. Drilling fluid will also noticably drop when some dry sand, or gravel formations are reached. In this case it will be necessary to increase the weight (thickness) of the drilling fluid with additional clay, to help seal the hole and prevent fluid loss. (In this situation the casing could also be driven in to reinforce the walls.) Rice hulls, wheat chaff, cow dung or other material can also be added to the fluid but the more and coarser the sealing material used the more difficult it will be to develop and clear up the well later. Excessive use of hulls or straw-loaded material may later plug the well screen and render the well useless.

• The hole is drilled and cased to the maximum depth possible, to the bottom of the aquifer, or until the water-bearing layer has been penetrated far enough to produce the desired amount of water.

• Sink and develop the bottom section of the well. Most often the casing and well point are driven into aquifer.