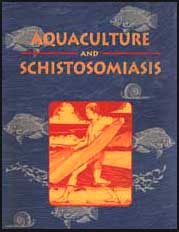 Increased production costs, environmental impact problems, and utilization of poor quality soils were the main reasons for the development of integrated aquaculture in Hungary. Fish-cum-duck culture, aquacultural rotation, and the use of different sources of manure in aquaculture systems are the typical forms applied.

In monoculture, 300-500 ducks/ha can increase common carp production by 140-175 kg/ha. In polyculture utilizing silver and bighead carps, a fish yield of 2 t/ha can be achieved without supplemental feeding, and 1,000-1,200 kg of ducks (2.0 to 2.4 kg each) can be produced simultaneously.

A three-phase aquacultural rotation has been developed for areas with poor quality sodic soils. The first phase, lasting 2-3 years, is the double meat production. It is a kind of fish-cum-duck culture with a polyculture of fishes, and results in an approximately 300% increase in total meat production (duck and fish). The second phase is the "forage-crop production on pond-bottoms," lasting 4-5 years. A mixture of alfalfa and red clover proved to be the most economical when raised on the dried bottoms of the same ponds. In the third phase, rice is produced on pond bottoms, resulting in 50-100% higher yields than the average for the country. After three years of rice culture the rotation system starts again.

The use of manure in fish ponds has the "lowest level" of integration with fish culture. Solid and liquid pig manure, fermented chicken manure, as well as domestic sewage water have been tested and are partly applied in Hungary.

The aim of this review is to characterize Hungarian integrated aquaculture practices and briefly to compare them With the Asian practices.

In general, integrated aquaculture systems have several advantages and disadvantages, as listed in Table 1.

The different systems show great variety in size and complexity. Several attempts have been made to classify the integrated aquaculture systems. Muir (1986) grouped them into three main types, depending on where the aquaculture is integrated (Table 2).

Varadi (1990) differentiated integrated aquaculture based on the size and complexity of integrated animal husbandry:

1. The small-scale, Asian type of integrated fish farming means the aquaculture activity is directly linked to one or more activities (Figure 1). The possible advantages of integrated aquaculture as cited above (Muir 1986), can really be recognized in these systems. Small-scale integration, however, does not necessarily mean complex integration. In many of the small farms, livestock are raised separately from the fish ponds and the manure is transported to the ponds. 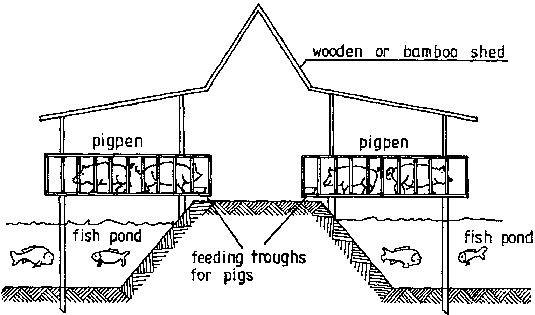 2. In large-scale integrated fish farming, integration usually means only the use of manure (liquid manure) in aquaculture systems. The simple integration scheme of a fish and an animal production farm is shown in Figure 2. 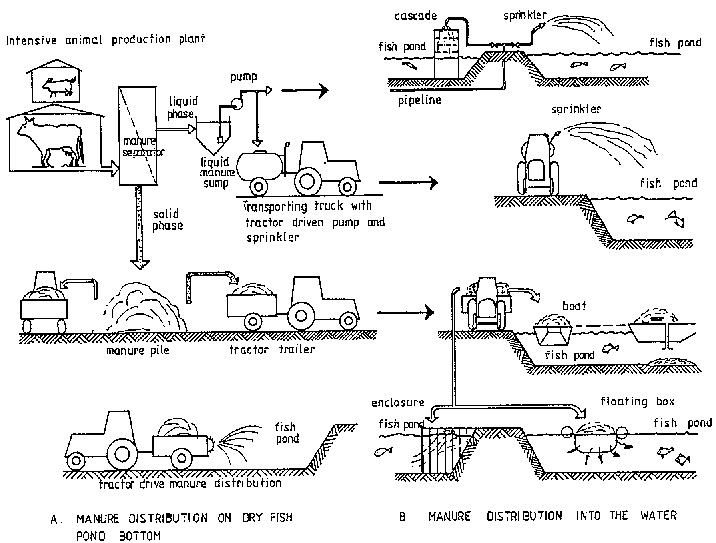 FIGURE 2. The scheme of the simple integration of a fish and livestock production farm (Varadi 1990)

Aquaculture in natural waters is one of the oldest activities in Hungary. Pond fish farming became more common with the regulation of rivers in the nineteenth century. About 140,000 ha of water currently are under fishery production; 23,000 ha of that are pond surfaces. Aquaculture in

The more valuable fishes cultured in Hungary are the European catfish or sheatfish (Silurus glands L.), the pike-perch (Stizosteidon lucioperca L.), pike (Esox lucius L.), rainbow trout (Oncorhynchus mykiss Walb.), and the eel (Anquilla anguilla L.). For pike, pike-perch, and sheatfish, special Hungarian methods of propagation and culture have been developed. The Siberian sturgeon (Acipenser baeri Brandt) and hybrids of crosses of the Siberian sturgeon with the sterlet (Acipenser ruthenus L.) are the newest and most promising fish for intensive systems. Development of culture technologies for endemic crayfishes (Astacus astacus L. and Astacus leptodactylus L.) also is a new direction in aquaculture. Meanwhile, the largest challenge met by Hungarian aquaculture is privatization. The domination of state ownership is changing. In 1989, 70% of pond surface belonged to state farms, 28% belonged to agricultural and fishery cooperatives, and less than 1% was private. Among the "users of natural waters" the ratio of the private sector is even lower. However, in spite of a general recession in Hungarian aquaculture in the last 2-3 years, in 1990, the private sector increased its production five times.

Increased production costs (primarily water and energy), environmental impact problems, and utilization of poor quality soils were the main reasons for the development of integrated aquaculture in Hungary. Fish-cum-duck culture, aquacultural rotation, and the use of manure from different sources in aquaculture systems are the typical programs.

Thus, Hungarian fish culture was integrated mainly with agricultural activities, namely vegetable culture (fish-duck-rice-alfalfa-red clover), and animal husbandry (fish-cum-duck) to include the use of manure (pig, chicken, sheep). In addition, experiments with industrial integration were initiated to utilize the heated effluents of power stations for fish culture, as well as the utilization of by-products of slaughterhouses and pharmaceutical factories for feeding fish. As an example of the integration of aquaculture with sanitation, the utilization of domestic sewage waters in fish culture was also attempted.

Raising ducks on fish ponds in Europe was developed as a large-scale integration system after the Second World War when there was a serious protein shortage, and the lack of mineral fertilizers became a bottleneck to further development of pond fish culture (Woynarovich 1980b). Hungary initiated such large-scale experiments as early as 1952. The main advantages of fish-cum-duck culture compared to integration with other animals (Barash et al. 1982) include the following:

- Costs of collecting, storing, and transporting the manure are eliminated.

- A solution is provided to problems of environmental pollution by animal wastes.

- The environment for manure-producing livestock is improved.

- Ducks eat natural feeds that develop in the pond. 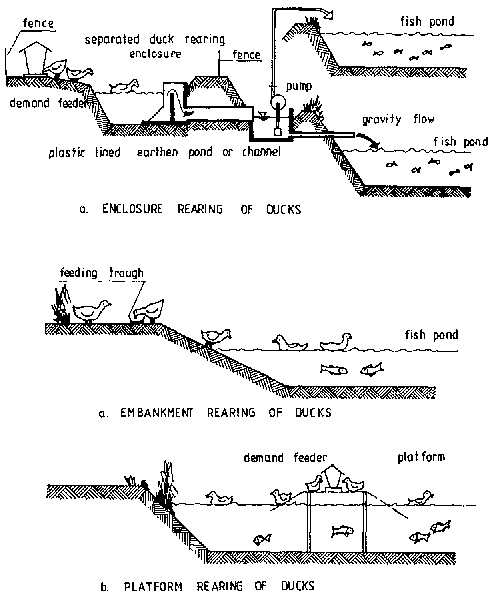 • Enclosure rearing, or their combination. The schemes of these systems are shown in Figure 3 (after Varadi 1990).

In Hungary, 300-500 ducks can be raised on 1 ha of water during one summer. The vegetation season (when the water temperature is higher than 15° C) is about 150 days. According to the estimation of Woynarovich (1980b) 100 kg of duck manure distributed continuously in pond water increased common carp production in monoculture by 4-S kg/ha. That means 500 ducks can increase common carp production by 140-175 kg/ha. If polyculture of fishes is applied, 1,000-1,200 kg of ducks are produced, in addition to the yields of marketable fish (common carp -- 1,000-1,200 kg/ha; silver carp -- 500-600 kg/ha; bighead -- 150-200 kg/ha). With a decrease in ratio of common carp and an increase in ratio of herbivorous fishes (silver carp and bighead) fish yields of 2 t/ha can be achieved without supplemental feeding (Woynarovich 1980b).

Trials to introduce fish-cum-goose aquaculture into Hungary were limited.

Aquacultural rotation was developed for unproductive sodic soils in Hungary by Muller (1978). Aquacultural rotation is a kind of sequential integration and may be adapted for any flat area where the soil is suitable for fish and rice culture. The optimal size of ponds is 30-50 hectares. Inner sides of the dams are to be constructed with a moderate slope (1 :5, 1 :4), thus assuring their protection. The filling and drainage system of each pond must be independent, using irrigation water and a drainage system by gravity. The pond bottom should be large enough for rice fields of 2-3 hectares. Within the rice fields the bottom-level differences should not exceed + 5 cm.

1. Double meat production. This is similar to fish-cum-duck culture. On a fish pond of 30-50 ha, 10,000-12,000 ducks may be raised at the same time, and this can be repeated 3-4 times a year. Average weight of marketable ducks 48-50 days old is between 2,600 and 3,000 g. Natural fish yields doubled where duck rearing had been practiced for 2-3 years Table 4, after Muller 1978). Total meat production (duck and fish) of a pond with fish-cum-duck culture was 3.2 times higher than a traditional pond using a polyculture of carp and silver carp.

2. Forage-crop production on pond-bottoms. Organic matter and mud deposited during the first phase of the aquacultural rotation for 4-5 years offers an opportunity for agricultural crop production on the dry pond bottom. Muller (1978) found that leguminous plants and a mixture of alfalfa and red clover gave yields up to 85.05 t/ha of green weight. With irrigation, polyploid red clovers provided the highest yields. The soil is enriched in nitrogen and calcium by the alfalfa.

3. Rice production on pond bottoms. Pond bottoms are considerably improved during the first two phases of aquacultural rotation, significantly increasing organic matter and nitrogen level. This nutrient enrichment can be favorably utilized for rice production. The third phase lasts for three years. Highest yields of rice were obtained following production of alfalfa, with mixtures of red clover. Yields were 0.7-1.0 tons higher using this combination, than those following sunflower, sorghum, and maize production. Muller (1978) achieved 50-100% higher yields using this technique than the average yields of rice in Hungary, with a maximum at the level of 5 t/ha. After three years of rice production, the dams of the rice fields are levered and fish-cum-duck production starts again.

Use Of Manure In Fish Ponds

In this case integration strictly means the application to fish ponds of manure produced elsewhere. Animals like chickens, pigs, and cows are raised in special cultural units that are not integrated into the fish farm. Since Hungary is a large pig producer, the application of pig wastes in fish ponds could be the best example of this type of integration. The utilization of pig manure in fish ponds started in the 1950s, when only common carp were stocked. At that time, a disagreeable side effect of heavy manuring often occurred, in the form of algae blooms. Since the 1970s, Chinese carp have been stocked in polyculture with the common carp (Table 5), and this problem was eliminated.

In early studies, a critical question was how much pig waste could be utilized per unit of fish pond without running the risk of a fish kill from oxygen depletion. Experience has shown that usable quantities of pig wastes in fish ponds depend on the delivery and distribution methods: 1,500-2,000 kg/ha/yr can be used when pig manure is placed in the pond in localized heaps. When a carbon manuring method is applied, however, it is possible to distribute 300-600 kg/ha of manure, 1,000-1,500 kg/ha of the thick liquid phase of the manure, or 1.2-2.5 m²/ha of commercial pig waste, over the pond surface, on a daily basis. The maximum possible waste loading in fish pond was determined to be two to three times higher than the above quantities. The total manure loading per hectare of pond surface was calculated between 40 and 80 pigs/ha (Woynarovich 1980a).

Later studies (Kintzly and Olah 1981, Kintzly et al. 1983) addressed the optimal level of the used liquid pig manure as well as the optimal polyculture structure. Biculture of silver carp with common carp (2,500 p/ha + 1,000 p/ha) gave higher yields than both the monoculture and polyculture, with a maximum yield of 2.06 t/ha/year. In monoculture the fish did not reach the 1 kg body weight that is the marketable size in Hungary. Good results were obtained when tench (Tinca tinca L.) were introduced into the polyculture.

Advantages of the methods used in Hungary are:

- Pig waste can be placed into the fish ponds during the vegetation period, while on the fields the application is possible only during late autumn.

- Fish had low levels of fat.

- The discharged water from these fish ponds met the requirements of environmental protection standards.

Disadvantages of the methods used in Hungary are:

- The bottom of the ponds accumulate organic materials.

- Transport costs of liquid manure became the limiting factor for the application of this method.

- When using the drainage system, only the gravitation method was economically reasonable under Hungarian conditions (Kintzly 1991, personal communication).

Some Basic Differences Between Asian And Hungarian Integrated Aquaculture

Reasons for integration. Economic as well as environmental aspects dominate in Hungary. In Asia, a dominant reason is the increased production of animal protein for the improvement of the economic condition of farmers.

Forms of integration. In Asia, integration has a higher level of complexity, and is scattered among small-scale agricultural activities.

Future of integration. There is less prospect for integration in the near future in Hungary than in

Asia, due to current economic changes. After the ongoing changes in ownership in Hungary,

The author thanks the Office of Research, USAID, for funding the network meeting and

publication of this paper.