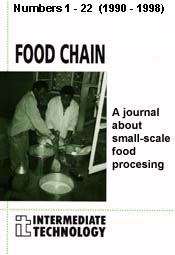 Tens of thousands of tons of netetou is eaten in the region and it is estimated that in northern Nigeria alone some 200,000 tons of seeds are collected each year for processing. Netetou has a strong aroma and is used to strengthen the flavour of sauces that accompany rice and sorghum dishes. A survey in Dakar showed its use in almost all the main recipes of Senegalese cuisine It is frequently associated with other flavouring agents, such as bouillon cubes which are produced industrially and have rapidly increasing sales in Africa. These commercial cubes fit perfectly in local recipes and are sold in small packets that cost 20 to 25 Fcfa (418 West African Fcfc is equal to Ł1 sterling).

Despite the serious competition from bouillon cubes; produced by large companies such as Maggi, who use radio and other forms of advertising to promote their product; netetou remains the veritable 'local cube' anchored in traditional food habits and popular with all classes. It has an advantage in that it can be divided into small pieces and sold at 10 Fcfa, a price affordable by all. In spite of its popularity however it appears that netetou will lose its market share if it does not adapt to the needs of consumers, particularly the urban middle class. As in the case of most traditional African products, there has been little research on netetou and a number of steps in its manufacture and marketing can be improved.

Most of the netetou sold in the markets of Dakar is produced in the lower Casamance region by the women of the area. The amounts produced have increased over the last 20 years. The activity allows the women to diversify, their income from one based on the cultivation of rice and peanuts in which rice production is decreasing and peanut prices are falling. A woman can expect to earn 12,000 to 15,000 Fcfa from each netetou production period which allows her to buy rice and other family essentials.

In the area of Fogny, which lies between the Casamance and Gambia rivers, production of netetou mainly takes place between December and June and at this time groups of up to 30 women come together to rent a traditional building for processing Production levels vary considerably from group to group and season to season. The women hire their labour to a middleman merchant who benefits from their work. Some groups can process up to 15 tons in a season

The nere seeds are delivered to the groups in 120 kg sacks by the merchant. After processing the seeds into neterou the same merchant buys the product for marketing in Dakar. The women receive 2500 Fcfa for each sack they process.

The first step in the production process consists of boiling the nere seeds for 12 to 24 hours in order to soften the outer husk After this treatment the husk is soft enough to allow it to be separated from the cotyledons. De-hulling is carried out in a pestle and mortar to which sand is added, the sand acting as an abrasive which helps to remove the hulls. The next step involves washing to separate the sand and hull. This is a very important stage and has a considerable effect on the quality of the final product The byproducts, sand and husks are used as compost or in building blocks. At this stage the cotyledons are firm and light brown in colour. It takes three hours to hull and wash 25 kg of seeds

The seeds are then re-boiled for up to three hours after which the water is strained off. They are then placed in jute or nylon sacks and allowed to ferment for 48 to 72 hours. During the fermentation the characteristics of netetou develop; pronounced flavour, strong odour and a brown colour. The product is then salted and partially dried to help in its preservation

The main bottleneck in the production of netetou is the de hulling stage. While hulling is long and very hard work the pre-boiling uses large amounts of fuel wood. The project, therefore, researched dry mechanical de-hulling as an alternative to the existing manual method. Mechanical de hulling would totally change the production process and avoid both preliminary boiling and de-hulling by pestle and mortar

Different prototype de-hullers have been constructed with the help of a small local engineering workshop. This assured an appropriate machine in terms of local capacities and facilities The programme is now at the point of having a locally built, powered de-huller with a capacity of 70-80 kg/hr and a 98 per cent hulling efficiency.

Simply- improving the netetou production and raising the productivity of the producers is not enough as the women still remain dependent on the merchants. A market study carried out in Senegal, in order to strengthen the power of women's groups, indicates that the women may be able to carry out the commercialization of the netetou they produce. In parallel a new marketing channel has been tested People born in Fogny who now live in Dakar have set up an organization called Jamooray, consisting of about 80 sellers. It is hoped, through the mutual confidence that exists between producers and sellers, to create a direct market chain for netetou. There have been other experiences of similar marketing networks for palm oil, dried fish and oysters using resident associations in Dakar over the last few years Conscions of the limitations of this approach the regional rural associations are trying to unite through the Co-ordinator of Rural Organizations of Bignona (CORD) and better marketing systems are developing due to the existence of a strong organizational movement in the producer groups

A survey of 250 households in Dakar regarding food consumption has given more detailed knowledge of the use of netetou and negative aspects that may reduce its consumption. The householders all criticized the poor hygienic conditions during both production and marketing. So all users wash the product, and in many cases pound it before using it

Netetou paste, powder and cubes packed in plastic film have now been market tested by householders. The results were very satisfactory and predict the possibility of successfully marketing this type of product. Marketing a product more suitable to the consumer will probably allow a relaunch of the consumption of this traditional product and provide greater incomes to the processors.