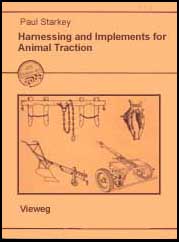 3.1 Harnesses and yokes: clarification of definitions

In both English and French, the word harness (harnais) has been predominantly used in the relatively narrow sense of the straps and fittings used for hitching and controlling horses or donkeys, and dictionaries in both languages generally define harness with reference to horses. For working oxen, the hitching together has generally involved a rigid yoke ("joug" in French), and historically the word "yoke" could also be used to describe a team of oxen. The French word "attelage" has no single word equivalent in current English usage but refers to the system of hitching animals together whether it be the yoking of oxen or the harnessing of horses. (La culture attelee is often used in the same sense as the English phrase draft animal power.) As with the word yoke, "attelage" can also be applied to the teams of animals themselves.

In three influential books published by FAO the word harnessing was used in a more general sense to cover the yoking of oxen as well as the harnessing of horses and donkeys (Hopfen and Biesalski, 1953; Hopfen, 1969; FAO/CEEMAT, 1972). This more general use of the word harnessing to cover all the elements involved in the "transmission" system linking the animals to their working implements (prows, carts etc.) was maintained in the reviews of Barwell and Ayre (1982) and Viebig (1982). The main CEEMAT publication on animal traction in Africa (CEEMAT, 1971) used the French word "harnais" in the restricted sense; however in his comprehensive monograph on the subject Duchenne (1984) opted for the broader definition. These recent precedents will be followed and in this section harnessing will also be used in the broad sense of systems for linking animals to their workloads and, where applicable, to the person controlling them.

The introductory definition and etymological discussion is not merely to clarify some obvious confusions arising from evolution in the meaning of words. It also illustrates an important generalization. Par several hundred years most English and French words relating to the"transmission systems" of animal power in both agriculture and transport have clearly differentiated between the bovine (ox) and the equine (horse, mule and donkey) types. In general bovines are hitched with yokes while equines are harnessed with collars or straps. The distinction is not absolute, for there are examples of equines being yoked and bovines being worked with collars, but if one takes either an historical or a geographical perspective, it is clear that the generalisation apparent in the etymology is almost a universal rule. Thus in this section the standard harnessing/yoking systems will be described first, and the exceptions will be discussed under non-conventional usages.

The wide range of yoking types falls into two main categories, those tied to the horns of the animal and those taking power mainly from the withers. The `'withers" of an animal refers to the part of the back that is over the shoulders, directly above the first thoracic vertebra. In Zebu (Bos indicus) cattle the withers are immediately in front of the hump. 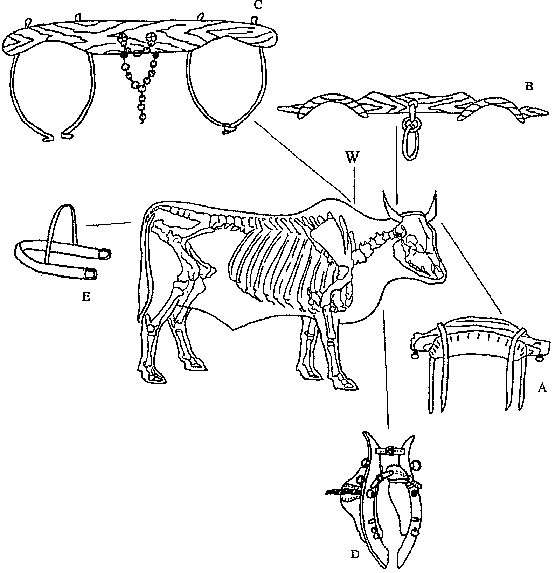 Fig. 3-1: Anatomy of an ox, showing some harnessing options.

After various sources including Duchenne, 1984 and CEEMAT, 1971.

In English historical studies on yoking types the terms "horn yoke" and "head yoke" have been used synonymously, as have the terms withers and shoulder yokes (Fenton, 1973). Technically the shoulders are below the withers, and there are good arguments for dropping the term shoulder yoke, as it misleadingly implies that the power is applied from the shoulders. However the actual meaning of withers is not widely understood so that the term shoulder yoke can be quite useful in distinguishing between different yoke types. In French the term joug de garrot is equivalent to withers yokes while joug de come and joug de tete have both been used for horn/head yokes (Delamarre, 1969; Duchenne, 1984).

Horn/head yokes are occasionally used in front of the horns, where they are described as forehead yokes (joug frontal). More commonly they are fitted behind the horns, and in this position they have sometimes been called "neck yokes" (joug de nuque). However the use of the word "neck" has been the source of considerable confusion in the international literature. Hopfen (1960; 1969) classified yokes tied to the horns as head yokes and described yokes taking power from the withers as "neck yokes". Ramaswamy (1981) followed a similar convention. In contrast FAO/CEEMAT (1972) classified the yokes tied to the horns as "neck yokes", and those resting on the withers as shoulder yokes. Viebig (1982) used a similar classification, although he preferred the term withers yoke to shoulder yoke. Two recent specialist texts on yoking systems have followed the Hopfen definitions and used the term neck yoke to describe the withers/shoulder yoke (Devnani, 1981; Barwell and Ayre, 1982).

Thus although all texts agree that there are two very distinct categories of yoke, depending on the context and source, the words "neck yoke" can refer to either of these different types! Since the neck is defined as the part of the body between the head and the thoracic vertebrae, both yoke types can indeed be claimed to rest at one or other extreme of the neck. Of the two uses, the FAO/CEEMAT definition of neck yoke is to be preferred since it is a reasonable translation of joug de nuque, and there does not seem to be the same confusion in the French language. One of the authors responsible for revitalizing the "neck yoke = withers yoke" definition subsequently used the clearer and less controversial terms head yoke and shoulder yoke (Barwell and Hathway, 1986). This may imply that the withers application of the term neck yoke may be decreasing. However it is recommended that to avoid further confusion over conflicting definitions, the use of the term "neck yoke" should be avoided. Thus the major yoke types will be classified here as hoary/head yokes (joug de come/te15:36:51 e) for those tied to the horns, and withers/shoulder yokes (joug de garrot) for those taking power from the withers.