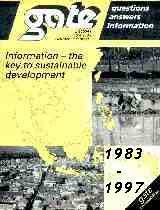 GATE, the German Appropriate Technology Exchange, a division of GTZ, financed and implemented together with the Ceramics Promotion Project of GTZ in Bhaktapur/Nepal the transfer and testing of a new brick burning technology. This technology of a continuous vertical brick kiln was developed in China, several hundreds are in use in rural China. In combination with an extruder to burn hollow bricks it is - compared to the prevailing Bull trench kiln - saving more than 60% of fuel. It is using coal dust instead of fuelwood, occupying only one seventh of the land and saving investment cost.

In Kathmandu valley where bricks are mainly fired in Bull trench kilns, about 250 kilos are operating from November until the rain starts in June. The kilns are fired with a combination of imported coal, local lignite and firewood. About six plants use Chinese made extruders for production, but most bricks are formed manually.

The first phase of the testing programme was demonstrating production of hollow bricks. A small extruder was imported from Thailand. Its advantage over the Chinese made extruders is its low price and that it can more easily be manufactured locally.

The main advantages of hollow bricks over solid bricks are:

Hollow bricks are about 30 % lighter which means fuel saving.

Hollow brick are better insulators making the houses less cold during the winter and less hot during the summer.

As a protection against earthquakes new houses in the valley are constructed with pillars and beams of reinforced concrete. Hollow bricks are ideal for this type of construction.

The hollow bricks are easier to dry and fire evenly.

Production of the bricks has only been going on for three months and it is too early to judge the response of the market. The cost of the bricks will be less than other machine made bricks, but some people feel deceived when buying so much air instead of solid brick and some worry that construction with hollow bricks consumes more mortar.

In May 19901 went to China to study a small continuous brick kiln that has been developed there. The first prototypes were tested in Tongbai country in the province of Henan. Already 37 private brickworks are using this type of kiln in the country and hundreds more are in use elsewhere in rural China.

The kiln is extremely fuel efficient and it is at the same time simple to construct and operate, making it ideal for rural areas in developing countries. The fuel saving was so high that the figures were hard to believe. Ceramics Promotion Project decided to test the kiln in Nepal and brought three engineers from China to Kathmandu to demonstrate the kiln.

The bricks are stacked in a shaft measuring 1 x 1 meter and with a height of 6 meter. Green bricks are loaded from the top in batches of 224 bricks set in 4 layers. At the bottom of the shaft, bricks are taken out at the same rate with a special unloading devise. In average a batch is unloaded every 1 1/2 hour. The kiln has so far been tested only with coal dust. This is spread out evenly between each layer of bricks during setting. Combustion takes place in the middle of the vertical shaft.

The combustion air enters at the bottom of the shaft and moves up through the already fired bricks, so when the air reach the combustion zone it is preheated to about 750°C. After combustion the hot flue gasses move up through the unfired bricks. The transfer of heat to the bricks is so efficient, that the temperature of the exhaust flue gas is low enough to hold a hand over the top exit.

The construction of a kiln with two shafts took two months. In China it is done in three weeks, but in Nepal it was harvest time so every second day was a festival. The inner shaft lining was laid with one layer of green bricks. The space between the inner lining and the outer wall was filled with a mixture of rice husk and brick clay. Local masons constructed the kiln under supervision of the Chinese engineers. It is made from local bricks and clay mortar.

The unavoidable problems with getting funding, approval from local authorities etc. had delayed the programme six months and we ended up starting test firing in the middle of the rainy season. The kiln and the coal was soaking wet and the bricks were hardly leather hard when stacked.

Firing was started in the firebox and the kiln operated normally after about five days firing, but it took several weeks for the kiln to dry out.

Test firing was done with a number of different bricks; handmade bricks, extruded bricks, hollow bricks, and extruded solid or hollow bricks with mixed in coal dust. Some typical figures for fuel consumption are given in table 1.

Firing temperature ist 850 - 900 °C. It is easily maintained by adjusting addition of coal and by regular unloading. The kiln worked especially well when firing hollow bricks with coal dust mixed in the clay.

The results were obtained during the rainy season. Bricks batches were unloaded every three hours during the first month of operation, but as the kiln dried and the rain stopped unloading could take place every 60 to 80 minutes. This equals an output of each shaft of 4,000 to 6,000 bricks per 24 hours. 4 to 6 shafts are needed to replace the daily production of a Bull trench kiln.

As shown, above the fuel saving is considerable, but the kiln has several other benefits:

- Firing temperature is even.

- The quality of the fired bricks can be controlled already 20 hours after loading.

- A kiln with six shafts has the same capacity as a Bull trench kiln but requires only 13% of the land.

- Operation of the kiln is very simple and unskilled workers in Nepal managed to operate the kiln after a few weeks training. This has particular importance in Nepal where migrating Indian workers have monopolized operation of the Bull trench kilns.

- The kiln works well with coal dust which has a lower price.

With a fuel saving of at least 50 % a corresponding reduction of flue gas emission is achieved. Additionally the combustion in the vertical shaft kiln is much more thorough compared to the Bull trench kiln.

During firing no black smoke is seen from the chimneys. In Kathmandu valley, the brick works are consuming 30% of the valleys total energy consumption and therefore they are major contributors to adrastically increasing air pollution.

The Bull trench kilns of the valley use about 100,000 tonnes firewood per season in addition to equal amount of coal. This amount of firewood equals the sustainable yield of a forest area of 130,000 hectares in the low lands of Nepal.

Replacing the kilns with vertical shaft kilns would completely eliminate the need of firewood, thereby reducing the grave deforestation problem of the country.

The testing is not yet finished, still the results achieved so far by the GTZ sponsored test programme in Nepal clearly demonstrate the advantages of the vertical shaft kiln over other kiln types available for brick production in developing countries. The kiln's minimum 50% fuel saving carries a promise of saving fuel on a really large scale and it will in areas now relying on firewood save vast areas of forest.

In Nepal and many other developing countries, the brick industry is the major industrial energy consumer and the fuel saving would improve the overall economy and reduce emission of pollutants.

The kiln can be used for any type of bricks, but when setting up programmes for introducing this new kiln it is worthwhile to consider introduction of production of hollow bricks too.

In Nepal the test programme will be continued until May 1992 and a programme for dissemination of the kiln throughout Nepal is in the planning. German Appropriate Technology Exchange (GATE) is now planning to introduce the kiln in Pakistan and possibly elsewhere.

If you are interested in more information, please address your enquiry to Klaus Rudolph in GATE.