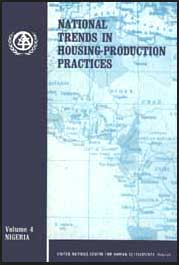 A. Scope and scale of the shelter problem

There is no city in Nigeria where the "housing failure' is more manifest than in Lagos. The legal acquisition of land is far beyond the means of most people, as buildable land is in short supply; opportunities for employment are very limited and the rate of population increase is high, thereby compounding the problematical housing situation.

Added to the above, it is common knowledge that prospective rental seekers have to queue up for more than a year on "the waiting list" before they can even be considered eligible for or become fortunate enough to secure a rental unit. Ownership of a house is a dream realized by only the upper 5 per cent of the income groups in Lagos. Sometimes prospective renters are persuaded to assist landlords to finance the construction of a rental house by paying one or two years' rent in advance, in order to rent a room/rooms or flat whenever it is completed (Achunine, 1977: 8-9). Many other sharp practices of this nature go on in the housing market in Lagos. Evidence abounds, but it is unfortunately never documented.

There are more migrants moving into LMA (mainly in search of jobs) than into all other cities in Nigeria put together. For example, between 1952 and 1963, the population of municipal Lagos rose from 267,407 to 665,246 - an annual increase of 8.6 per cent. Outside the municipality have amassed a further 424,622 people since 1963, making a metropolitan total of 1,089,868. The metropolitan population therefore grew by 19.2 per cent per annum. The figures of the 1991 Census for Lagos are not readily available, but it is generally believed the population of Lagos which was about 2.5 million in 1973 has risen to more than 3.0 million at present.

In order to cope with the fastrising population in Lagos, it has been estimated that about 100,000 additional residential units are required each year. Yet there is evidence that nothing near this target is being built each year, either by government and its housing agencies or by private individuals in the Lagos area. In more recent years the situation has not improved considerably. For example, if approved building plans are anything to go by, about 400 housing units only are supposed to be completed monthly in 1991, making a total of 4800 housing units annually.

In many parts of Lagos, especially where the poor and low-income people live, there is congestion, very high densities and high occupancy ratios which create insanitary conditions. The overall infrastructural facilities are likewise not adequate for the ever-increasing demands placed on them - resulting from a high rate of population growth which has been increasing steadily. The provision of water, power and transport facilities is woefully inadequate. Methods of disposal of solid and liquid wastes are sometimes rudimentary. There are open gutters which serve as havens for malaria-carrying mosquitoes and flies. Such inadequacies in the provision of infrastructure has had a tremendous impact on the production of housing. Sometimes it has led to existing units being lost to the market through obsolescence, demolition, inaccessibility and similar factors. Residential houses become substandard within a short period of being erected and many are outright uninhabitable.

There are essentially three categories of dwelling units in LMA, i.e., single homes, flats and rooms. Table 24 shows that three out of every four households in Lagos are living in the rooming-type of dwelling unit. As can be seen from the table, single houses are significantly more common in Lagos than in urban areas in general (see table 9). It should be noted, however, that the figures do not necessarily reflect the housing stock per se, since many of the households reported as staying in the rooming-type may actually be sharing a "single houses" with several other families. The number of single houses is thus probably understated.

In view of inadequate statistical data and in the absence of detailed relevant surveys, housing need calculations for the LMA should be kept as simple as possible to avoid major errors and still retain valuable indices of the housing deficit. It should be expressly noted, however, that any housing need calculation which is based on data as incomplete and fragmentary as those of Nigeria, must be treated with caution and should not be accepted like similar computations in more developed countries which have available complete, reliable and accurate statistics.

The population increase in LMA between 1970 and 1974 was projected to be about 239,000, compared with about 887,220 between 1976 and 1985. With an average household size of five, this translates into a need for 47,800 plus 177,440 units, giving a need for 225,240 dwelling units (see table 25). Yet, this is not the only factor contributing to the total housing need. A total of about 112,000 units needs to be constructed to replace units demolished to make room for various public works. The major economic development projects that resulted in the demolition of housing units during the 1970-1974 plan period was the Agege Motor Road Improvement. This, according to FMW&H, affected 50,000-60,000 people, or a total of about 12,000 dwellings. During the 19751980 plan period, more road and bridge constructions were undertaken affecting 100,000 people. In addition to this, more than half a million units of low standard need to be replaced, while another 60,000 units need to be replaced for other reasons.

A total of 22,000 units were required annually during 1970-1974, compared with 76,000 units annually during the 1975-1985 period. When this estimate is compared with the Government's projected estimate of 1 2,000 dwelling units to be built per year from 1975 to 1980 for the entire country, there is evidence of inaccuracies in the estimation. During the years 1981-1982, the figure was increased to 200,000 dwelling units for the country which was still inadequate. Yet the crucial and unanswered question is: how many of these projected number were actually built, and, how many of them in Lagos, which needed at least 22,000 to maintain a minimum standard?

The demand for houses in Lagos comes from first renters (new households and existing households formerly occupying dwellings of different tenure) and households that are already housed but need to acquire better houses. On the supply side, part of the demand by first-time renters or occupiers is met from dwellings vacated by people moving to better houses. Other houses come on to the market as a result of new construction, out-migration (through transfers and family dissolutions through divorce, death or old age). Tables 26 and 27 summarize the demand and supply for housing in Lagos during the 1976-1985 period. Based on these figures, Achunine (1993) has estimated the total deficit for the period to be nearly 240,000 units.

The forecast of effective demand for new houses does not necessarily follow from the demand and supply sections of the above tables simply by subtraction. Some of the houses vacated or newly built may be of a character and in a location inferior to what renters/ purchasers want and can pay for. So they are likely to remain on the market for sometime. But in a place like Lagos with an acute housing shortage, it is doubtful if there would be any such vacancy.