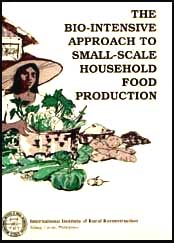 This is an approach that utilizes different techniques other than the use of chemical pesticides to control pests. It involves natural pest population-control methods, including cultural and biological controls the use of botanical pesticides as needed.

These methods are aimed either at reducing the sources of inoculum or at reducing the exposure of plants to infection. Its primary objective is the prevention of pest damage and not the destruction of an existing and damaging pest population.

This is the first important element in pest control strategy. A healthy soil means healthy plants which are relatively more resistant to pests. A soil rich in humus hosts a wide variety of beneficial microflora that trap nematodes and destroy or keep in dormancy disease organisms, thereby encouraging beneficial insects. 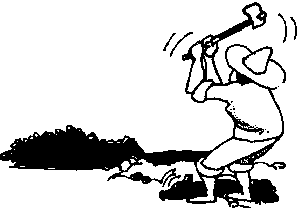 2. Use of indigenous varieties

Traditional varieties are hardier and relatively more resistant to pests. They can withstand harsh environmental conditions better than modem hybrids. 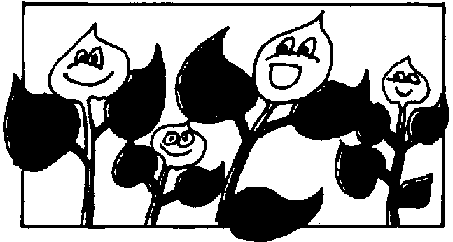 Use of indigenous varieties


3. Pest control through the use of mesh screen (nylon nets)

Younger plants are usually preferred by insects and they suffer significantly from such attacks when compared to older plants. Therefore, a single netting over the plants during the first 3045 days of their growth can reduce pest damage. Also, the net helps diffuse sunlight thereby improving the quality of some vegetables. Finally, the net breaks the impact of raindrops thus (i) reducing physical damage to the plant and (ii) reducing soil erosion from the beds. 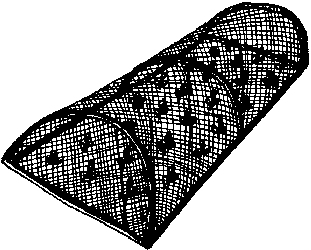 Pest control through the use of mesh screen

Removal of diseased plants or plant parts prevents the spread of microorganisms to uninfected areas. 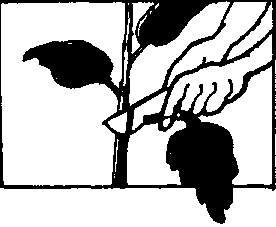 Several types of odorous plants can be grown together with the main crop to repel insects. The following are some examples:

Pests can be controlled by their natural enemies. By growing a variety of flowering plants, specifically those belonging to Umbelliferae family, such as, fennel (Foeniculurn vulgare) and celery (Apium graveolens), insect predators will be attracted to stay in the garden. These beneficial insects feed on pests, keeping the pest population below economic injury level. 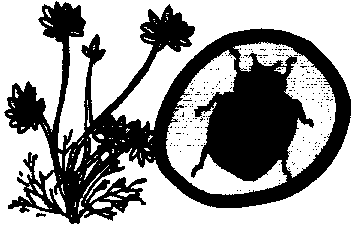 This provides genetic diversity to minimize pest increase. Variation in susceptibility among species or varieties to a particular disease is great. Given abundant hosts of a single species or variety, a pest could easily be spread from host to host. When the number of hosts declines, the pest incidence will also decrease for lack of necessary food for the organism. 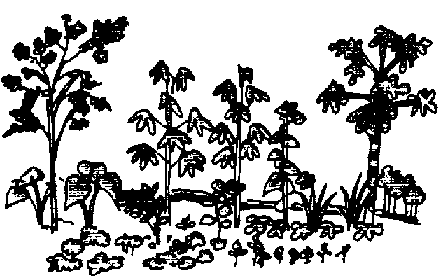 This is a practice of following a crop susceptible to a pest by a resistant crop. There is no build-up of the organism to a high level since the growth cycle of the organism has been broken. 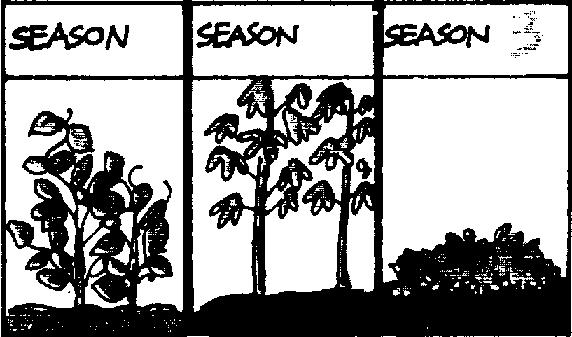 Biological pest control is the suppression of pest populations by living organisms such as predators, parasites and pathogens. These agents are responsible for keeping pests under control most of the time.

Predators are usually other insects and spiders. Both, but particularly spiders, feed on a wide range of insects. Adults and immatures are often predatory.

Feed on all types of insects. 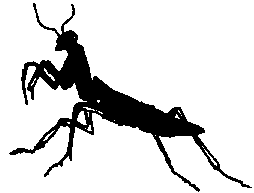 Feed on other insects. 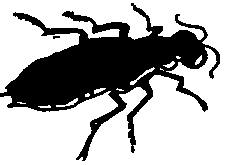 
· Ladybird beetles feed on scales and aphids only. They eat 40-50 insects per day. Their larva eat even more. 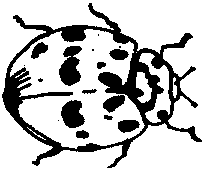 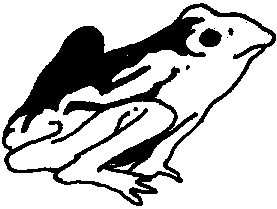 Some birds are omnivorous. Some examples from the temperate zone provide a good illustration of what birds eat. A house wren feeds 500 spiders and caterpillars to her young in one afternoon; a brown trasher consumes 6,000 insects a day; a chickadee eats 138,000 canker worm eggs in 25 days; and, a pair of flickers eats 5,000 ants as snack. 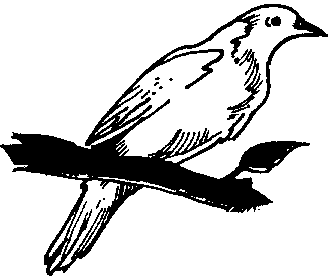 
Parasitic insects are usually small flies or wasps which attack one or a few closely related pest species. They are parasitic in their larval stages but free-living as adults.

Complete their life cycle on insect pests. They usually attack the egg of the host pest or the caterpillar by laying an egg into its body. The wasp larva hatches inside the caterpillar body and feeds on it. 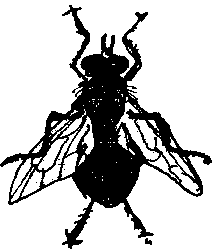 Attacks eggs of butterflies and moth. This wasp produces very few side effects on beneficial insects. 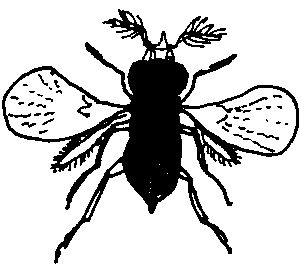 Feeds and reproduces on mealybugs of cassava. It has the ability to establish itself in cassava fields. 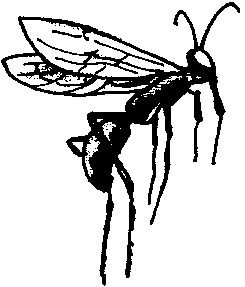 In nature, pests are usually controlled by the presence of insect predators and parasites which keep the populations of the harmful insects in control Most of the insects in nature are either beneficial or at least harmless. There are many ways to encourage insect predators in one's garden.

1. Create a Suitable Habitat for Insect Predators -- Flowering shrubs and trees throughout the garden will attract many beneficial insects, including parasitic wasps which require pollen and nectar for their growth and maturity. Plants belonging to Umbelliferae family are particularly effective in attracting natural enemies of pests. 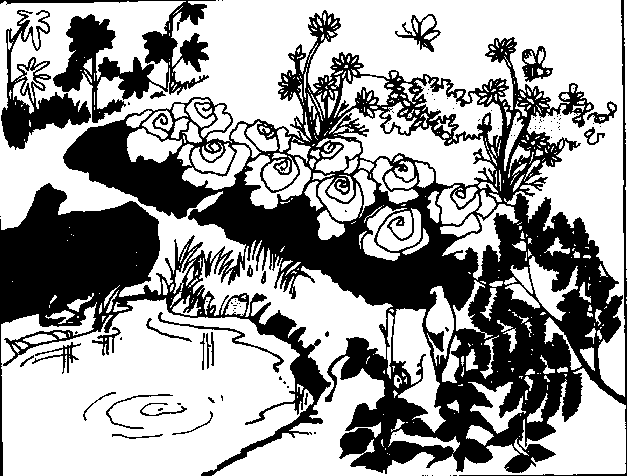 
3. Create Nesting Sites for Frogs, Reptiles and Birds ~ Logs of dead trees, irregularly shaped rocks with crevices and cavities and plenty of mulch can be a good nesting sites for snakes, lizards, frogs, rove beetles and carabid beetles, which feed on insects.

4. Increase Humidity by Providing Water Holes -- Humidity is much needed for the survival of natural enemies. It serves as a source of drinking water for reptiles, birds and frogs. Many predatory insects live in, on and near water. Well-vegetated small dams, little water pools and swales scattered throughout the garden will create conditions for the build-up of natural enemies.

5. Practice Mixed Cultivation -- Growing mixed crops and harvesting them in strips help maintain natural enemies and confuses pests. For fungal pathogens, the practice of mixed cropping is desirable as the root exudates of another crop can be toxic to the pathogen. Mixed cropping also encourages soil microbes which, in turn, act as barriers to the fungal pathogen.

6. Reduce Dust Build up in Crop Plants -- Dust inhibits the functioning of natural enemies. Growing well-designed windbreaks and ground cover crops like centrosema and lablab bean will reduce dust. Use of overhead sprinklers will also help periodically in washing off the dust.

c. insecticides with short-term residual action rather than persistent action.

Improved application method should be developed and minimum doses should be applied.

1 Found effective, based or crude assay but further studies are needed to determine safety and residual action.

2 Names in italic are scientific names; names in parenthesis are common/local names.

3 Based on indigenous practice of farmers.

4 Mortality is 30% or more with crude extracts.

CariĂ±o, F. A. and B. Morallo-Rejesus. 1982. Isolation and characterization of the insecticidal fraction from Tithonia diversifolia (A. Gray) leaves. Ann. Trop. Agric. 4:1-11.

Morallo-Rejesus B. and A. Decena. 1982. The activity, isolation, purification and identification of the insecticidal principles from Tagetes. Phil. J. Crop Sci. 7:31-36.