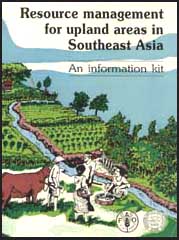 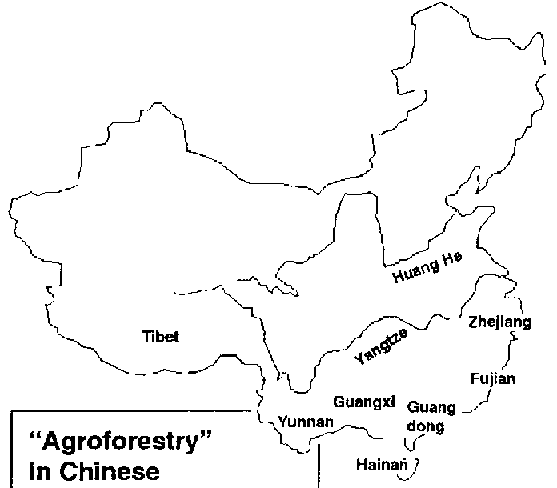 · Crop-based agroforestry can produce both woody and agricultural products, improve the physical environment and increase farm productivity. For example, during winter and early spring the trees have no leaves and, therefore, do not affect the growth of the crop. However, during late spring and summer, the trees can reduce wind speed (by as much as 30%), reduce soil evaporation (by 10%) and increase air humidity (by about 5%), all of which enhance grain yields

· Firewood collected from the trees provides cooking materials, reducing the pressure on forests and saving straw and animal manure for use as organic fertilizers

· Intercropping with fruit trees can fully utilize land and labor resources, give better vegetative cover for soil and water conservation and provide products for humans, fodder for animals and green manure to improve soil fertility.

· Fruit tree production can be a profitable enterprise. However, risks of overproduction of fruits do exist. For example, in some parts of China, yellow peach trees were replaced with other fruit trees because of low market prices. Ecological risks also exist. For example, in recent years citrus trees have been planted on land where other crops have not performed well due to low temperatures.

· The system is usually small in scale. However, the potential to generate income is generally very high.

· Homegardens are very flexible and can allow adjustments in production as prices change. In addition to providing income, homegardens contribute to the nutritional improvement of a household, as well as improving the beauty of the homestead.

· As well as producing tea, the system yields other products such as fruits, firewood, fodder and green manure. 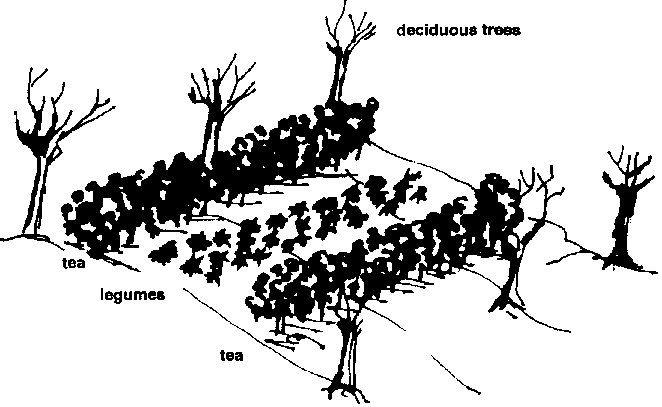 · Crops such as sesame that share common pests with tea should not be used as an intercrop.

· The proper selection of pesticides and timing of application on the intercrop are important to avoid pesticide residues on the tea.

· Rubber-based agroforestry requires an intensive use of technology and material inputs. Technical aspects to be considered include the selection and proper arrangement of the species

· Intercropping between timber trees can effectively balance short-term and long-term benefits. Better vegetation cover can reduce soil and water erosion. Cultivation and fertilization can promote the growth of both crops and trees.

· Land preparation for tree planting and intercropping can destroy the natural vegetation. Serious soil and water erosion can occur after heavy rains and before the intercrop is well-established. This affects overall soil degradation, as well as reducing the yields of the crop and tree species.

· For these reasons (and others), this system is not welladapted to the conditions of individual farm households.

· This agroforestry system can help balance the conflict between the long-term economic benefits of timber production and mediumterm livelihood opportunities. It can also meet the increasing demand for high value medicinal plants like ginseng.

· Susceptible to fluctuations in market prices for medicinal plants.