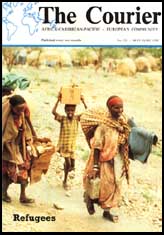 Botswana is slowly but surely shaping its image- not just an economic one, but a tourist image, too, that will make the country one of the most sought-after places for holiday-makers in the whole of Africa. And the progress and success of . the tourist trade are all the more encouraging in a country which is one immense desert, for the Kalahari dominates Botswana, the useful part of which was for years only Gaborone, the capital, and the surrounding area. But Botswana's Kalahari is nothing like the Sahara or even the Namibian Kalahari made famous in " The Gods must be crazy", some of which was filmed in Botswana.

Botwana's Kalahari is no ordinary desert. A visit will convince the tourist of the extraordinary wealth of the countryside where beauty beckons with every prospect of relaxation and the discovery of wildlife. So, whether one reaches the Kalahari from Gaborone or Zimbabwe or Namibia, a variety of colourful scenes await the visitor.

Fly west or north-west from Gaborone in a twin-engined light aircraft and you can see the open-cast copper and nickel mines at Selebi Phikwe and the sodium mine at Sua Pan where a Government project could mean exports of more than 250 tonnes of soda and some 700 000 tonnes of salt to the region in 1991, particularly to South Africa. And with an experienced pilot, you can fly low (a dozen yards) and see hundreds of pink flamingos at Makgadigadi.

A stop-over in the heart of the Kalahari at Maun, a little aerodrome where the many take-offs and landings are choreographed like a ballet, shows just how many visitors there are. In the restaurant, too, there is no mistaking the varying origins of the tourists. There are Europeans, of course, Germans especially, and Americans and South Africans, who apparently prefer Botswana to their own national parks, which are highly sophisticated and not nearly so natural.

Press on towards Moremi in the Okavango and see the country's vast range of tourist attractions unfold before you, encampments where well-appointed lodges offer visitors the rare opportunity of seeing rhinoceroses, elephants and all the beasts of the savannah only a few yards away.

And when the wildlife palls, there are cruises. Surprisingly, there are rivers crossing the Kalahari here and there, winding through the papyrus, particularly in the Okavango Delta, and boat trips are a chance to spot the many crocodiles and admire the thousands of species of birds which live in this seeming paradise.

Instead of spending hours cruising around the river network, you may prefer to fish for the tastiest of foods, helped by natives who are highly skilled in identifying aquatic animals and speedily recognising the different types and the sex of birds.

And after the Delta, there is the heart, the very centre of the Kalahari. The plane lands on make-shift strips where the pilot takes his bearings from a Canadian recluse in a Range Rover and lands under the amused gaze of some springboks. These southern African antelopes (also called gemboks), with their elegant hides and bearing, can stand great heat and go for several days without water and they are the dominant feature of the central Kalahari, in Xaxa for example, where, believe it or not, a team of prospectors from De Beers, the diamond giant, has pitched its tents and set up its machinery, a strange contrast amidst the antelopes.

Botswana's tourist potential is considerable and the sector could make a major contribution to the diversification of the economy. The Government is particularly aware of this and has recently brought out a draft paper on tourism and earmarked P 500 million ($ 250 million) over a five-year period to channel into basic infrastructure and facilitate private tourist investment. Germans and Americans are already settling in the Okavango region.

But tourism means protecting the natural environment and the wildlife (see box). "This activity is an industry which should prevent the destruction of the country's ecology"' says Trade and Industry Minister Kedikilwe.