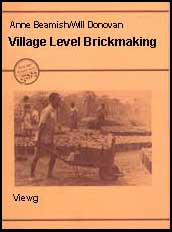 Wood should only be used for firing bricks if your area has a plentiful supply of firewood and no coal or alternative fuel. Brickmaking uses such large quantities of firewood that its use could mean less firewood for cooking in the village, or even lead to deforestation. Because there are few areas with forests that can supply industry as well as for domestic use, every brickmaking unit should establish a woodlot to supply their needs and not depend on the existing forests.

One major advantage of firewood over coal or oil is that it is renewable. Using firewood for brickmaking does not have to lead to deforestation if the producer takes care to either match production to the capacity of the forest to supply fuel, or if the brick producer establishes woodlots to supply their own fuel.

If you own or are a member of a brick production unit, you have a responsibility to the community not to deplete the supply of firewood which is used for domestic use or to cause deforestation. An average family of four uses at least one cubic metre of firewood per year. If a brickmaking unit was established that produced even 20,000 bricks per year, the amount of firewood needed would be equivalent to the firewood used by 60 new families moving into the village.

Because there are so few areas with forests that can supply firewood for domestic use as well as brickmaking, it will be essential for you to establish a woodlot. There are certain trees such as eucalyptus that are very fast growing and can produce more than 20 times the annual growth of a natural forest. Well managed woodlots can yield from 25 to 60 m3 of firewood per hectare per year. (one hectare = 10,000 m2 or 2.471 acres.) In comparison, a natural forest may yield only 2 to 8 m3 of firewood per hectare. However, there will be a delay, from 4 to 8 years, between planting the trees and harvesting them.

The amount of land required for the woodlot will depend on the amount of fuel needed to fire the kilns. If you were to fire 20,000 bricks per year, requiring 60 m3 of firewood per year, you would need a woodlot of approximately 2 hectares with an annual yield of 30m3 per hectare to supply your needs.

The following is a list of issues to consider and steps that a village brickmaking unit will have to go through to establish a woodlot.

Purpose of the Woodlot

The first and most important decision that must be made by the management of a brick unit or the membership of a brick cooperative is: What is the purpose of the woodlot?

- is it to supply only the needs of the brick unit?

- or should it also produce enough to supply cooking fuel for the village?

If this fundamental decision is made, it will simplify the rest of the decision making that must be done and will help those who will advise the brickmaking unit. Once this decision is made, a small group of people should be appointed to investigate and obtain information on how to establish a woodlot.

The next step is to start to contact local officials and government departments to discuss your decision to establish a woodlot. They will be able to give you most of the essential information and advice that you will need.

Local officials might include village presidents, head men, chiefs, district administrators and district development officers. Government departments that should be approached are agriculture, the department responsible for assigning land and most importantly, the local forestry department. They will all be able to advise and support the project in a number of ways.

There are many factors to consider when deciding where to place the woodlot. Most importantly,

- it should be as near as possible to the brick site to decrease the expense of transport.

- if the woodlot is also to produce fuel for the village, it should be situated relatively near to the village.

- it is also very advantageous if it can be located in an area where the forestry department is active and involved in afforestation.

- the site should not be located in an area that is used for grazing or other agricultural purposes.

- it is also best if the site is relatively flat with good soil;

- has a sufficient supply of water all year; and

- if you are to also start a nursery, there should be an adequate and continuous supply of water to water the seedlings; and

- there should be protection against extremes of climate such as heat, frost, hail, and wind.

- also check the ownership of the land early in the planning stage.

The size of the site will depend on:

- the amount of firewood needed each year,

- the yield of the woodlot per hectare,

- the number of trees that will be planted each year and

- how long it will take before harvesting can begin.

The organization of the site should take into consideration how the trees will be cut and moved and how the timber (if any) will be sold.

Cooperation with the Forestry Department

Cooperating with the local forestry department will greatly benefit any brick making unit that plans to establish a woodlot. They are experts in the field and will be able to supply invaluable information and advice. Often forestry departments have special projects that work exclusively with groups establishing village woodlots.

The forestry department will be able to give you information on:

- the types of trees to plant given the soil and rainfall in your area,

- nurseries in the area,

- the costs involved in starting and running a woodlot,

- how much labour is needed

- how to organize your labour,

- how to protect the trees from animals,

- the number of trees to plant,

- where to place and clear the site,

- how to establish a nursery (if necessary),

- when to sow the seeds since seedlings must be of the right size by the start of the planting season,

- how to plant the seeds (in seedbeds, in individual containers, in planter flat trays or in empty beer or soft drink cans cut in half),

- when to plant the seedlings,

- how to care for the trees, and

- they will likely also be able to assist in any staff training.