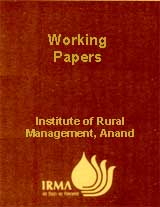 This research has certain important implications for IRMA:

Firstly, it has implications for the girls who are currently undergoing the program. Since their male class-mates have stereo-typical and less favourable attitudes towards women managers, the girls may face a role-conflict. The girls consider themselves to be capable as is evidenced by their higher scores, but the social circle in which they interact, gives opposing signals. This may result in constrained social interactions and lead to a high degree of work-stress.

Secondly since the girl students are tokens ( 6 girls and 119 boys), and the dominant group has unfavourable and stereotypical attitudes, these girls are bound to face the three perpetual consequences of tokenism : visibility, contrast and role encapsulation. The effect of this on the token has already been mentioned in an earlier section.

Thirdly, since there is no attempt on the part of IRMA to remove the stereotypes that the male students have, when these men graduate and take up/resume managerial positions, they will carry these stereotypes to their work place. Thus, they will be biased in their treatment of women colleagues and subordinates. When they reach responsible positions they may discriminate against women in recruitment compensation and promotion decisions.

Fourthly, the women who are currently employed perceive that they are capable but, their bosses and male colleagues do not appear to. Hence, a lack of fit may arise giving rise to self-limiting behaviour by the women and may result in higher levels of attrition. The same tendency may manifest itself in the female students when they take up a career.

Fifthly, the co-operative and other sectors to which IRMA caters, are relatively more conservative. There are hardly any women even in lower managerial positions in these sectors. This implies that the existing organisational climate is such that it puts barriers against entry of women. The few women who may manage to enter these organisations immediately become tokens and hence cannot influence the attitudes of the men in the organisation. Discrimination is a system phenomenon and requires system-level intervention to make a change. The presence of a very small group of women can hence exert no influence at all in the organisational attitudes.

Sixthly, drawing from the above, if attitudes of the organisations to which IRMA caters, is to change, then either outside intervention (in the form of legislations, quotas etc.) is required to shift proportions or, sufficient number of dominants who have favourable attitudes, should flood in and influence the system. If every man trained in IRMA goes with a positive and favourable attitude towards women managers, in a few years time there could emerge a shift in the attitudes of the other men in these organisations. However, since the men trained in IRMA continue to hold their stereotypical attitudes, they will only perpetuate the existing discriminatory systems.

Seventhly, the women who are currently employed in or will take up jobs in organisations of the nature expressed above, would, in the face of blocked opportunities, feel a sense of powerlessness. This, combined with tokenism would make them into employees with low aspirations, low self esteem and a high feeling of dissatisfaction and resentment towards the organisation. This may lead to a lack of commitment to the organisation, hostility towards the leaders of the organisation, and ineffective behaviour as employees. Further as they become socially isolated and personally stressed, they would start to seek avenues for ‘escape’ outside the organisation. If they are unable to find personally satisfying relationships outside the organisation, they may end up being mal-adjusted individuals in society. Thus, not only would the organisations lose a large measure of human talent, but, they also run the risk of making intelligent and capable individuals either into dead-wood or into belligerent rebels.