It is important to give work animals a place where they can eat and rest unbothered by weather, insects, other animals, and uncomfortable restraints such as hobbles, short ties, and narrow stalls. In the tropics, animals do not need elaborate shelters, but stabling them in dry, comfortable surroundings contributes to their overall soundness and work value.

A lean-to with a straw roof provides shelter from heat, rain, and wind. A simple lean-to is a wall four or five meters long and two and a half meters high, with a canopy on one side. It is built on

high ground so water drains away. The wall is situated so it blocks prevailing winds, and the roof made on the side opposite the wind. An earthen floor is adequate, but straw or sand should be kept in the area where the animal sleeps, or "beds down." Horses often prefer standing to lying on a hard, cold, or wet surface, so owners should make special efforts to ensure that bedding is ample.

infections. It makes excellent compost, but should not be piled or stored near the stable area.

A smokefire made from a green log or slow-burning stump helps keep the shelter area free of mosquitoes and flies.

A manger, trough, or rack can be built into the wall of the leanto to hold hay, grain, salt licks or water buckets. 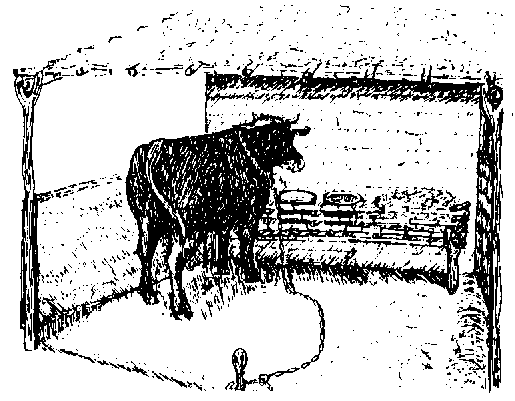 A lean-to can be made into a stall, or "box stall", by closing off the three open sides with a wood fence or mud walls. The sides should be sturdy and high enough so animals cannot Jump out. A stall for one horse or bull should be approximately 25 square meters.

A stall may be expanded into a pen or small corral where two or more animals are kept. Usually, animals can be left at liberty in this area, but if they compete for food or fight, they must be tied, or kept in separate pens within the larger area. If they are tied, they must be able to reach individual feed and bedding areas without getting tangled in their ropes (see below).

Horses are more active than either donkeys or bulls and so it is advisable to let them move freely in a stall or corral. Tying them or keeping them in narrow stalls can cause them to develop nervous habits such as weaving, kicking, pawing, cribbing (locking the lower jaw against a stallboard or feed trough and sucking air), halter pulling or refusing to lie down.

There are many instances, both in the stable and field, when owners must tie, hold, or immobilize their animals. Controlling their movements without hurting them requires proper use of ropes and basic harness equipment. Improperly tied, animals may suffer from fatigue, rope burns, limb injuries, poor posture, or nervousness due to boredom or fear. Serious injuries or strangulation can result from use of slip knots or very short ties.

Animals tied in a lean-to or stall should be fastened on a line Long enough to permit movement and access to feed and bedding areas. The line is attached to the base of a support pole or to a stake, using a fixed loop. A fixed loop is one that does not "slip," or close around the stake; the animal should be able to circle the stake without "winding itself up." The top of the stake should be broader than the diameter of the loop so the loop cannot be pulled off.

The free end of the stake rope is attached to the animal's halter. A halter is a piece of rope which fits over an animal's head and muzzle and allows the owner to lead, tie, or control it. The halter's design makes it strong, safe, comfortable and easy to use on cattle, horses, and donkeys.

A simple halter can be made of strong soft rope.

The halter is especially useful during training because it allows the trainer to control an animal's head from three points. It is superior to single-point attachments such as the hornrope or nosering for this reason.

Improved Halter For Cattle Or Equines

Each draft animal should have a permanent halter so it can be led or tied easily. The halter also can be used like a bridle. Reins or "lines" are attached to the side rings so the head can be pulled right or left for turns, and straight back toward the chest for stopping and backing-up.

Local craftsmen can make strong, comfortable halters from leather, heavy canvas, or flat-wound rope. Rings and buckles are made or bought. How to Put on a Halter

• Make friends with the animal. Talk to it, touch it, feed and water it, clean its stall, occasionally give it a tidbit or hand-feed it salt. Let it get used to you. If you can pat it on the neck and touch its nose and ear, you can probably slip the halter on.

In the case of cattle, especially horned varieties, it is safest to catch and tie the animal before attempting to place the halter. Use the method shown. If the animal is obviously very docile and used to handling and you want to do it without ties, be alert to circumstances which may cause it to toss its head and injure you: fast movements, flies, sudden noise, approach of another person or animal.

• Stand next to the animal's left side, facing the side of its head. Hold the free end, or poll piece, in your right hand, and the noose-like noseband in your left. Let the rest of the halter hang free. 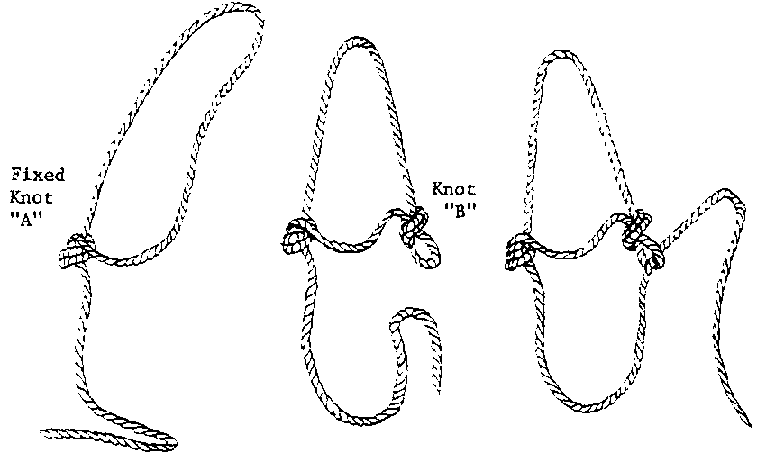 
• Make a large loop 1 m in diameter at the end of a rope 3 meters long. Use a fixed knot for Knot A; do not use a slip knot.

• Make a small fixed loop about onethird of the way down one side of the large loop. This is Knot B.

• Pass the free end of the rope through the small loop made in the second step.

• Place the halter over the animal's head so that the non-slipping portion (the headband) fits behind its ears. The slipping section (noseband) fits over the muzzle. 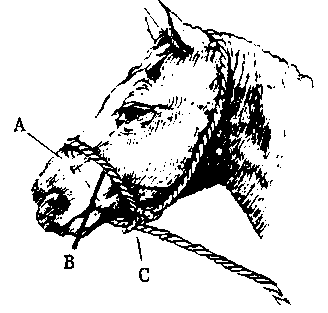 Halter showing where additional ropes may be tied to give maximum control of the head during turning or stopping (A,B,C). 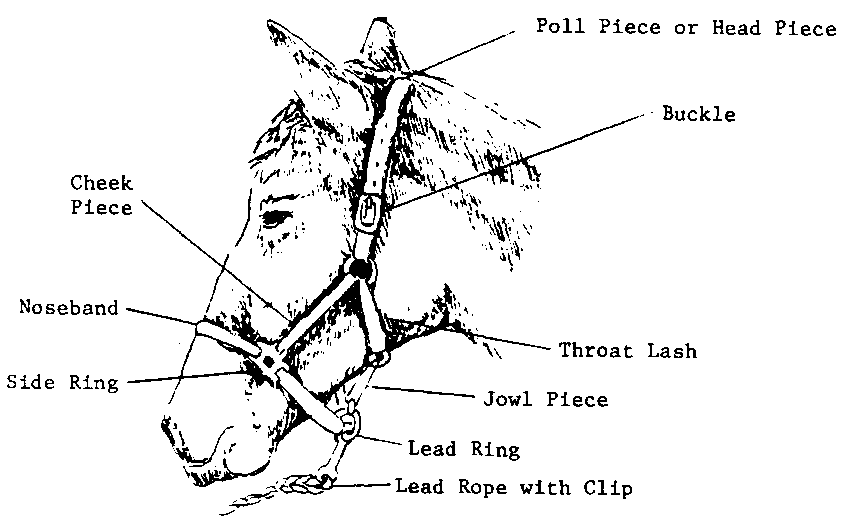 • Pass the free end under the animal's jaw and up toward the right ear. At the same

time, begin to slip the noseband over the muzzle. If it tosses its head, try to move with it; speak to it in a low, soft tone.

• If your right hand is high enough on the cheek, there will be enough tension on the noseband to keep it in place while you use your left hand to grab the tip of the poll piece.

• Feed the end of the poll piece through the ring or buckle of the cheekpiece. The more you tighten it, the higher the noseband rides on the muzzle. You want the noseband to circle the muzzle-not squeeze it. You should be able to slide your hand (flat) between the band and the muzzle.

Alternative Method for Tethering a Bull

• Have a local blacksmith take a one-meter piece of iron and bend it into an open, spiraling screw. Hang it from the bull's neck on a piece of strong cord and feed the last link of a chain onto the spiral.

• Tie the other end of the chain to the stake rope (a short length of strong rope which is permanently attached to the stake with a fixed loop so that the rope will not wind itself up).

• The stake may be made of a broken milling pestle or any strong, tapered stick.

Tying animals by the legs or horns on a regular basis is a poor practice. Constant rubbing produces burns, soreness, and infection. In some cases the animal tries to protect the tender area by kicking out, refusing to be handled, or shying away.

Cattle wearing noserings should not have heavy chain attached to the ring, as this discourages normal carriage of the head. Noserings 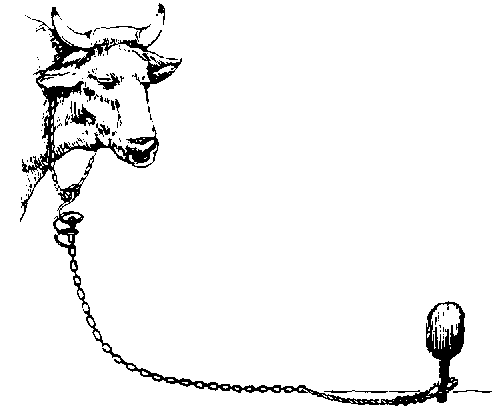 
While noserings can be helpful for controlling very tempermental, headstrong animals, their use can often lead owners into the bad habit of "dragging" them from the front instead of driving (guiding) them from behind. Some stockmen feel that immediate "ringing" (placement of the ring) sets the stage for training by showing the animal "who's boss." But in most cases animals selected for work purposes can be handled and controlled with halters. Causing them pain or fright, especially during the adjustment period, may make them too nervous to eat, drink, or rest.