This section will deal first with methods of catching and restraining, and then with actual training procedures. Information on harnesses and types of hitches (ways of connecting individuals or teams to loads) is given in Chapter 5, Harnessing.

Owners must be able to catch, restrain, and immobilize their animals for examination, treatment, or harnessing. Young animals and older ones which haven't been handled much may be very unmanageable at first. Catching and controlling them without hurting them, or oneself, is a matter of establishing and maintaining physical advantage through use of mechanical force. The techniques detailed below are recommended because they are safe and easy to learn, and require minimum equipment.

An experienced stock handler can catch an animal by throwing a noosed rope, or lasso, around its head or feet. Learning to do this takes much time and practice, so beginners will want to use other techniques.

Choosing the right technique is important because animals that repeatedly outsmart or overpower their trainers become headstrong, inattentive, and increasingly hard to handle. Before trying to catch an animal, watch its movements, judge its disposition, and decide which measures are most likely to work.

The methods described are used for catching an animal which is loose in a corral.

1) Make a running noose at the end of a 3-or 4-meter rope. This is done by tying a fixed loop, or honda, at one end of the rope and then threading the opposite end through it.

2) Approach the animal slowly and slip the noose around its horns. If it shies away, speak to it in a low, calm voice and approach it from another angle. Once the rope is on the horns (or tied to the halter if the animal has one), lead it to a post or hitching rail and tie it so its forehead is close, but not against, the wood. This is called "tying the animal on a short lead."


3) If the animal is frightened or unruly, lock its horns and head securely against the wood by carefully shortening the rope.

4) If the animal kicks or swings its hindquarters while being yoked or harnessed, attach a rope to a rear leg.

(for animals accustomed to some handling, but which shy, balk, or butt at the approach of the trainer)

1) Hang a running noose on the end of a 3-meter pole. Holding the pole in one hand and the free end, or shank, of the rope in the other, approach the animal slowly and position the noose in front of its hind leg.

2) Use your voice and body position to make the animal step toward the loop. Be prepared to drop the pole and pull on the rope as soon as the foot is inside the loop. Pull up and back; if you simply pull back, the noose will slide out under the hoof and you will have to try again. 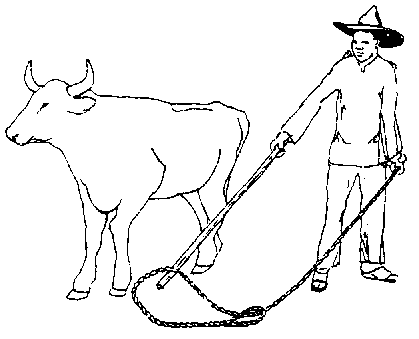 
3) Pull the animal backward to the centerpost of the corral and hold it secure while a second person approaches from the front and slips a rope around its horns. Avoid using a post which is part of the fence; animals are often injured when they kick out and catch a foot between the rails.

1) Put a sturdy post inside a corral. The post should be chest-high, smooth, and very firmly set. It should be 21/2 to 3 meters from the fence. Refer to this post as the "centerpost".

Hang the upper-left-hand portion of the loop over the peg. The rest of the loop should be on the ground.

4) Stand near the centerpost and hold the shank of the rope with one hand. Have a second person drive the animal around the corral from the right. When the animal's midsection is passing over the loop, raise your arm quickly and without bending the elbow. A properly-timed motion will throw the entire lefthand portion of the loop into the air and across the path of the oncoming hind legs. The noose will close as your arm rises. 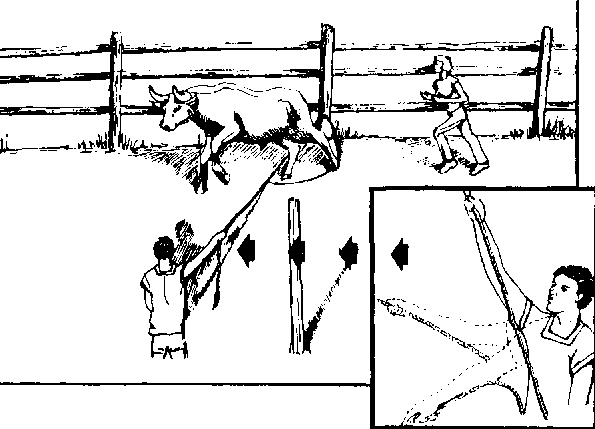 
The technique works because the natural tendency of the animal is to run along the fence. Hanging the rope on the peg makes it easier for the trainer to start the noose

moving in an upward direction-or, to give it "lift".


5) Draw the animal back until you are in a position to wind the rope once around the post. Then get behind the post and continue to draw the animal in until its leg is snug against the wood.

6) With the animal secured by this first rope, someone can safely approach from the front and slip a second rope over its horns.

If the animal has been caught by a foreleg, it will be necessary to attach ropes to both the horns and a hind leg.

Sometimes an animal must be immobilized completely before it can be treated or harnessed. This is done by casting it-pulling it to the ground and tying its legs. To do this, tighten a noose around its horns. Bring the free rope back to the withers and cinch it loosely around the animal's girth. Then pass the rope back and cinch it again around the loins. Pulling the free end exerts pressure on the loin area, and the animal sinks down. 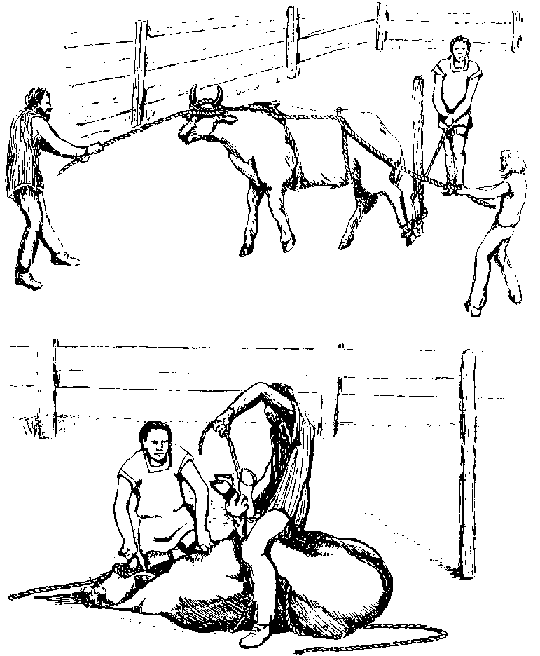 
Once the animal is down, the rear legs can be bound with rope at the fetlocks. To further immobilize the animal, one person can hold its head, while another puts his or her knee on the animal's front shoulder.