N'Dama. This breed of cattle originated in Guinea but is found in Senegal, Mali, the Ivory Coast, Ghana, Nigeria, and the Central African Republic. Translated, the name means "small cattle". The animal has square, compact features that are highly desirable in a draft animal. The following characteristics are typical of the breed: short, broad head; lyre-shaped horns; short legs; small dewlap; broad back; undefined withers. Coat is short and usually fawn colored (also can be white, yellowish, black, brown or red). Animals are 95120 cm high at the withers (ground to withers); males weigh 300-400 kg, females 230-350 kg. Approximately 45-55% of the carcass is usable meat.

The breed is small and in some tests, animals did not work efficiently for more than three or four hours per day. It is, however, resistant to trypanosomiasis and therefore a practical animal in wetter, coastal zones where the disease is prevalent. (In these respects, it is similar to the Lagunae breed of Togo and Benin.) Excellent draft animals are produced when N'Dama and Zebu breeds are crossed. (See illustration page 26.)

White Peul Zebu. This breed is one of a group of breeds herded by the nomadic Peul or Fulani people of West Africa. The animals are usually white with black eyes, ears, muzzles, tail switches, hoofs and horn tips. Faces are squarish with flat foreheads and eye sockets flush (as opposed to protruding). They are long-legged, long-necked and heavy. Bulls average 550 kg, 135 cm high at the withers; cows, 350 kg and 125 cm.

The large hump makes the animal suitable for work in a yoke; however, the overall high carriage elevates the line of draft and makes pulling more difficult. The animals work slowly, sustain an effort for five to six hours per day, and can exert great force when momentary resistance must be overcome. They are noted for their even temper. 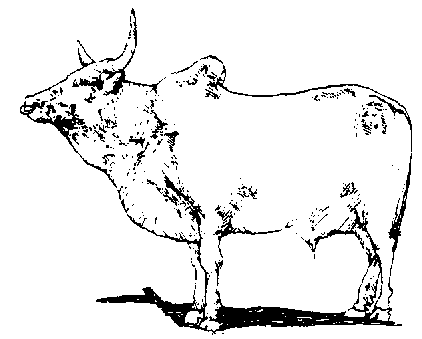 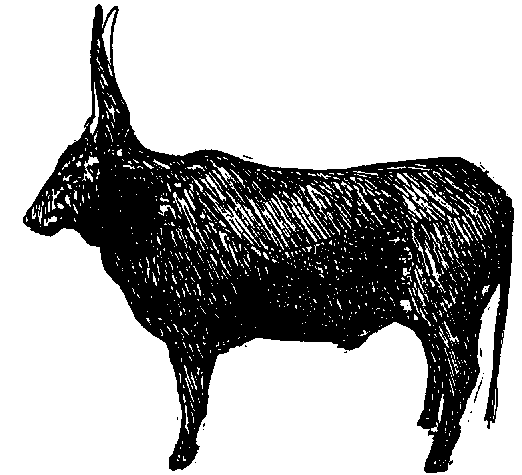 
Bahima Zebu. This breed is of the Ankole cattle group of central Africa. Like the White Peul Zebu, it is a large animal with a long body and long legs. At two and a half years (work age), it may weigh as much as 300 kg, later attaining a weight of 500 kg and a height of 145 cm. Adult cows weigh 350 kg and are 120 cm high at the withers. Horns are long, high and graceful; common color is deep red.

A more practical draft animal within the Ankole group is the Bashi Zebu of Zaire. It is a smaller breed, with bulls averaging 300 kg and cows 250 kg. It can work five hours per day in hard dry soil (plow). A cross between the Bashi and the Bukedi-a short-horned East African Zebu-gives a very muscular, medium-sized animal excellent for draft (Nganda).

Female Masai ass (Kenya, Tanzania, Malawi). The average adult is 100 cm high at the withers, 110 cm long, and has a girth of 115 cm (circumference). Note the well-fleshed rear quarters and flank, the muscular shoulder, and straight, well-set legs. However, the slightly swayed back is typical of older animals and mares in foal (carrying young). Note the attentive face and overall strong appearance of the animal.

Female Libyan ass. The animal has a number of readily visible conformation faults: a roach back (rather than being perfectly straight), forelegs too far under (compare to the animal above, whose legs are straighter and whose hoofs are in line with the shoulder). Note the square, wellproportioned head and thick neck. The shoulder stripe is typical of the breed and is common in the wild breeds from which the animal descends.

West African ass, showing qualities of the Minianka breed of southern Mali. Note the overall small, delicate appearance of the animal, the shoulder stripe, the white underside and leg markings, the high croup, the size of the head in proportion to the body. The thick-set, full-looking torso and shoulder are also typical of the breed. However, the poor angulation of the hoof to the pastern relate to the individual animal. Such problems are generally caused by a combination of genetic weakness (individual), poor nutrition, and exposure to improper work conditions (poorly balanced loads, overwork).

(The sketches are based on actual subjects; discussion includes comments on individual conformation.)


Sahel ass. This is a large, heavyset animal well suited for draft. The breed is typically grey, 105-115 cm high at the withers, and has a large, long head and face. Shoulder stripe is usually present. The back is long and straight, the croup fairly short (as with most African breeds), the heart and barrel girths deep, the neck full and strong. The individual pictured shows all of these qualities with one exception: the back is swayed, possible the result of heavy cart work.

Gourma ass. Note the overall thickness of the individual shown. The back is straight, the flanks full, the girth deep, and the legs heavy-set with ample bone and stronglooking joints. The front hoofs need trimming, as indicated by the long toe and short heel. The animal has good conformation from the standpoint of draft efficiency as well as breed. Average height of the breed is 105-110 cm; color is grey to whitish; distribution ranges throughout the Sahel area with high concentrations near the Niger River bend. 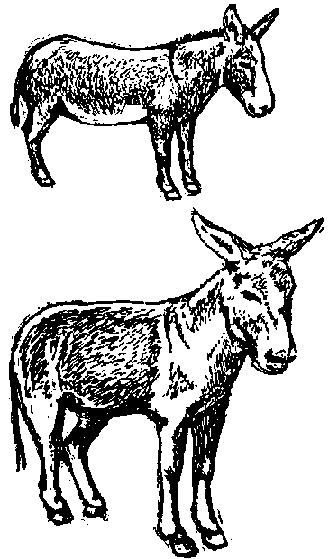