The program consists of four phases. During the first two phases, the animals are taught to obey voice commands individually. In the last two, the individuals are yoked as a team, redrilled on all voice commands, and then made to pull a log (skidding).

Cattle can be difficult to control during the first few days of training, so the first step is to break them of their independence. This is done by using a running-W harness. This is a mechanical teaching aid which lets the trainer stop the animal instantly by making it trip and fall. The purpose of the drill is to make the animal recognize the strength and authority of the trainer, and pay attention to his/her voice.

a) Make, or have local craftsmen make, the parts of the harness:

surcingle-an adjustable belt, approximately 3 meters long, which circles the animal's torso. It has a ring or fixed loop on each side called a side ring, and one underneath called a chest ring.

anklet-an adjustable bracelet which fits around the foot just above the hoof. It has one ring or fixed loop.

All parts can be made of rope, but leather straps fitted with metal rings are easier to use and less likely to cause sores or burns. The surcingle later is used to help support the lines (reins), and so it is recommended that one be made for each animal.

b) Chose soft terrain for breaking, preferably a sandy corral. 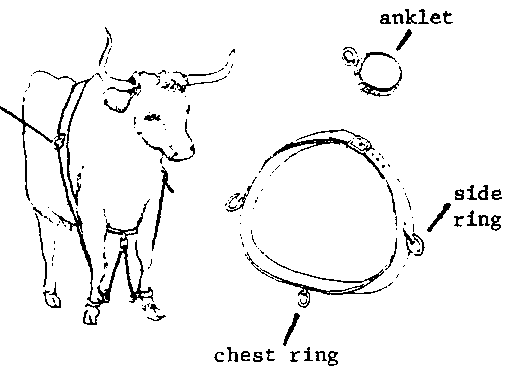 c) Place the harness. First, immobilize the animal and buckle or tie the surcingle around its torso just behind the front legs. Make it snug. Then buckle on the anklets.

The free end should be long enough to let the trainer stand several meters behind the animal's rear quarters.

d) Stand behind the rear quarters holding the free end of the rope. The rope is called a "trip rope". Have an assistant remove all other ropes.

Make the animal walk forward. Urge the bull forward by raising your free arm and stepping toward the tail. At the same time, tell it to walk. Use a clear, controlled voice. If necessary, tap the bull with a stick. Try to avoid making it bolt or run. The goal is to make it walk ahead of you at a fixed distance.

e) Stop. When the animal is moving, give the command to stop two or three times and then pull the trip rope so the front legs buckle and the bull drops to its knees. Keep tension on the rope so the animal can't get up right away. Then give the command for walk, releasing the tension and walking toward the tail. Use voice and body position to get the bull up and moving, tapping it with a stick if necessary.

f) Repeat the process of making it walk and stop five or six times. The purpose of the drill is to:

• teach the animal to pay attention to the trainer; listen.

• show it the trainer is stronger and not afraid.

• begin to teach it that the command stop is related to the action stop.

g) Evaluate progress. Most animals learn to obey the commands walk and stop after two or three days. Breaking sessions are kept short-30-45 minutes in the morning, and again in the afternoon. Harness is left on between sessions so the animal gets used to it, but the surcingle is loosened.

While it may seem that an animal has learned to obey the commands during a given session, be sure to check its memory: begin each new lesson with a review of the old. Some animals may not learn so quickly. Be patient and persistent. If an animal doesn't respond after five or six days, try putting it in a yoke with a trained animal and repeat the drills; use the W-harness on the untrained animal. When the session is over, turn the pair loose in a corral with the yoke still on. Later, repeat drills. Some animals have physical or behavioral problems that make them aggressive or extremely stubborn and unmanageable. Castration may help if the animal is still under 18 months of age. The safest and easiest solution is to find a replacement animal.

This is the process of controlling an animal's movements from behind using voice commands and lines. Lines are long reins attached to the animal's halter (or nosering).

b) If the animal isn't wearing a halter or nosering, make a halter and put it on (see page 35).

c) Attach lines from either side of the halter or nosering and run them through the side rings of the surcingle. They should be long enough to reach a driver standing several meters behind the animal. The driver holds a line in each hand.

d) Have an assistant control the trip rope. Continue to use the trip rope as a teaching aid/ safety device throughout training. Once the trainer can manage the lines with one hand, he/she can take the trip rope in the other. 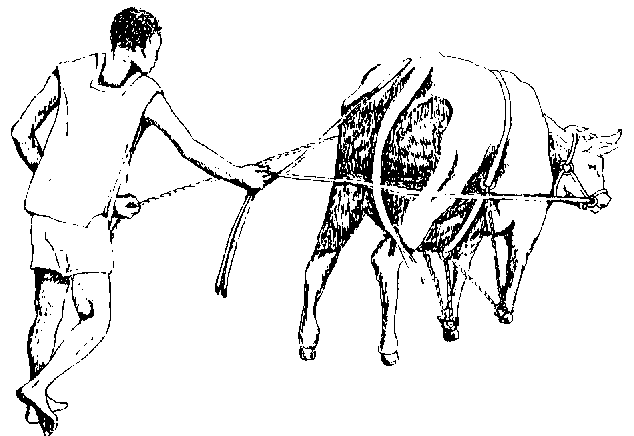 
These steps are for ground driving horses, but they do not differ when applied to cattle. The leverage offered through a halter or nosering is sufficient to turn a bull's head; a bridle and bit is not needed.

Important Note: During this stage of training, each command is preceded by the animal's name. Later, when in a team, it can be singled out and made to respond.

Before the team is yoked, the trainer must decide which animal belongs on the right-hand side. This is the animal which walks in the furrow during plowing. The taller of the pair is usually put in the furrow, as this makes the yoke ride parallel to the uncut ground and square to each animal's neck. The team pulls more evenly, and is less likely to develop sores or yoke galls. When speaking about pairs of animals, it is customary to refer to the right-hand animal as the "off" animal and the left-hand one as the "near" animal.

a) Tie the animals to a rail, side by side. They should be wearing W-harness and halters (or noserings). The lines should not yet be attached.

b) Place the yoke. Stand on one side holding the yoke. Pass one end over the team's back to an assistant on the opposite side. If the team shies or refuses, try passing it from the other side. Shying is often caused by imperfect vision or the sudden appearance of a strange object near the head. 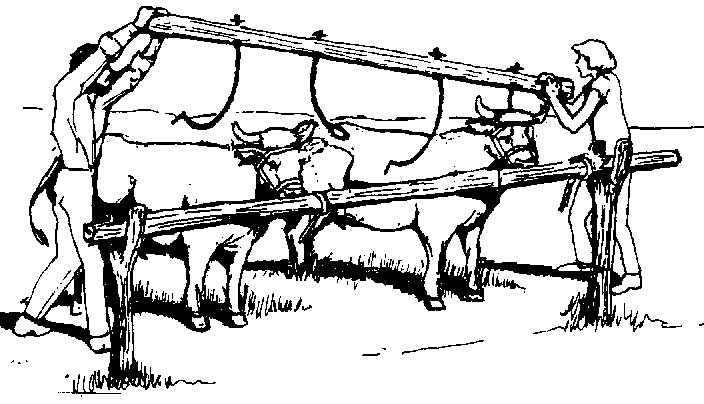 
c) Adjust the bows by sliding them up or down in the yoke stock so they rest against the animals' chests without touching the base of the neck (windpipe).

Note: The best yoke for training purposes is the kind shown below. Each bow is made of two J-shaped bars which can be turned so they lock and unlock under the animal's neck. If the team falls, or gets the yoke caught, the bows are unlocked and the yoke lifted off. A single piece bow can be extremely difficult to remove in these situations; the danger of strangulation is great.

When single piece bows are used: First lay the stock across the animals' necks, then slip the bows up and into the stock from underneath.

d) Place the lines. (Use the system illustrated on page _, and see page _, lead pair.)

e) Drive the team from behind, drilling it on the commands walk, stop, right, and left.

f) Teach the animals to distinguish between individual and general commands.

Slow one animal down by pulling its lines. Then get it to speed up by calling its name and giving the command for walk in a sharp voice.

Example: "Walk" means both animals walk; the team moves forward or speeds up. It is a general command. "Red! Walk!" means you want Red to pick up his pace so he is walking even with the other. He was lagging behind.

g) Teach the team to back up. The command is given and the driver pulls back on the lines evenly. At the same time, an assistant standing in front of the team urges it back by tapping the animals' knees with a stick and raising his hand so they shy. Pushing against the yoke helps if they don't shy back. Pulling the yoke with a chain also helps. 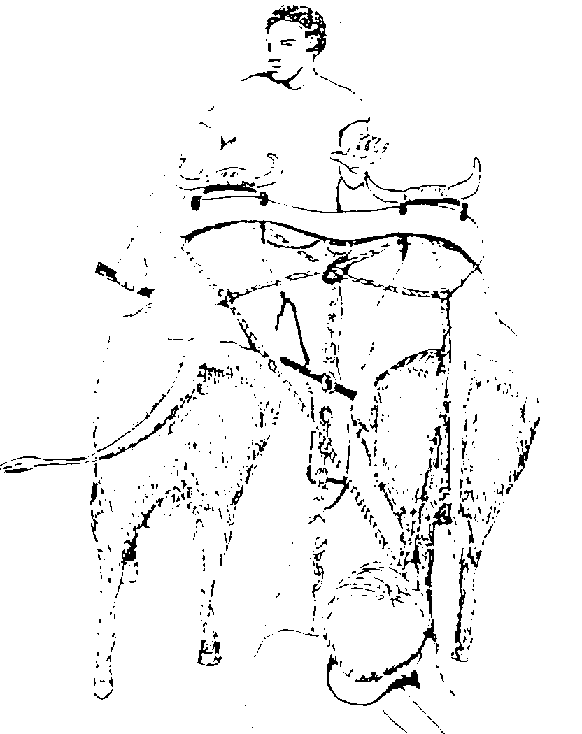 
Breaking the Team to Pull (Skidding)

a) Yoke the team. Use lines and trip ropes.

b) Skid a log. Wrap a chain around the butt (broadest) end of a log. Extend the chain so it forms a straight line with the log. The chain should be 3-4 meters long and have a hook on the end. The log should be very light and easy to drag. Drive the team over the log and toward an assistant who stands at the end of the chain. Have the assistant hook the chain to the clevis which is at the midpoint of the yoke stock. An alternative method is to attach the chain to the clevis and let the team drag it so the free end is close to the end of the log. If this method is used, be sure the team is used to dragging the chain.

Drive the team, practicing all commands. Have the assistant control one or both of the trip ropes. Rest the team for a minute or so after every 5-10 minutes of work. Don't let them get out of breath or overheated. Make sure the yoke doesn't cause bruises or sores.

c) Increase the size of the load. Attach a short rope to the back of the log and when practicing turns, bring it around as though it were a plow or cultivator. Pull the log back as you would if the plow snagged on a root.

d) Hitch your team to a field implement or load or repeat drills.

A Note on Breaking Cattle to Collar Harness:

Animals that have pulled in yokes usually will pull in a collar with very little additional training. The section on training horses in collars will be helpful to those who are training cattle in collars. However, it is important to break cattle with a running-W harness first.