The program consists of six phases. On the average, it will take 3-4 weeks of training before the animal is able to pull a cart or field implement.

Note: In the United States, it is standard procedure to approach, lead, harness, mount, and dismount from the animal's left side (sometimes called the "near" side). In countries where a right-hand standard is used, proceed from the right, reversing hand positions described below.

a) Place a halter on the animal. Fasten a one-meter rope to the chin ring of the halter. This is called a lead rose or lead shank.

b) Stand on the left side of the animal close to its head. Hold the excess rope in the left hand. You are facing forward. The command given is the animal's name and the word "stand". Use a firm, unexcited voice.

c) Walk forward, pulling with your right hand and giving the command for walk. If the animal won't move, you can get it started by pulling its head toward you. This throws it off balance and forces it to take a step (be careful not to let it step on you). Keep pulling the animal around you in a tight circle, forcing it to take successive steps. Gradually straighten out the line of movement. Don't look at the animal: look forward.

If the animal refuses to lead:

• Have a second person encourage it from behind by tapping it with a stick or whip. The voice command, however, comes from the trainer-the person leading it. Use whips sparingly.

• Practice next to an animal that already is trained. When breaking a colt, walk it next to its mother.

If two assistants are available, have them stand behind the animal and hold opposite ends of a 2-meter rope or strap. When you give the command for walk, have them move up and push the animal forward with the rope.

d) Teach the animal to stop by pulling the lead rope back and down so pressure is exerted on the front of the noseband. Give the command and pull back without turning and looking at the animal. For extra leverage, lock your right elbow into its chest as you tug back on the halter.

e) Practice turns. Walking on the left, the trainer uses the lead rope to turn the head. 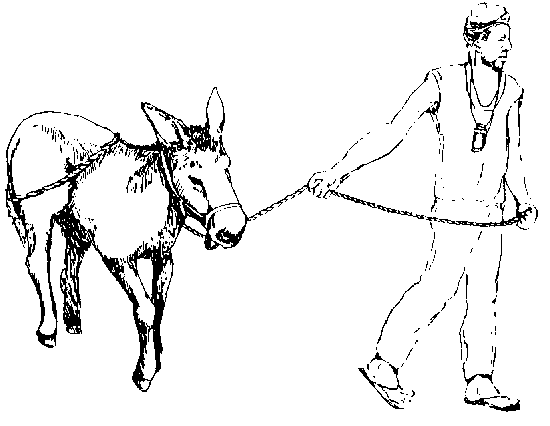 For a left turn, pull the rope toward you and begin to circle leftward as you give the command. The pull is perpendicular to the head-not up or down. The animal feels pressure from the right side of the halter. For a right turn, walk as close to the animal as you can and then begin to extend your arm under the chin and then out to the right. The animal feels pressure from the left side of the halter.

f) To back up, stand in the usual position, but face the rear of the animal. Hold the lead rope in the left hand and push back and up gently while giving the command.

g) During the first few sessions, use the same area for training, avoiding potential distractions. Later, lead the animal to other areas. See if it will lead into a stall, stream, woods, over a bridge. How does it behave around other animals and people?

Breaking to a halter may take 1-2 weeks of two one-and-a-half-hour sessions each day. Be patient and persistent. Do not be discouraged if the animal refuses to lead, or fails to recognize commands as quickly as you think it should. Never abuse it. Try to outsmart it: show it you can make it do what you want without hurting it.

It is extremely important to reward correct behavior. This is done with a pat on the neck and a word of praise. Do not reward with food.

Once an animal begins to associate voice commands with the movements expected by the trainer, the lead rope is extended and commands are given while the animal circles the trainer. This process is called lunging. Its purpose is to get the animal to listen and obey from a greater distance. This phase should take only 3-4 days.

a) Attach a 5-meter rope to the halter. This is the "lunge line".

b) Stand one or two meters back from the animal holding the line in the left hand and a long switch or whip in the right.

c) Have the animal circle you to the left, obeying the commands for walk, stop, and stand. Use the switch to drive the animal forward as needed.

If it refuses to move forward, have an assistant stand behind it and use the switch. If it moves in toward you, force it to keep its distance by having the assistant walk inside the circle between you and it.

d) Reverse the direction and repeat all drills.

e) Gradually extend the lunge line until the animal will respond to commands given at a distance of five meters.

This is the process of getting the animal used to the harness it will wear when pulling a cart, plow, or other field implement. Basically, it involves repeating lunging drills while the animal is wearing its harness. Do not try to put the harness on all at once. This can frighten it, or distract it so much that it won't listen to you. A good approach is to lunge it first with its bridle, then with bridle and surcingle, then bridle, collar and surcingle, and finally in full harness. This should take 2-3 days.

Note: Description of the actual harnessing procedure is found on page 86, How to Harness a Horse, Donkey or Mule. 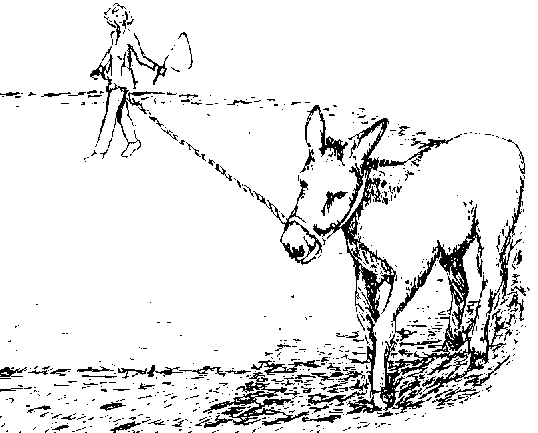 the driver or plow operator will be when actual work is done.

a) Put the harness on, making these checks:

Traces should be fastened to the britching so they do not drag on the ground.

Lines go from their starting point on the bit, pass through rings on both the hames and the jack saddle, and then back to the driver.

b) Stand approximately two meters behind the animal holding the lines. Keep your hands high, about level with the animal's mouth. Keep them shoulder width (your shoulders). Try to establish enough tension on the lines so you can feel the bit without actually pulling the animal back toward you. The tension on the lines makes the animal pay attention. It should be alert to your control even though you are not moving.

c) Release the tension slightly, and give the animal's name and the command for walk. If it doesn't move, snap one line so it slaps the top of rear quarters. Repeat the command using a louder voice.

d) Practice turns by using the lines to pull the head right or left. Remember that if you pull one line, you must slacken the other.

To turn right, draw your right arm back and to the outside of your shoulder without jerking or changing the height of the line. At the same time, extend your left arm straight forward so there is no tension on the left side of the animal's mouth.

Reverse the procedure for a left turn.

e) make the animal back up. Begin in the position described in step b. Give the animal's name and the command "back" while pulling back with both lines. Don't change the height of your hands. Pull gently, but firmly. Use a low voice and draw out the word so it lasts for several seconds at a time.

Skidding is the process of dragging logs or fallen trees using animal power. It is used primarily during logging or field-clearing operations, but it is extremely useful as a training procedure for draft animals. Teaching an animal to skid should take 2-3 days.

a) Put the harness on the animal and unhook the left trace from the britching ring.

b) Hook the trace to one end of a swingtree or "tree".

c) Stand behind the animal and ground drive it, making a very large circle to the left. This lets the animal get used to the noise and vibration without having the trace rub against its flank.

d) Hook both traces to the tree and ground drive the animal. Tie a safety rope to the middle of the tree so if the animal spooks and runs, you can run with it and keep the tree from hitting the back legs. Hold the lines in your right hand, the safety rope in your left.

Add resistance by having an assistant pull back on the safety rope. The tree is now off the ground, as it would be when attached to a cart or implement. The assistant stands directly behind the animal, the driver slightly to his right.

f) Drill on all commands (except back)

When individual animals are well trained, they are harnessed as a team, ground-driven, skidded, and finally hitched to a cart or implement. The commands practiced in each stage are stand, walk, stop, turns, and backing up. Training the team, the last phase, should take one week.