Few animals are so well trained that they turn and stop when the driver gives a voice command. Turns, partial turns, stops and changes in speed are accomplished by a combination of voice commands and signals made through the lines. Lines are long ropes or leather straps that reach from the driver to the animal's head. The lines attach to the sides of a bridle, halter, or nosering, all gear designed to transfer pressure from the lines to the sides of the nose or mouth.

Lines have two functions: they help the driver regulate the degree of turning and the amount of speed, and they act as a safety control in cases where an animal spooks or refuses to obey. It is important to arrange lines so they perform both functions.

Some farmers avoid using lines by having an assistant lead the animal or team from the front. This is not a bad practice if extra labor is available, and if the animal is never to be used to pull a cart or wagon. It is dangerous to drive a vehicle using animals unaccustomed to lines, or using a steering/stopping system that provides little or no leverage.

Halter and lines (for cattle, or easily controlled horses, donkeys or mules). The driver controls the speed and direction of the animal by pulling lines attached to side rings of the halter.

A right hand turn is made by pulling the right line out and to the side. The line of pull should be level and at the same height as the point of leverage (the side ring of the halter). The movement tightens the halter against the left side of the animal's head and begins to bring the nose around to the right. You must slacken the left line as you pull back to the right.

A left turn is made by doing the reverse. A stop is made by pulling both lines at once, drawing the muzzle into the chest. A hard snap of the lines will usually stop an animal that won't respond to even pressure. If the halter is made of rope, pad the noseband with cloth so it doesn't rub the nose and cause burns or sores.

It is a good practice to support the lines by running them through rings on the hames, surcingle, or backpad. This takes the weight of the lines off the nose and encourages the animal to carry its head normally. It also keeps the lines from slackening and getting underfoot during turns or rest periods.

Bridle and lines (for horses, donkeys and mules). This is the same system as halter/ lines but instead of attaching to the siderings of the halter, the lines attach to the bit rings of the bridle.

Some bridles are bitless and work by exerting pressures on the nose like a halter.

Noserings (cattle only). Both lines attach to the ring and then split back to the sides and to the driver. Use a surcingle with siderings to support the lines as they pass back.

Team lines with coupling. A long line called a team line is fastened to the outside of each animal's headgear (bridle, halter, or nosering). The insides of the headgear are then linked together with a short piece of rope or chain. This is called a coupling. 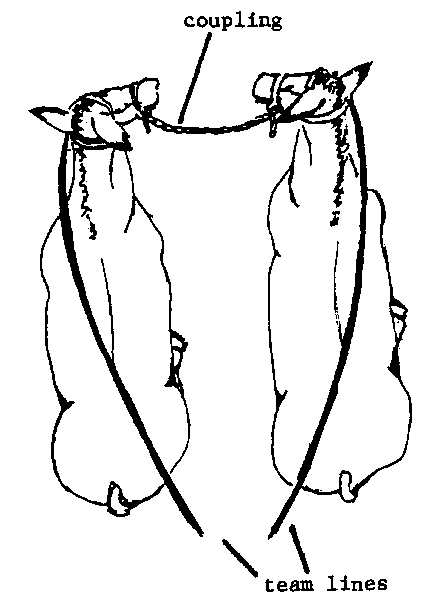 When the driver pulls the left team line, the left animal turns to the outside (left). As it turns, the coupling tightens and pulls the righthand animal to the left. A right turn is accomplished by the opposite process.

This system works well with animals in a yoke, or welltrained animals in harness. It is not recommended for cart or wagon work because the driver has no leverage for stopping.

Team lines without coupling. When a team is working in a weeding yoke, the distance between the animals is so great that the driver may want to attach team lines to the insides of the headgear. This gives him/her shorter, lighter lines to work with.

To make a right turn, the driver pulls the left line. This pulls the left animal's head to the inside (right). As it turns, it puts sideward pressure on its bow and the whole yoke is pushed to the right. This signals the righthand animal to turn right. 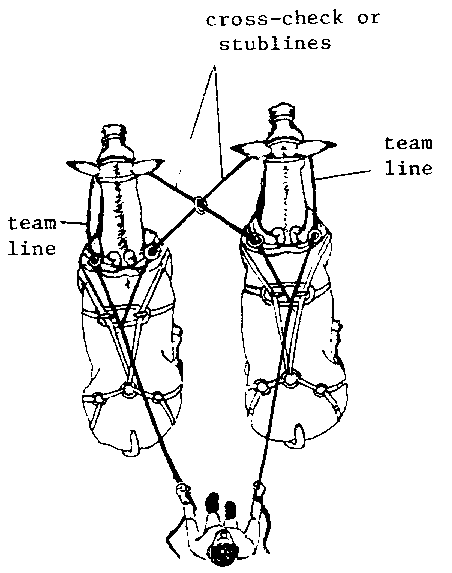 
Team lines with cross-check. A complete steering system lets the driver turn both animals-not just one. Each outside line (see above) is equipped with a second, shorter line that branches off and crosses over to the headgear of the other animal. When the driver pulls the left line, for example, he/she is pulling the end of a Y-shaped line that connects to the left side of each animal's headgear.

Cross-checks are supported as they cross over. If the team is in a yoke, the yoke stock can serve as a support. If the team is in collar harness, the lines go through rings on or attached to the inside hames of the opposite animal.

It is important that the crosschecks are the same length and connect to the team lines equal distances back from the headgear. They must also connect at the right distance,