Soil loss by wind erosion is most common in drier areas but also can occur in wetter regions during dry weather ( wet soils don't blow). It's one of the main factors behind the environmental degradation of regions such as the African Sahel where it's both a cause and effect of desertification and deforestation. It robs the land of its best soil (topsoil) and kills crops and vegetation by abrasion, uprooting, or burial. Irrigation canals and even highways can be buried by windblown soil and sand. Land affected by drought, overcultivation, overgrazing, or wet season rainfall erosion becomes especially susceptible to wind erosion.

THE MECHANICS OF WIND EROSION

Wind erosion occurs when poorly covered soil is exposed to winds higher than about 20 km/hr (12 mph). Movement of susceptible soil is proportional to the wind speed cubed, so it increases rapidly above the threshold wind level (i.e. 8 times more soil is moved at 40 km/hr than at 20 km/hr). Soil particles of 0.1 mm diameter (fine sand) seem to be the most easily moved than either larger (coarser sand) or smaller ones (silt, clay). Soil movement begins when wind abrasion begins to detach tiny soil particles. Once laden with these, the wind's abrasive action markedly increases and dislodges more particles. About 50-75 percent of movement occurs as short bounces along the surface; when larger particles are struck by this bouncing, they can begin rolling and sliding, a process called "soil creep" which can account for 5-25 percent of total movement. Finally, tiny particles can be carried thousands of meters upward and be transported hundreds of kilometers.

Several things can be done to help control wind erosion:

• Maintain the soil surface in a moist condition during periods of wind erosion risk. However, this isn't practical on large areas or where water is scarce.

• Soil in a rough, cloddy condition resists movement better than when pulverized or smooth. Maintaining a good level of organic matter helps aggregate (clump) the particles together. When plowing or other tillage is done, the resulting furrows should be at right angles to the prevailing wind.

• Soil coverage with close-sown vegetation, trees, or mulch can be very effective. A related practice is called strip cropping in which strips of close-sown crops alternate with more open ones across the field at right angles to the prevailing wind.

In areas of high wind erosion risk, tree windbreaks (also called shelterbelts) offer the most permanent and effective control where land can't be constantly maintained in pasture or trees. They can be used on a small scale for individual fields or garden projects or, on a broader scale, to protect much larger areas (even villages themselves). (NOTE: Some people use the term "shelterbelt" to refer to these larger scale windbreaks, but there's no agreement on this.) Windbreaks consist of a barrier of one or more rows of fastgrowing trees planted to the windward side of the area in need of protection. In regions where the prevailing wind comes from more than one direction, two or more windbreaks at right angles to each other may be needed. 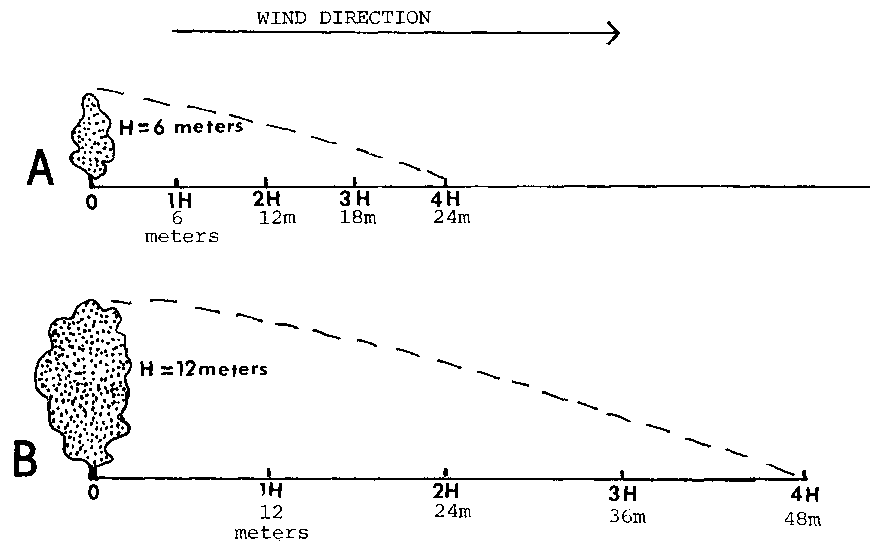 It's not always easy to convince farmers or villagers of the value of shelterbelts. They take 2 or more years to begin being effective and require labor to plant, maintain, and protect in the meantime. However, once established, they not only provide wind erosion protection, but can supply forage for animals (leaves, pods), and wood for fuel and fencing when pruned; some like jujube (Zyziphus mauritiana) also provide edible fruit. Dry season vegetable gardens in regions such as the Sahel greatly benefit from windbreaks; they not only lessen wind and sand damage, but lower plant water use rates by reducing the force of hot, drying winds.

Although attempts to introduce windbreaks have had mixed results, there are some success stories. For example, some 250 km of double-row shelterbelts have been recently established in the Maggia Valley of Niger over a 7 year period. Substantial progress has also been made in the Sine-Saloum area of Senegal. In some cases, relief agencies have made windbreak implementation a necessary prerequisite for assistance in other related areas such as the installation of permanent wells for dry season market gardens.

Successful windbreak establishment is another very location-specific practice. You'll first want to read up on the subject and get assistance from your country's forestry service and other reliable sources. Once aware of the possibilities (and limitations), it's vital to confer with the villagers and farmers involved to sound out their needs and expectations, as well as to make sure they realize the labor, care, and time frame involved.

The following guidelines are meant to give you some basic facts about windbreaks to help you determine their feasibility and lay the ground for further investigation and intelligent discussion with windbreak specialists.

• Choosing Species: Trees selected can be native or introduced, as long as they're known to be adapted to the area's rainfall, temperatures, and soil conditions. Some other disirable features are:

• A dense (not bushy) crown (top portion) is more resistant to wind damage.

• Legume species like Acacia and Parkinsonia have especially nutritious leaves and pods for fodder and also fix nitrogen.

• Evergreen or at least in full foliage during the windy season.

• Multiple uses such as forage, fruit, and wood for fuel and fencing, etc.

• It's often hard to find one adapted species that combines all these features, so two or more are often used together. Here are just a few examples of windbreak tree species adapted to drier tropical regions (scientific names in parentheses):

NOTE: Temporary barriers may be needed between permanent windbreaks during the first 5 years of growth.

• Density: Surprisingly, the best windbreaks are usually moderately dense. Overly dense (impermeable) ones cause a turbulence effect on the downwind side that considerably reduces the zone of downwind protection. Densities of about 60-70 percent have proven the most effective in providing good wind protection with minimum turbulence.

• Width: In practice, windbreak width usually is determined by the amount of land, labor, and water available. One to 3 row windbreaks are the most practical for drier areas. Two rows of Eucalyptus camauldulensis are usually sufficient to form an effective permeable barrier. A species like Conacarpus lancifolius with a compact crown (good distribution of branches from top to bottom) can be effective with just one row. However, such singlerow plantings have no safety factor; if holes develop, wind funneling can cause considerable damage. Multiple-row windbreaks facilitate cutting (for firewood, etc.) and also replanting (needed when growth slows, usually after 15-25 years); these operations can be done one row at a time, leaving at least one row standing.

• Combining Species: To provide an effective vertical distribution of foliage, it may be desirable to combine a low-growing species like Acacia with a tall-growing one like Eucalyptus in a 2-5 row configuration (see Fig. 3-17).

FIGURE 3-17: Examples of multiple-row windbreaks. An effective triangular configuration (A, B) can be obtained by combining different species, placing the tallest in the center. A rectangular configuration (C) results from using multiple rows of the same species; it is also satisfactory, as long as at least one row has foliage down to ground level.

• In-row tree spacing: Overly close spacings may cause crowding that results in dense growth of the top portion but sparse growth below. A final in-row spacing of 1-1.5 meters for shrubs and 2-3 meters for trees is usually best. To provide quicker closure, seedlings can be planted twice as close and then later thinned by removing every other one.

• Seedlings may be available from a forestry station in the area or may need to be grown. Most common species are grown in polythene bags and are ready for setting at 6-9 months. Some like Parkinsonia take only 3 months. Others like Tamarisk articulate can be planted directly from cuttings.

• Good soil preparation of the windbreak planting area is much more important than for normal forest planting in order to encourage a high survival rate and rapid growth.

• Irrigation is needed in dry regions, during the first 2-3 years. When young, light but frequent waterings (about once every 7-10 days) are best; later on, heavier but less frequent ones will encourage deep rooting. It's often advantageous to plant at the start of the rainy season to take advantage of the moisture. Making micro-catchments (shallow depressions) around the seedlings will help concentrate water near them. Mulching will reduce water evaporation but may attract insects or termites.

• Protection from livestock, illegal cutting, weeds, insects, and fire is vital, especially during the first few years of growth.

• Pruning: Depending on the species, pruning of the lower branches may be needed at an early age to promote height growth. During the fourth or fifth years, further pruning may be needed to encourage horizontal growth.

• Most shelterbelts have a life of roughly 15-25 years, after which growth slows down too much. Cutting and replanting will be needed. In a multiple-row windbreak, the first cut is made on the downwind side about halfway through the normal rotation period. The remaining windward rows offer adequate protection while the replanted row becomes established. The second cut (windward side) and others are done at the normal rotation period (15-25 years).

NOTE: For further information on windbreaks, refer to Appendix H.