Whether staked out or corralled, these animals are generally caught using very simple methods. Approached slowly and spoken to softly, or offered a handful of grain, they rarely refuse to be taken by the halter and led. They are easily cornered in a corral and grabbed by the halter, or by the nose and ear; in some cases, a rope may be slipped over the animal's head.

Cross ties are ropes which used to immobilize a horse or donkey in a standing position. To make cross ties, fasten two pieces of rope one meter long to each of two posts or trees which are spaced two meters apart. Fasten the ropes to the halter, one at each side, drawing them tight so the animal cannot move its head. 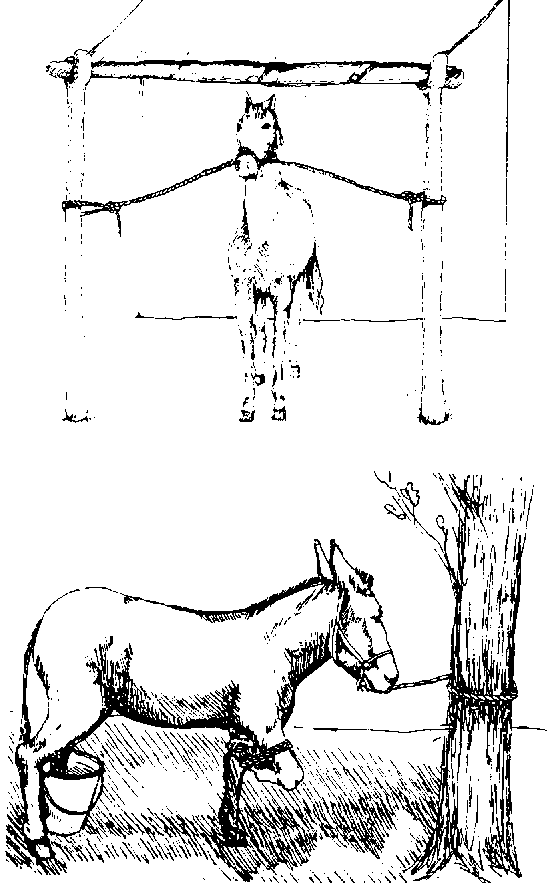 To immobilize the animal, lift one of its legs, squeeze the tendon above the fetlock and pull the leg upward. Thus forced to stand on three legs, the animal cannot move.

If working alone, the trainer can use a belt or rope to hold one of the front feet. The animal will not fall and will remain still while being treated for ticks or wounds. It is especially useful if one of the animal's feet must be kept in a bucket of water.

Casting a horse or donkey by pulling the hind legs out from under it is best accomplished in the following manner:

• Hold the animal in front with cross-ties, or by a strong lead rope or "twitch", which is a loop attached to a short handle.

• To apply the switch, put the loop over the muzzle and twist until very secure.

• Tie a fixed loop in the center of a long rope, and fit the loop around the animal's neck like a collar. The knot rests on the withers and the two ends are parted over the back, one on each side, and brought along the flanks and down between the hind legs. The right-hand rope circles behind the right pastern and is brought forward along the animal's right side. The left-hand rope is used in a similar fashion on the left side. 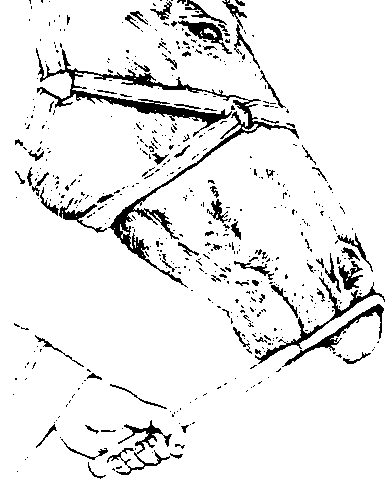 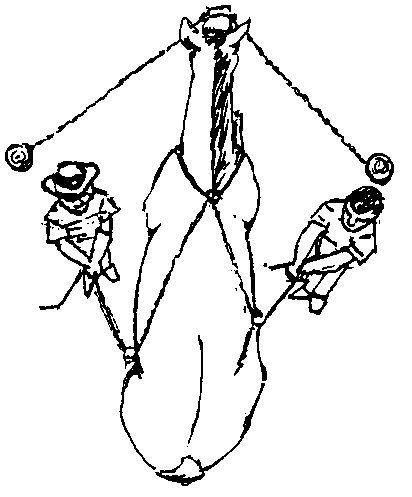 
• People on either side of the animal pull ropes, "walking" the rear legs forward until the animal sinks gently into a sitting position.

Rope burns caused by the casting method can be reduced by running the ropes through anklets attached to the animal's feet. Further advantage can be established by placing a surcingle around the girth of the animal and feeding the ends of the draw-ropes through the support rings.

Once the animal is cast, special care should be taken to ensure that its head is kept low and outstretched; serious neck and back injuries may result when a horse or donkey is allowed to raise its head once it is on its side.

Proper control of the legs will ensure that the animal does not injure itself or the people around it. Immobilize the hind leg by attaching a rope above the pastern, bringing it around the neck and chest and then locking it behind the hock and drawing it up. Control a foreleg by pulling it up into the chest either by hand or with rope. Limbs not drawn up should be bound together at the fetlock with soft rope. In no case should a leg be pinned by having someone sit on it. 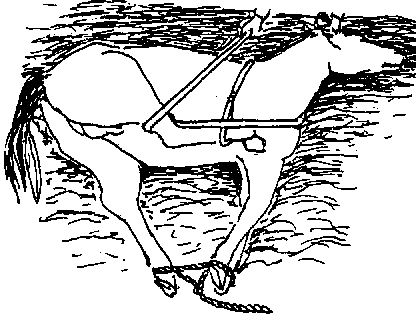