Yokes and harnesses for cattle

The bow yoke is an inexpensive and efficient device for harnessing the power of cattle. When the team pulls, the wooden crosspiece or stock presses back against the muscle and cartilage which forms the front of the animals' withers. This area, very pronounced on some breeds, is called the boss or hump. It provides a natural seat for a yoke.

The yoke is held in place by bows, U-shaped pieces of wood or metal which fit into the stock from underneath. Broad wooden bows provide more surface area than most peg thong or round-iron varieties, and give the animal extra surface to push against with its shoulder. However, there is great advantage in a bow that locks and unlocks under the neck; these bows are easy to remove if a team has fallen and can't or won't get up. To make a yoke:

1) Cut a piece of green (live) wood one meter long. The piece should be thick enough so that once the bark has been peeled off, the pole is 12 cm thick. This pole is called a yoke stock. It should be a variety of wood that will be strong and light and provide a smooth surface for the team to push against.

2) Mark the center of the pole with a piece of charcoal. On either side of this mark make a set of marks. The first mark in the set is 30 cm from the center; the second is 50 cm.

3) Have a carpenter drill a hole though each mark, or have a blacksmith make the holes by burning through the wood with a hot metal point (an awl). The holes must be big enough to let the bows slide in and out freely. They must also be big enough to allow for some shrinkage of the wood. Remember that green wood shrinks as it dries. 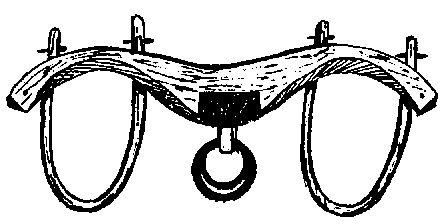 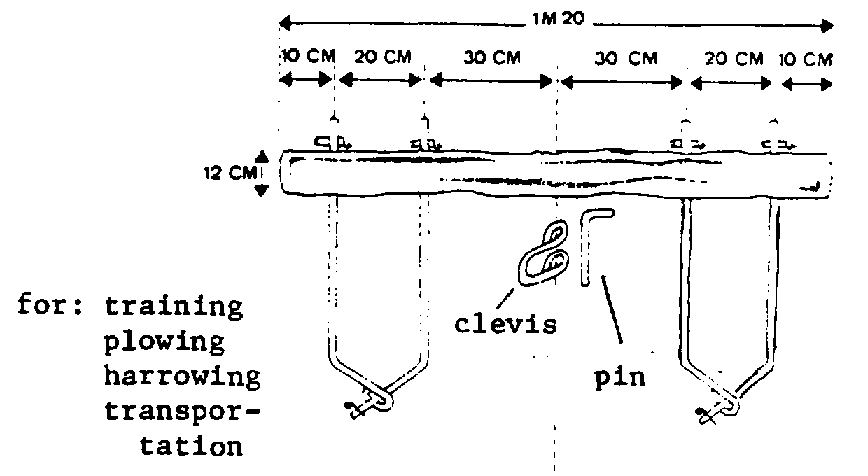 4) Make the bows of round iron 12 mm thick. Have the blacksmith cut four pieces of round iron one meter long and shape them so they fit into the yoke stock as shown in the illustration. The bows lock together so that cotter pins can be passed through to keep the bow from slipping down out of the stock holes. For an explanation of the procedure for putting the yoke on a team, see page 62.

Most head yokes lock behind the horns and are tied to the forehead and horns with straps. The stock is carved out to accommodate the backs of the horns, and so once the yoke is on, the team becomes an extremely tight unit. They are especially useful for cart work because they keep the shaft (tongue of the cart) from driving the stock forward or back during respective backing and braking situations.

Single animal yokes fit either behind or in front of the horns. Lengths of rope, chain or leather (called traces) connect the ends of the yoke to the load. 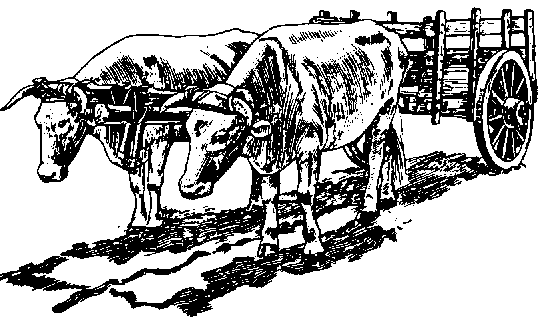 This equipment is for single animals performing light work such as weeding or peanut ridging. Many variations are possible, but all are seated over the hump or withers and connected to the load with traces. Use of a surcingle or neck strap gives stability to the traces and prevents the sling from rocking on the animals' neck. 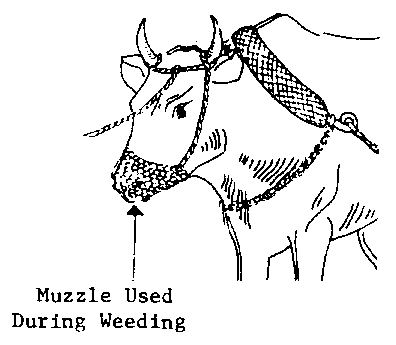 
West Africa-Sling Made of Padded Steel Bar (Round Iron) 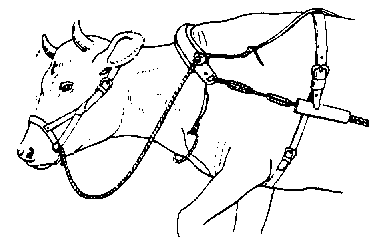 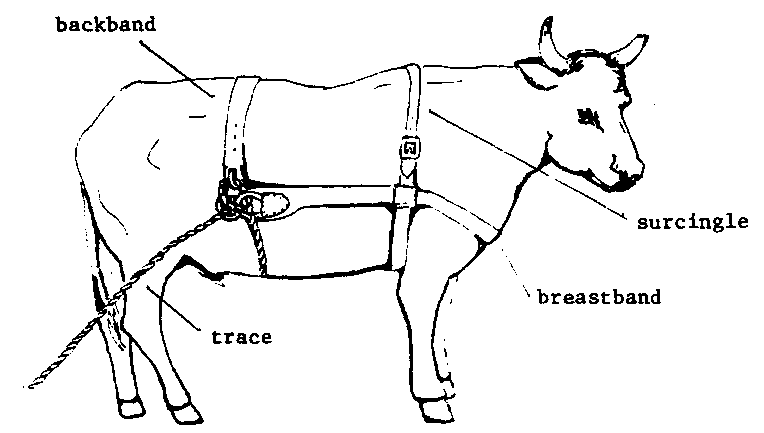 This type of harness is a broad band of leather which circles the animal's chest and sides, and which is supported by a surcingle and backband. The trace is attached where the breastband and backband meet.

The breastband must be high enough on the chest so it does not interfere with movement of the shoulder. Correct position is shown above.

The harness shown was tested on domestic water buffalo in Thailand and shown to be more efficient than commonly-used wooden slings.

Properly fitted, the collar harness provides excellent draft for cattle and buffalo. These animals have relatively narrow chests and the collar must be shaped so it does not interfere with movement of the shoulder. The collars have been used with success in Germany, the United States, and more recently Thailand. 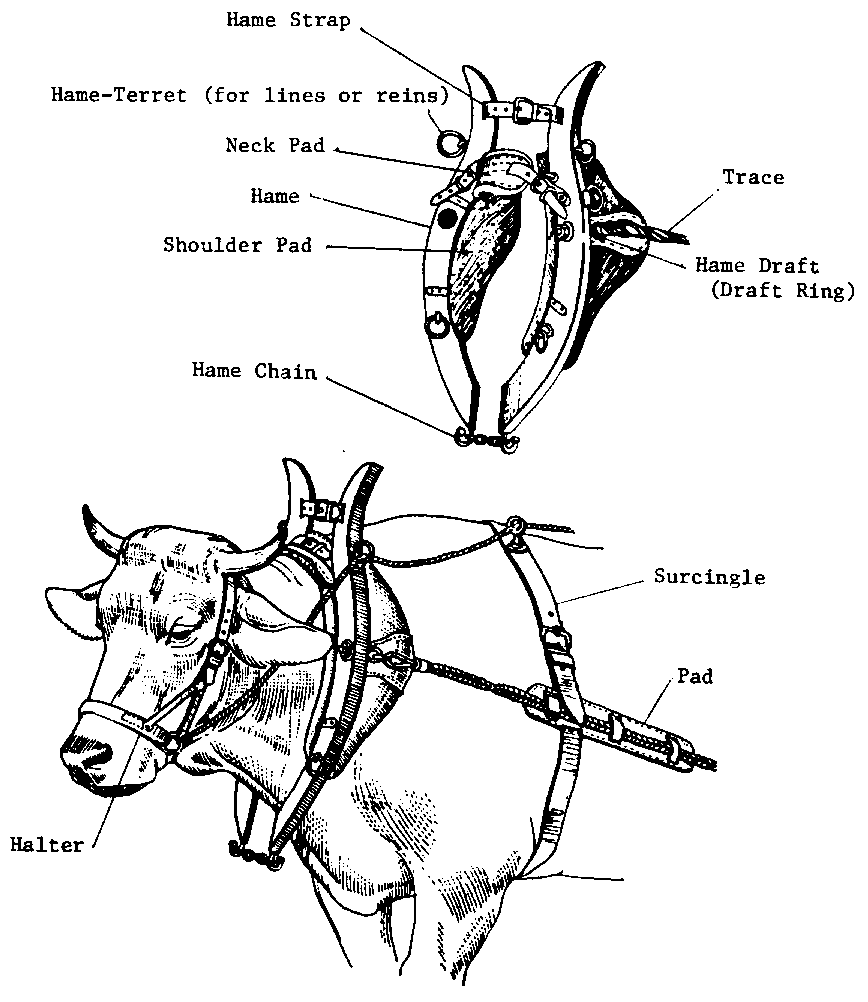 In traction tests performed with domestic buffalo in Thailand, breastband and collar harnesses were shown to be about equal in performance, both types showing a 25 percent increase in draft efficiency over wooden slings. The increase was explained by 1) the greater surface area against which the animal pushes and 2) the increased comfort and related longer working capacity of the animal.