How to harness a horse, donkey or mule

Step 2-Place and secure collar. Stand on the left, next to the animal's head and open the buckle at the top of the collar. Slide the collar up and under the neck and buckle so it fits snugly and back against the shoulders. If you can't slide your hand (flat) between the collar and the neck, loosen it one notch.

Some collars, like the one shown on page 81, have the hames built in. These adjust at the bottom, and so they are put on from above.

Once an animal is used to being harnessed, it is easier and faster to slip the collar over the head without rebuckling. Almost all colars are slightly wider at the bottom and at the top, so hold the collar upside-down and push it over the head. Once it has cleared the brow and ears, turn and seat it.

Step 3-Place the hames, jack saddle and britching (breeching; see page 92 for description). These parts are linked together by interconnecting straps (side straps and traces), and so

and so they are treated as a single unit. 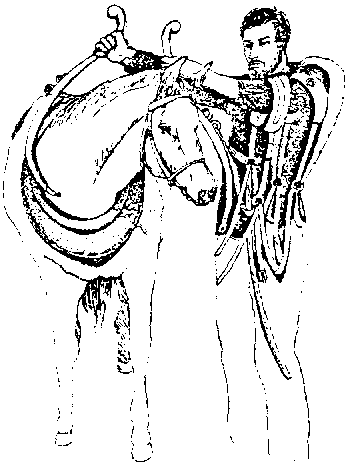 Usually, harness is stored on two pegs. The hames, which are joined at the top by the hame strap, hang on one peg. The jack saddle and britching hang on the other with the britching on the outer end of the peg. This arrangement is used so the harness can be picked up and put on the animal without getting tangled or out of order.

First, put your left arm through the britching and sling both parts (seat and hip strap) up onto your shoulder. Second, bring the Jack saddle onto your forearm and let it hang. Third, pick up the hames, one in each hand. The right hame must be in the right hand.

Holding the harness like this, stand just to the left of the collar and lift the hames high enough so you can get the right hame over the top of the collar. Let both hames down into the grooves in the collar. This is called "seating the hames". Do not buckle them yet.

Next, lay the rest of the harness over the animal 'e back. The jack saddle should be behind the withers, the britching further back. They are not positioned and secured until you go back and buckle the hames.

Buckle the hames at the base of the collar. Then pull the britching over the rear quarters. The britching seat is brought down over the tail as far as it will go, and then the tail is pulled up and over it, and allowed to drop.

Step 4-Place the bridle. The bridle is worn over the halter. The halter is not in the way, and you need it when you remove the bridle, or when you lead or tie the bridled animal.

Put the lines over the head and lay them on the withers or back.

Hold the top of the bridle (cavesson) in your right hand and the bit in your left. Stand to the side of the head and bring your arm over it so your wrist is between the ears and your fingertips on the forehead.

Work the bridle upwards so the noseband circles the muzzle and the bit comes into contact with the teeth. Work the bit into the mouth by massaging the gums with your fingers. If the bit is held as shown, your thumb and middle finger will be in position to do this. 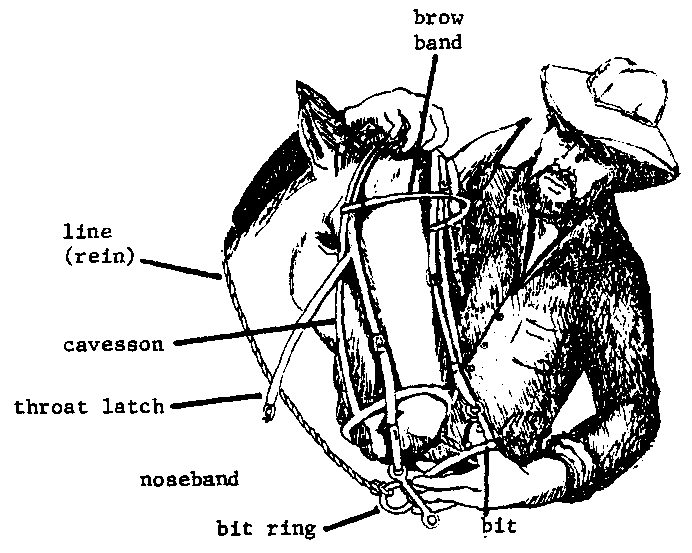 
Once the bit has cleared the front teeth, pull up with your right hand until you are able to work the top of the cavesson over the right ear, and then the left.

Fasten the throat latch, bringing it under the jaw and up to its buckle.

Step 5-Fasten the traces to the singletree (except during harness-breaking because no load will be pulled). The trace (one on either side) hooks to the draft ring on the hame, and runs back to the load. As it passes back, it goes through a supporting sleeve on the jack saddle. When britching is used, the trace passes through an additional support which hangs down from the britching ring. The support is called a trace-holder or lazy strap, and it keeps slack in the trace from getting underfoot when the animal backs up or turns.

Note: Normally traces are left on the harness when it is taken off the animal. When unharnessing, unhook the trace from the load and fasten it to the britching ring.