An animal or team pulling a log (skidding) or a field implement needs only a forward pulling system, because the load can't roll forward and hit it from behind. The digging or dragging action of the load acts like a brake and eliminates the need for breaching. Backing up is usually accomplished by the manual effort of the equipment operator, or, if the equipment is too heavy, wide turns are used to reverse the direction.

This type of hitch is made by connecting a chain from a yoke to a ring or hole on the front of the implement being pulled. The team pushes against the yoke and its power is transferred back to the load through the chain. The chain is called a draw chain. 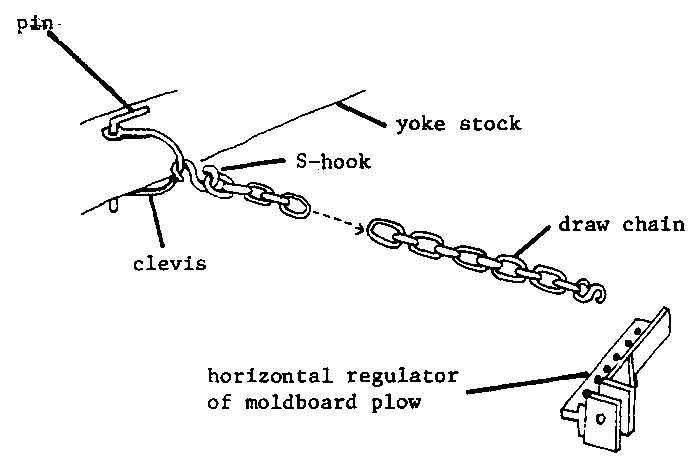 The chain is hooked to a clevis located in the center of the yoke stock. The clevis is held in place by an L-shaped pin which should be easily removable. A three-meter chain is normally used for plowing; if the chain does not have built-in hooks, locally made S-hooks can be used.

Most implements are drawn directly off the buckhead, the front end of the tool-carrying beam. A moldboard plow, however, is offset on a horizontal regulator, a perforated plate that allows the operator to move the line of draft to the right of the beam. The adjustments is discussed on page 125. Sometimes an adjustment must be made on the yoke stock itself. Normally, the stronger animal is placed on the right or "off" side of the chain; during plowing, it walks in the furrow where footing is soft and greater effort is needed. If this animal is very short and the other (left side) tall, the added difference of the furrow-depth will pitch the stock down to the right and may give both animals yoke galls. In this and other instances, the weaker animal should be placed in the furrow. To equalize the pull and ensure that the animals work as a unit, the chain is moved to the left of the yoke center. This will give the weaker animal a longer lever to push against and allow it to step up and maintain the pace of the stronger. The process is called "evening" the pair: the stouter animal is given the short end of the yoke. 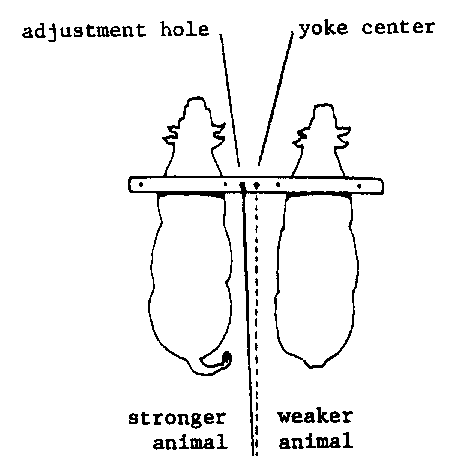 
If the yoke stock is of very strong wood, two holes can be bored, one in the center, one just left of center. When the operator substitutes or replaces one of the animals,

he can adjust the yoke as needed.

Two teams of oxen can be yoked to an implement where heavy soils (argilous, black cotton land, paddy land) are being plowed, or where a heavy harrow, roller, or ridger is being used. (See page 102.)

The weaker pair is used as the front or level team. The stouter pair is put behind; it is called the wheel team. Because the lines are attached to the lead team for steering, cross-checks are used (see page 92). The lines may be attached to halters or noserings, but an alternate horn-to-ear method can be used (see page 107). With a little practice, the driver can learn to snap the lines across the back of a lagging animal. Lines pass through the clevis of the rear (wheel) yoke; this gives them support.

The chain leaves the clevis of the lead yoke, passes under the clevis of the second, passses over a support rope, or strap tied between the backbands of the wheel team (called chain support) and then to the implement. The wheel team is connected to the main draft (chain) with a short piece of chain (extension chain) attached to its clevis. This avoids the problem that results when the lead team is tied into the wheelers' yoke proper (the stock would be yanked forward onto the team's horns whenever the leaders pulled).

The backband traverse is needed to support the lengthy chain.

Singletree to Implement (one animal)

An animal wearing a collar or breastband harness, or a sling or single head yoke, needs a special system to convey its power back to the load. Ropes or chains are attached to sides of the harness or yoke and connected to a bar located behind the animal. The bar is a piece of wood furnished with rings or grooves that hold the ropes. The bar is called a singletree, or swingtree (other names include swingletree, whippletree, tree). The lines that attach to it are called traces. 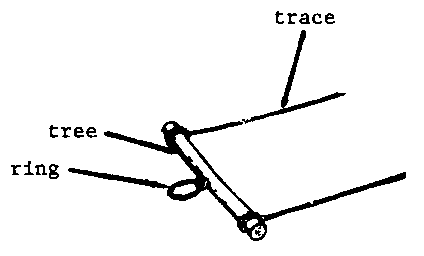 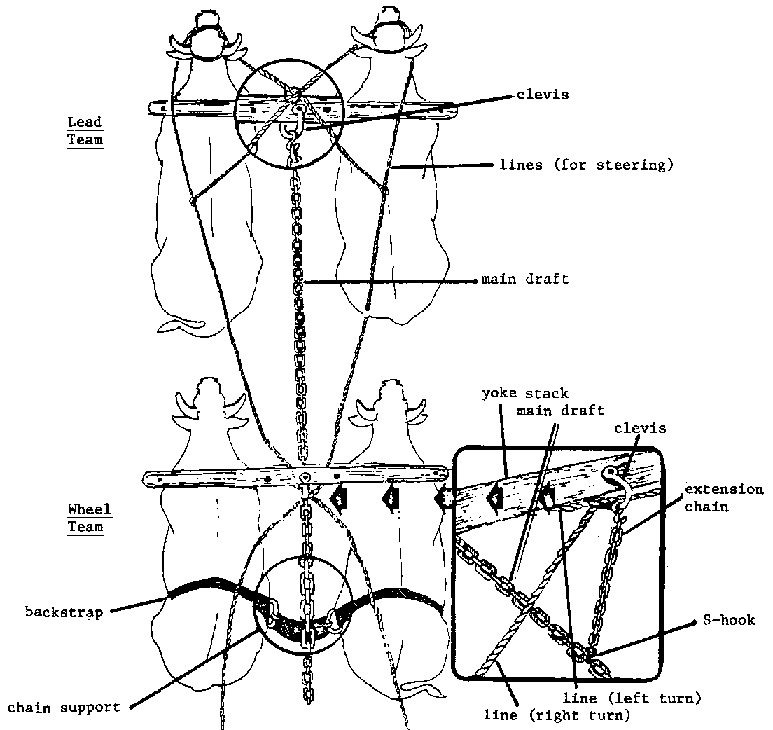 Tandem Yokes to Implement (with magnifications of hitchpoints)


The singletree has a ring in the center which is connected to the load with a hook and short piece of chain. 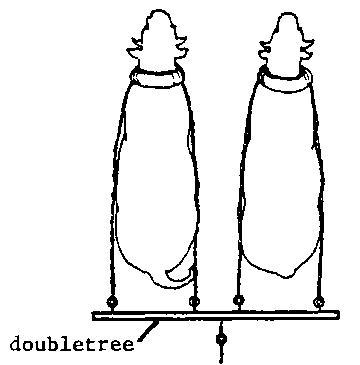 A team in collar or breastband harness can have its traces attached to a longer bar called a doubletree. A short chain connects the doubletree to the load. As with the yoke, advantage can be given to the weaker animal by moving the chain off center and toward the other. 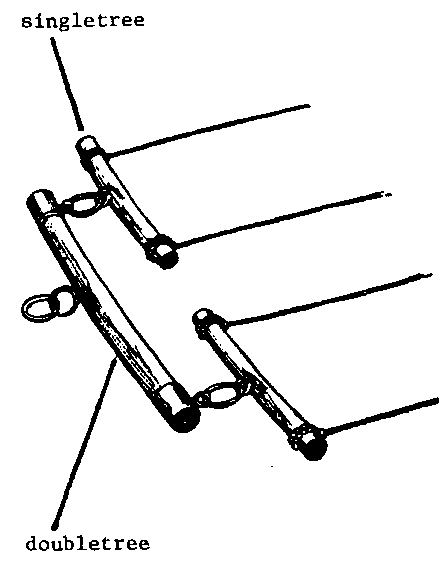 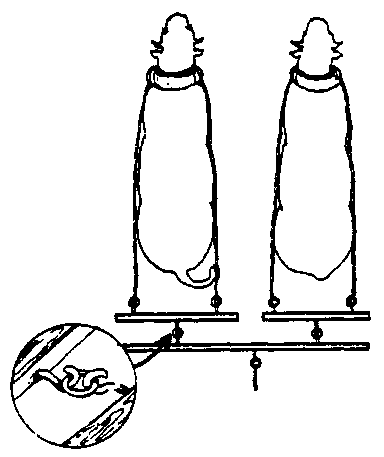 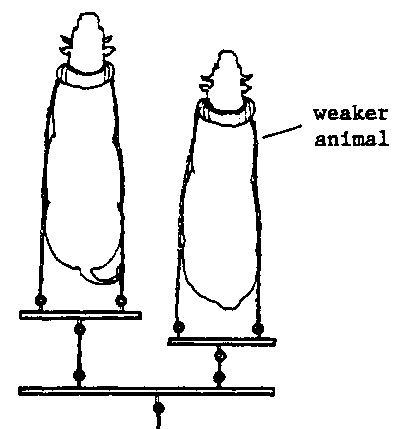 Evening the Pair with a Swingtree Adjustments


Use of singletrees and doubletrees lets the driver make very fine adjustments in the amount of pull delivered by each animal. When one of the animals begins to lag, he shortens its traces or the chain connecting its singletree to the main tree. This lets the animal meet the point of resistance sooner: it no longer has to catch up with the other animal in order to meet the load. An adjustments of a link or two, coupled with some gentle prodding, will "even" the pair and the pull.

Multiple hitches are easy to arrange and can be extremely valuable to farmers owning lighter draft animals. Donkeys or young cattle (two or three years old) can be worked in tandem pairs, three abreast, or in a one-two pattern. Collars or breastbands must be used with equines, but single head or sling yokes can be used for cattle.

In a tandem pair hitch, the leaders are driven with team lines and cross-checks. The wheelers are connected to the leaders with tie-in lines-short ropes which connect their halters to the traces of the leaders. Couplings are used on both teams for additional control. 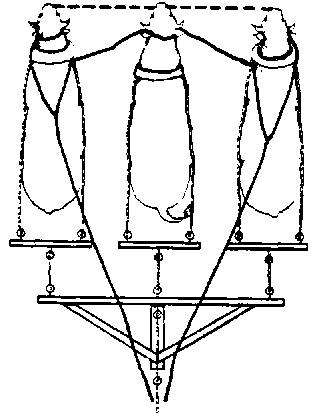 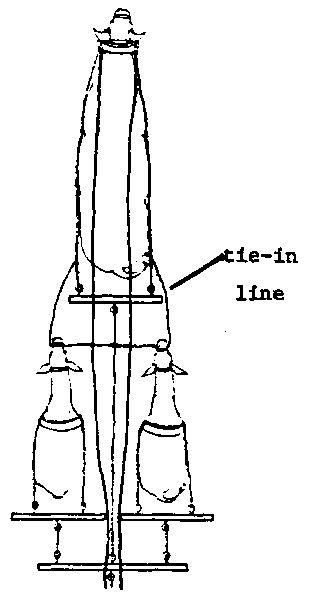 
In a three-abreast hitch, the outside animals are driven with team lines and the middle animal controlled with couplings. Additional steering control can be obtained by adding cross-checks.

In a wedge-shaped hitch the lead animal is driven with lines and wheelers controlled with tie-in lines and a coupling.

Note: If the wheelers walk too fast and tend to close up on the leaders, they can be held back with bucking straps. Bucking straps are lines arranged just like team lines with cross-checks. However, the free ends are not held by the driver, but attached to the draw chain. Attach them to the chain where it passes between the wheeler's singletrees. For more on multiple hitches, see page 234.