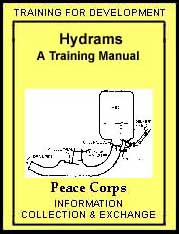 Battery of hydrams - (or parallel hydrams) a hydram installation where two or more hydrams are connected to the same source with different drive pipes, but usually with the same delivery pipe. This type of installation is used where the size of the hydram is limited.

Ram box - the small structure usually made out of concrete and/or wood which houses a hydram, protecting it from freezing, weathering, and possibly from vandalizing.

Series hydram - a hydram installation where two or more hydrams are used in series to pump water higher than one hydram could alone.