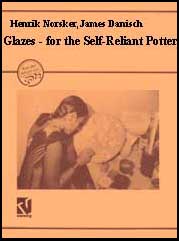 Glazes -for the Self-Reliant Potter

Henrik Norsker has been making pottery since 1970. He left his pottery workshop in Denmark in 1976 to establish a pottery school in a village in Tanzania. Since then he has continued working in developing countries with promotion of small scale ceramics industries. Besides Tanzania he has been employed in ceramics projects in Burma, Bangladesh and Nepal.

James Danisch has been making, selling and experimenting with ceramics since 1963. He has taught college level ceramics in Scotland and California, and has conducted workshops in the US, South America and Canada. From 1984 to 1992, he has been working with small scale and rural ceramics development in Nepal. His articles on ceramics have been published in several magazines, and he has studied traditional and he has sudied traditional and modern techniques in Europe, Nepal, India, Thailand, Burma, South America and Mexico.