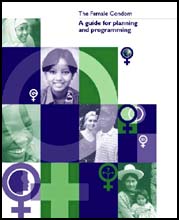 2. What is the female condom? 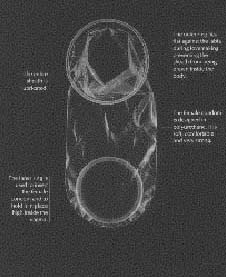 This Section provides an overview of the product and compares the female condom to the male condom.

The female condom is a strong, soft, transparent polyurethane sheath inserted in the vagina before sexual intercourse, providing protection against both pregnancy and STIs. It forms a barrier between the penis and the vagina, cervix and external genitalia. It is stronger than latex, odourless, causes no allergic reactions, and, unlike latex, may be used with both oil-based and water-based lubricants. It can be inserted prior to intercourse, is not dependent on the male erection, and does not require immediate withdrawal after ejaculation. The female condom has no known side-effects or risks.

The female condom has been available in Europe since 1992 and is now available in dozens of countries throughout the world. In 1993, the US Food and Drug Administration (FDA) approved the female condom for marketing and distribution. The female condom provides dual protection for preventing pregnancy and STIs, which, based on laboratory studies, should include HIV/AIDS.

Comparison between a female condom and a male condom

Male and female condoms should not be used together as friction between the plastic and the latex rubber can result in either product failing.