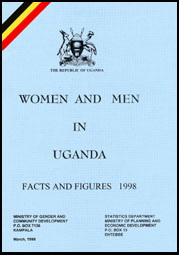 Family life and household structures are changing with time. Changes in marriages and divorce rates and in household sizes and structures have affected both women's and men's life styles.

Source: The 1991 Population and Housing census.

Traditionally, men are regarded as heads of households. Table 2.1 and Figure 2.1 show that the proportion of women headed households is higher in the urban areas than in the rural setting. This may be because more urban women are in paid employment and can independently head and support their households.

Source: The 1991 Population and Housing Census

The 1991 population and housing census enumerated 38,521 households which were headed by children below age 18 years. This was 1.1 percent of all households.

In the 1991 population census, information on marital status was collected from all persons aged 15 years and over. Of all persons who reported their marital status, 51.7 percent were women and 48.3 percent men.

The percentage of widowed, divorced/separated women is also significantly higher than that of men because customs and bride price practices make it easier for men to remarry than it is for women.

According to the 1995 UDHS, the median age at first marriage was 17.5 and 23.1 for women and men respectively. This is partly because women are generally regarded mature at a younger age than men.

The fear of early pregnancy outside marriage, social expectation and the value for the bride price tends to make women enter marriage at an earlier age than men. Another possible reason could be the preference to educate boys that tends to delay them from entering into early marriages.

Source: The 1991 Population and Housing census

Fig. 2.3: Type of Dwelling Unit by Sex of Household Head

Table 2.4: Percent Distribution of Permanency of a Dwelling Unit by Sex of Household Head.

Source: The 1991 population and Housing census.

Table 2.4 shows that slightly higher percentages of (12.8 and 35.2) of the women-headed households stay in permanent and semi-permanent dwelling units compared to (11.4 and 27.4 percent) of the men-headed households, respectively. This could be explained by the gender roles whereby women are traditionally charged with home making, if given the chance a woman would choose a more permanent structure.

Fig. 2.4: Source of Water by Sex of Household Head