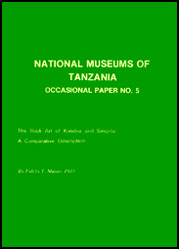 In very few cases is superpositioning of styles a realiable indicator of relative chronology. The order of superpositioning is so inconsistent that other than the white semi-naturalistic style which in all cases overlies every other style, no general statements can be made about the relative age of the others. In Zambia, Rhodesia and South Africa, the white style of crude animals and geometric patterns and designs is not only considered the latest, but also attributed to the Bantu while the earliest styles are the work of the Bushmen (Rudner and Rudner 1970:172; Woodhouse 1970:85; Cooke 1969). In Tanzania, this style has a wider distribution than any other, suggesting, inter alia, that the people responsible for this style were more widespread in Tanzania than the people responsible for the earlier styles.

The styles suggested here correspond more to those suggested by Odner (1971) for the Iramba rock paintings and Fozzard (1959) for the Usandawe paintings, and much less to Leakey’s detailed stylistic sequence based on the Kisese-Cheke area and Mungumi wa Kolo sites in Kondoa. On the basis of pigment used, scenic association and the lack of any consistent order of superpositioning, styles 1,2 and 3 would appear more or less contemporary although 1 and 2 may have come earlier in some sites. Although this is only a speculation, it seems to be supported by the fact that there are a number of shelters, especially in Kondoa where style 1 and 2 appear alongside one another and associated in the activities depicted, for example human being in style 1 hunting animals in style 2. If this is true, then style 3 in which the animals are a semi realistic momentary expression is a direct derivative of the bondly filled-in silhouettes of style 2.

In summary therefore we may group the rock art of central Tanzania into four broad relative chronological phases.

I. Red conventionalized schematic human figures and naturalistic filled in animals, The pigment varies from vermillion to scarlet red.

II. Naturalistic animals executed first in open line outline profile and then infilled with various motifs, the latter sometimes matching the natural skin pattern of the animal. A few semi-naturalistic human figures sometimes depicted with a loin cloth also occur. Red is the predominant colour but a few examples of brown and white are also found.

A very prolific art style in which animals and human beings are executed in various shades of white. Sometimes domestic animals are shown in this style. Overall the finished piece of work is rather poor. Black pigment may be used, but rarely. This style appears more wide spread in deep caves in Singida than in Kondoa.

Lines, circles, dots, squares hand and finger prints and enigmatic motifs are executed predominantly in white and may therefore be contemporary with III or later. This style has never been reported to underly II and is definitely later than II. Orange, yellow and brown are also used.