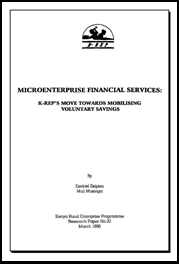 We are indebted to several people for their involvement in the evolution and later development of this study. We are most grateful to the management team led by Mr. Kimanthi Mutua for their foresight in recognising the need for K-REP to mobilise voluntary savings as she moves towards establishing a bank. We also owe special thanks to members of the research department who carried out an earlier study on savings mobilization whose findings and recommendations prompted this study.

The study benefitted from very incisive suggestions and comments at the design stage and latter during the write up of the report. We wish to note the following; Aleke, Oketch and Nasubo.