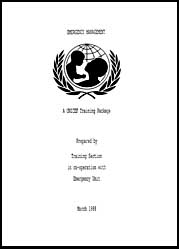 - To describe all the elements of setting up a field operation

- To be able to formulate, document and communicate specific proposals for UNICEF's intervention

- To identify ways and means for speeding up the planning process

1. Common problem in emergency operations: lack of time for comprehensive planning. What problems does this situation create and how to avoid or at least mitigate them.

2. The "fast track" to preparing plan of operation:

a) Identify gaps in the services provided (give examples using Fred Curry's "gap identification sheet") to avoid duplication and fill the gaps in those areas of UNICEF's mandate.

b) Plans of operation should be prepared by field people assisted if necessary by HQs personnel or outside consultants.

3. Steps of a plan of action (Table 8 of the Emergency Handbook)

4. Elements of setting up an operation (Table 9 of the Emergency Handbook

a) Poor definition of the problem from beneficiaries' perspective

b) Failure to be explicit how action relates to UNICEF policy

f) Over extension; more responsibility than they can handle

g) Failure to examine cause and effect relationship (the negative impact)

h) Failure to get appropriate technical expertise at the right time

l) Failure to plan for a monitoring component

The recent drought emergency which has effected large parts of Somalia, involving many thousands of people, has highlighted the inadequacy of the present systems to product the onset, and cope with the existance of a disaster of such magnitude. Despite the obvious concern of the Government of Somalia, the UN and the Voluntary agencies, the mounting of an appropriate surveillance system of the drought affected areas, as well as delivery of any form of relief was considerably delayed. This delay has undoubtedly resulted in death and suffering to the victims of the drought/famine.

With the above in mind, UNICEF proposes the establishment of a unit with the central objective of establishing a broad based surveillance system to be linked to an appropriate emergency response facility. The realization of such a comprehensive monitoring and responsive machine would require the upgrading of present health delivery facilities (specifically the Regional Hospitals, Maternal and Child Health clinics and the Primary Health Care units) within the drought-prone areas.

It is obvious that efforts to improve the collection of data and the functioning of remote health care systems must be done in close collaboration with, and under the guidance of, the appropriate Ministries of the Government of Somalia.

It is hoped that the close and effective relationship which UNICEF presently shares with the Somali Red Crescent Society can be further expanded in order that these two agencies can develop strategy and implement programs on an ongoing basis.

The program would also, of course, require the close collaboration and support of MHO both at local and central levels. The need for support and assistance from the other UN agencies in Somalia would continue as it has in the past (in the response to the current drought and also in the long-term).

Recent discussions of these proposals with representatives from the Faculty of Medicine, University of Somalia, have been most encouraging with suggestions for ongoing programs of data collection and contribution of resources to involve both faculty members and medical students. This would, of course, be an excellent input to the program, with the pooling of experience and expertise of local academics as well as an introduction to the developing programs by the future medical personnel of the country.

The close and effective relationship which UNICEF presently shares with various voluntary agencies, well demonstrated by the three teams presently operating supplementary feeding programs in the Central Rangelands (OXFAM, SCF (U.K.) and Concern Ireland) would continue. It is envisaged that the assistance of NGO's would be sought for (other) specific programs as the need arises, such as the planned collaboration with MSF Netherlands. The experience and expertise available within the Voluntary Agencies is a valued resource which UNICEF greatly appreciates.

The productive relationship which UNICEF shares with various bilateral and multilateral agencies (such as US AID and EEC) would continue with funding as well as the provision of various resource personnel (as was the situation with the rapid deployment of nutritional surveillance teams from CDC Atlanta who collected data early in the drought situation.)

The Unit would see its role as meeting the following commitments:

1) A rapid assessment of the extent of the present drought, specifically by nutritional surveys in those areas in which some doubt exists as to the situation. These areas would include Gedo, Bakool and Lower Juba. These assessments would be based on a standardized, reproducable format. Depending on the outcome, some supplementary feeding programs may need to be established. Early dissemination of information to Government agencies, Voluntary agencies and UN bodies would be a priority. It is hoped that reliable and reproducable nutritional data will be available and processed from the above regions by the first week in September.

It is planned that local staff (recruited by the Somali Red Crescent Society) will be field trained in the techniques of nutritional survey with the view to their increasing role in data collection, tabulation and dissemination. These training programs are presently underway and should be expanded at the central and regional level.

2) Using the above data, as well as that presently being collected from the regions in the Central Rangelands (in association with the established Supplementary Feeding Programs) we would plan a repeat survey (in the same format) in three and six months to evaluate nutritional trends and the response to the established supplementary feeding programs. This information would serve as an invaluable data-base for future studies as well as a method of monitoring the nutritional status of the populations which, in conjunction with other information, could serve as input to systems to serve as an 'early warning' to future nutritional catastrophes. As well as the obvious function of identifying pockets of populations which may need nutritional support. The input from established PHC systems need be standardized and closely monitored.

3) The continuation of close ties with the implementing agencies involved by frequent dissemination of information and functional program support.

4) A. The Upgrading of the Maternal and Child Health Facilities in the areas considered 'at risk'. This would include systematized surveys of the state of the clinics at present with recommendations for improvement, early priority would be directed to the following:

a) repair of buildings where necessary

b) Provision of appropriate drugs and medications

g) where practical establishing a cold-chain

B. The Upgrading of Regional Hospitals with particular attention to the following:

a) Provision of safe and reliable water supply to the hospital

d) review of provision of food for in-patients

5) Rapid dissemination of information collected to all agencies interested, this may take the form of 'news-sheet', monthly meetings or a combination. The unit would be open to interested parties to answer queries, MHO would be asked for frequent input into this process.

6) The need for development of an 'early warning system' specifically in relation to the nutritional status of the population, is apparent. A number of systems already in existance such as the FAO commodity prices listings and the meteorological data-base in which the EEC is involved could be utilized as inputs which could be processed with a view to predicting disaster at a time when appropriate intervention might limit the outcome.

Budgeting for the above proposals is being developed in conjunction with available funds.

The time-frame for implementation of the individual proposals will depend on priorities. A full assessment of, and appropriate response to, the present emergency will precede implementation of more long-term programs.

1. In your view, what were the key points learned in this session?

2. Comment on the application of these within UNICEF and your situation.

3. Suggest any additional critical points that should have been covered.

4. Do you have comments on the suggested reading?

Suggest any additional information sources for sessions of the day.
Texts:
Persons:
Case Studies:
Film:
Other:

5. Comment on the learning methodology (lectures, group work, films) used in the session.