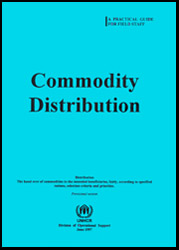 In most refugee communities there are formal/informal structures or committees formed by refugees. These most often reflect those existing before flight. Ideally, the representatives in such structures should change periodically in order to limit the potential for abuse which can accumulate over time. Often, the leadership starts out predominantly (or totally) male. Through community development activities, women's participation can be increased in order to allow full community representation. How to implement this will depend on the social context and implementation is an ongoing process. It should start at once. In an emergency situation, directive action may be necessary to ensure the participation of women and any marginalised groups.

Family-specific factors include the demographic composition of the family: the number, age and health of children, the presence of men or other adult support, and the presence of dependent adults, for example, the elderly. Optimum use of the women's time is a key consideration. Some generalisations are possible: for example, on average some 10 % of the women will be pregnant or lactating and thus should be using MCH services. Other assessments require an analysis of the situation of individuals within the community. The health and the educational needs of children will help determine women's priorities for the use of their time. Health needs are likely to be most acute in the early stages of an emergency, demanding, for example, a mother's presence at selective feeding centres.

The role of men may also have changed

Many of the necessary practical decisions covered in these guidelines can and must take account of the needs of women. For some arrangements, however, there may be no choice, and the involvement of women will be conditioned accordingly. The implications of different approaches for the role of refugee men must be considered, and the possibility of their relieving women of some of their traditional and most time-consuming tasks investigated. Before flight, most heads of household were male and the providers or “bread-winners”, while the women bore the major domestic burden of work. With flight, refugee men have often lost much of their role, while the tasks of refugee women have both increased and become more difficult.

Deciding the nature of involvement of refugee women

All of the previously mentioned factors influence the type of involvement in food distribution that is possible and appropriate. The benefits for women of their involvement, and the advantages of using their expertise, must be considered against the additional burden and any attendant risks. The refugee womens own assessment of the relative importance of each factor should generally be determining. In some societies establishing this may not be possible unless those seeking the information are not only well informed and sensitive to these issues, but are themselves women (interpreters, if needed, should also be women).

There are three broad possible areas for the involvement of refugee women: in the decision-making processes and monitoring; in the food distribution itself (women supervise and/or hand out the commodities); and in collecting the food (where it is distributed to women not men).

¨ Women must be involved, through their own representation, in decision making and monitoring, from the elaboration of the system and the determination of their own participation in its implementation, to membership of the food or supervisory committees that should be established to monitor both the system's effectiveness and each distribution. In the great majority of refugee communities, the objective will be better served if refugee men are represented too.

¨ Women should choose representatives who will be involved in the food distribution itself. The extent and nature of this participation will depend on factors specific to that situation.

¨ Women should actually collect, or at least be present at the distribution of, the food for their household (whether or not they are its head), if they themselves feel that this is the most effective way to ensure that they receive their fair share and retain control of its use thereafter.