This part of the module discusses the factors affecting mitigation strategies including:

The aim of a mitigation strategy is to reduce losses in the event of a future occurrence of a hazard. The primary aim is to reduce the risk of death and injury to the population. Secondary aims include reducing damage and economic losses inflicted on public sector infrastructure and reducing private sector losses in as far as they are likely to affect the community as a whole. The objectives are likely to include encouragement for people to protect themselves as far as possible.

Any mitigation strategy is likely to include a range of measures from the menu of actions outlined in Part 2. A set of actions that includes some engineering measures, some spatial planning, and a degree of economic, management and societal inputs will be needed to bring about effective mitigation. A mitigation program that concentrates solely on any one of these five aspects will be unbalanced and is unlikely to achieve its aims.

A mitigation strategy has to be designed for its proposed application. Disaster mitigation programs carried out in the Philippines are unlikely to be directly transferrable to Peru. There are few standard solutions. Some individual elements and techniques of mitigation will be transferrable - compulsory purchase techniques for widening roads in dense urban areas that have been used in Peru may be of interest to the planners in the Philippines - but the full range of measures needed to reduce disaster potential for an individual application is likely to be unique. In each country the range of hazards faced are likely to be different. The types of infrastructure, houses and other elements at risk will have their own characteristics. The types of actions that are possible including the legislative framework, the social attitude to the problem and the budget that is available will specify what constitutes an effective mitigation program.

Perhaps the greatest difference likely to be encountered between the various countries served by UNDP and DHA, and between the various societies threatened by disasters, is the budgetary constraints on spending for mitigation. The Japanese Government spends over $2 billion a year on disaster mitigation and preparedness. This is more than the total annual government revenue of half the world's nations.

In most of the developing nations threatened by disaster, capital for investment is at a premium. Investment in agricultural irrigation projects or in industrial manufacturing capability has a demonstrable effect in increasing economic output. Investing in disaster mitigation is likely to mean fewer resources left for irrigation projects, industry or hospitals. And yet not spending on disaster mitigation means that the investment in irrigation projects, industry and hospitals will be wasted if they are destroyed in a future occurrence of a hazard. The spending of a few percent extra on a new facility to build it a little stronger and protect it against a future threat is usually seen as prudent. Mitigation investment has to be seen in terms of the price of protecting existing and future infrastructure.

The level of investment that is justified to protect society, its economic activities and its built environment is a matter of political decision making, and the economics of risk. Choosing an appropriate level of safety for building codes, for example, is a matter of considerable debate in the engineering profession. The cost of providing safety is considerable and the stronger a building is, the more it costs. Structural resilience standards written into code requirements in United States, where GNP per capita is about $20,000 may not be directly applicable in countries with income levels of $1,000 GNP per capita, but the attitude to safety that the code espouses is applicable. Appropriate levels of investment in safety need to be defined for each country.

Decision making on appropriate levels of investment in disaster mitigation depends on how likely the hazard is to occur, and what would be the impact of the hazard if it does occur. The assessment of risk and use of vulnerability evaluation in decision-making is covered in the module on Vulnerability and Risk Assessment.

The costs and benefits of alternative investment strategies need to be carefully evaluated. In a number of evaluations of disaster mitigation projects, it has been demonstrated that well-targeted investment will repay itself several times in the event of a disaster in reduced levels of direct damage cost. It will also have the additional benefits of saving life and reducing consequential losses to the economy and the costs of emergency operations. The use of a systematic framework of risk assessment to establish which hazards are most likely to occur and the probable effects will help define the priorities of a mitigation program - whether to build flood protection barriers or to establish a public information campaign for cyclone-resistant housing, for example.

Successful mitigation entails a number of fundamental changes in the attitudes of the people at risk, in the processes of creating and modifying the physical environment and in the physical layout of a community. These changes take time.

The nature of political administrations requires that projects resulting in tangible or demonstrable outputs within the lifetime of the administration (two, three, four years) are preferred. Many visible elements of mitigation can be achieved within that time span; engineering projects for hazard mitigation, building strengthening, changing the use of vulnerable structures, widening streets, for example, but these alone are unlikely to result in a sustainable reduction in risk. A balance of both immediately visible outputs and long term, sustainable benefits is needed.

Financial incentive schemes to reduce disaster risk requires a considerable government budget for disaster mitigation. The scale of the problem faced in trying to combat a large-scale hazard like earthquakes or tropical storms is the geographical extent of the zone at risk and the number of elements at risk in the region. Programs for housing upgrading, hazard education or community action is likely to involve millions of households. The resources necessary to accomplish this may be considerable.

Occasionally mitigation projects are prompted by predictions and studies of the likely consequences of hazards but in many cases implementation of mitigation comes about mainly in the aftermath of a disaster. Rebuilding what has been destroyed and a recognition that the damage was avoidable can generate protection against a future disaster. Public support for mitigation action is strong with the visible evidence and recent memory of the disaster, or the knowledge of a disaster elsewhere.

Hazard-specific programs tend to follow the occurrence of a particular hazard irrespective of the multi-hazard needs: A cyclone disaster tends to lead to cyclone mitigation, even if flood risk is higher.

For most hazards, mitigation projects tend to focus on the reconstruction area, even if other areas are more at risk: An area damaged by an earthquake is likely to be targeted for immediate mitigation measures despite the fact that the next earthquake may be unlikely to strike the same place, but is more likely to occur elsewhere in the region. This may not be true for some hazard types especially floods which tend to reccur in the same locations.

The fact remains that reconstruction activities with large amounts of investment being put into the area and the opportunities for change represent significant opportunities to carry out mitigation. The techniques learned and the expertise developed will be applicable elsewhere in the country. It is important that the mitigation actions are promoted as far as possible beyond the reconstruction area to other areas at risk from similar hazards, and that mitigation encompasses all the hazards likely to be encountered. The experiences of the disaster, the reconstruction and the mitigation measures it engenders should be exported with relevant adaptations to the places that need it most.

Successful mitigation practices must involve collaboration between the local community and larger-scale development agencies. The local community must be aware of the risk and concerned to take action to prevent it: in this they may need technical assistance, material assistance and help in building their own capabilities. These forms of assistance may not be available in the poorest most vulnerable communities, in which case they need to be provided by external agencies. One of the most effective ways in which such an agency can help promote community protection is by enabling communities to formulate their own project proposals and negotiate with government and the larger development agencies (or government agencies) for the necessary government actions and the material assistance they need. This is especially true for technologically based engineering projects, such as large embankments, spillways, and diversion works. For example construction of community defences based solely on hand-labor and local materials alone may result in poor disaster defences. But local labor supplemented by heavy machinery, and local materials bonded by factory-made materials (e.g. cement or wire mesh) provided from external sources can result in lasting defences which the local community will be able to trust and maintain in the long term. Similarly a community-based mitigation program may need government action to provide land for safer resettlement of the most vulnerable, which can most effectively be determined by the community itself.

The empowerment of the community created by achieving such goals and obtaining assistance from government agencies is likely to be a lasting development benefit. 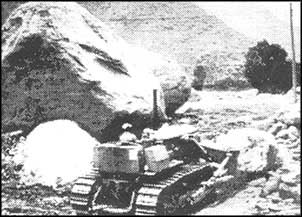 The empowerment of the local community acquired through negotiating assistance from government agencies can be a lasting development benefit.

A government bulldozer cleans debris from a mud-flow in the Rimac Valley according to plans drawn up by PREDES in consultation with the local community.

Mitigation strategies will in many cases be incorporated as an element of larger scale development programs; any successful strategy should include a range of measures from the menu of possible actions. The appropriate mix will be different for each location and type of hazard.

The selection of an appropriate strategy should be guided by evaluating and considering the costs and benefits (in terms of future losses saved) of a range of possible measures.

To obtain political acceptability, a mitigation strategy may need to contain a mixture of immediately visible improvements and of less visible but long-term sustainable benefits.

Mitigation strategies are much easier to implement in the immediate aftermath of a disaster or near-disaster; awareness of the impact of similar natural hazards elsewhere can also assist in obtaining public and political support for disaster protection.

Mitigation strategies developed during disaster reconstruction should encompass all the hazards likely to be encontered in the future and promoted as far as possible beyond the reconstruction areas to other areas at risk from similar hazards.

Empower the local community by promoting planning and management of its own defences and obtaining outside assistance only where needed.