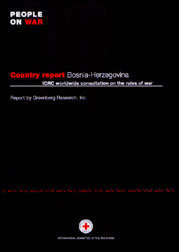 About the People on War Project

To mark the 50th anniversary of the modern Geneva Conventions (on 12 August 1999), the ICRC launched its People on War project with the aim of building greater respect for fundamental humanitarian principles. At centre stage is a worldwide consultation giving the general public a chance to air their views on the many facets of war. The idea was that civilians and combatants alike would be able to share their experiences, express their opinions on what basic rules should apply in war, discuss why those rules sometimes break down and look at what the future holds.

With this in mind, the ICRC commissioned Greenberg Research, Inc. to design a research programme that would enable people to be heard in the most effective way possible. Under the guidance of Greenberg Research, ICRC staff and Red Cross and Red Crescent volunteers carried out this consultation in 12 countries (Afghanistan, Bosnia-Herzegovina, Cambodia, Colombia, El Salvador, Georgia/Abkhazia, Israel, the occupied territories and the autonomous territories, Lebanon, Nigeria, Philippines, Somalia and South Africa), conducting in-depth, face-to-face interviews, group discussions and national public opinion surveys. Surveys on the basis of a questionnaire only were conducted in a further five countries (France, Russian Federation, Switzerland, United Kingdom and United States) in order to reflect these people’s perceptions of war.

Greenberg Research analysts then prepared a series of Country Reports on the basis of the findings. The reports open up this new, important discourse to a wider audience, while remaining conscious of the need to protect the safety of all those who participated.

By making this consultation public, the ICRC hopes to initiate a local and international debate on the humanitarian aspects of war - a debate that should be joined by the major political players, international and non-governmental organizations and aid specialists.

Greenberg Research is an opinion research firm that has worked for over two decades to help organizations and leaders around the world advance their goals in the face of rapid change. It specializes in using advanced methods of opinion research - surveys, focus groups and in-depth interviews - to help form strategies for political parties, corporations and non-governmental organizations.

Greenberg Research has extensive experience in Europe and the United States, but also in the Middle East, Asia, southern Africa and Central and South America. It has conducted research in war-torn, politically complex and remote settings. In its work for corporations and non-governmental organizations, it has explored a broad range of global issues, including landmines, genetic engineering, climate change, race and gender relations, trade and information technologies.