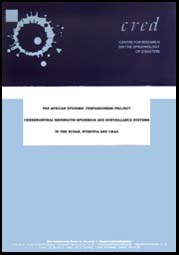 This study was organised in collaboration with the WHO Communicable Diseases Division (CDS) in the framework of the Pan - African Epidemic Preparedness (PEP) Project.

1.2. Objectives of the Study

The secondary objectives were: