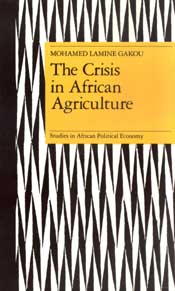 Mohamed Lamine Gakou here gives an overview of the 'agricultural question' in contemporary Africa. This is a difficult task if the writer wishes both to respect the variety of situations on this vast continent and avoid the detailed juxtaposition of case studies, both to spare the reader the jargon of specialists and remain brief without lapsing into superficiality. But it is a task in which the author has succeeded.

Africa's agricultural failure - this continent is the only one in which per capita agricultural production is falling - is certainly widely recognized, but the explanations for it remain generally partial and contradictory. Does the distant past (precolonial Africa (Chapter 2)) bear some share of responsibility? If there is a 'specificity' - over and beyond their great variety - in the modes of organization of the rural areas of most of Africa, it is probably that the still virtually untouched communal or tribute-paying forms involved an extensive occupation of the land. This made possible a much higher level of food self-sufficiency than is often supposed thanks to a relatively high labour productivity (which went hand in hand with very low yields per hectare). A higher per capita production demands the shift to intensive modes calling for a considerably higher overall quantity of annual labour. This increase in per capita production is thus accompanied by a lower productivity of labour (of physical production per 'day' of labour) but also by a higher yield per hectare. The shift to intensive agriculture, the sine qua non of any development worthy of the name, constitutes the challenge that the African peoples will pick up.

But the challenge has not yet been picked up. Colonization not only failed to pick it up; it never set out to do so. It was easier for it, as Gakou shows (Chapter 3), to secure an immediate super-profit at no cost (involving no investment) by forcing the peasants of Africa to perform unpaid - or very poorly paid - surplus labour through forms of indirect control (Chapter 6). A slightly higher per capita production at the price of rather more work, without machines, or modern inputs (but destroying the soil of Africa), combined with a deterioration in the conditions of peasant life were enough to elicit a considerable profit for the capital dominating the global system. Colonization thus continued the old tradition of the slave trade; exploitation by pillage that guaranteed neither the long-term reproduction of the labour force, nor the reproduction of the natural conditions of production.

Independence did not alter this mode of integration into the world capitalist system. As Gakou shows (Chapter 4), independence came in response to the demands of the new stage of the globalization of capital (the rebuilding of Europe and the hegemony of the United States) and not in response to the African peasant problem. Moreover, the prosperity of the 1960s in the West led in Africa to a new euphoria for the 'extroverted system' - that system oriented to export markets. And while, courageously and clear-sightedly, René Dumont, ever sensitive to the peasant question, denounced the 'false start in Africa', the World Bank, which today weeps crocodile tears over the fate of the peasants (while its counterpart the International Monetary Fund makes the poorest foot the bill for the bankruptcy) sustained with overwhelming enthusiasm the policies that ten years later were to lead to catastrophe.

The crisis of the 1970s and 1980s results from the combined effects of the over-exploitation of the land and of men and women, raised to a level that can be raised no more, and the crisis engulfing the capitalist system as a whole. Faced with this the proposals that rain down on Africa at an ever increasing rate are scarcely anything more than the expression of the 'quest for palliatives', as Gakou shows (Chapter 5).

If it is only a matter of palliatives, it is because the 'pro-agriculture' talk nurtured by the media in the West is contrasted with an alleged 'preference for industrialization' which is said to be the source of the bankruptcy. For the reason for seeking greater output per farmer is precisely in order to make possible a higher degree of urbanization. But urbanization without industrialization cannot but be parasitical and disastrous. Conversely, industry (but not just any industry) is necessary to make greater agricultural output possible: it has to supply it with machinery and offer it a growing market in return. That is what the option for an autocentred national and popular strategy means. If this option is rejected in favour of a systematic preference for integration into globalization (i.e., the world capitalist economy), talk of giving priority to agriculture becomes hollow and at worst demagogic. The World Bank Berg Report1 has these characteristics, refraining as it does from making a self-criticism of the Bank which supported the policies that led to the present bankruptcy, refraining from making a critique of import-substitution industrialization (which finds its preferred market in the expansion of demand from the middle classes at the expense of the rural and urban popular classes) which it advocated, and refraining from analyzing the implications of its proposal for export-oriented industry. But this derives its 'comparative advantage' from its low wages, which it thus contributes to reproducing. The contradictions of these 'proposals' are moreover obvious: export-oriented industry presupposes low wages and consequently, low food prices, at the very time that the raising of these latter to inspire the peasants to produce more is being recommended.

The populist dress that MacNamara, when he was President of the World Bank, gave these proposals does not alter their implications. The themes of 'basic needs' and the strategy of 'family smallholdings' analysed by Gakou scarcely conceal the worst choice scenario which unfortunately some confused sections of the Western left have confused with the popular interest. In any case, these oratorical flourishes have never prevented Western 'aid' agencies from giving de facto preference to support for agri-business and the kulaks - in the name of efficiency. The fact that these policies continue to be advocated in the West testifies basically to the lack of seriousness with which Africa is treated. In fact, Africa, in the imperialist vision of the world, is above all for the West a source of mineral resources. Neither its industrialization nor its agricultural development are thus really taken seriously.2

Nothing in nature ordains that African agriculture should be impoverished. Doubtless the under-population of tropical Africa (compared with the dense population of tropical Asia) constitutes an obstacle to intensification which calls for major internal population movements. And whatever has been said, the Sahel itself is not 'poor'. Here there is water (a series of rivers whose flow is equal to that of the Nile, exceptional underground water layers, according to studies that have been kept secret3), sources of energy (is not uranium one of these sources? And the sun? And oil less than a thousand metres down?), land suitable for cultivation, and people. A social system that proves itself incapable of co-ordinating these 'factors' in a satisfactory plan able to feed the people involved does not deserve to be described as rational. Let us recognize then that the capitalist system is not rational since it does not necessarily guarantee the reproduction of the labour force in each of its segments. Here, in the Sahel, for capitalism such as it is, it is the existence of the Sahelian peoples that is 'irrational'. For this capitalism, things would be more profitable if there was only uranium in the Sahel and no useless Sahelians. Such is the logic of the world system for which Africa is still exclusively a source of raw materials. From their endless stress on emergency 'relief' distributions, Western and European institutions have created the impression that the Sahel was irrevocably condemned. Thus we see a certain progressive institution accept as self-evident, in a study of 'energy prospects' for the region, that since uranium is not intended for the 'natives', the Sahelians must be taught better ways of gathering brushwood in the desert and how not to waste it in Malagasy stoves! So let Africa adapt itself to the wastefulness of the West. Is there a better expression of the fate as mineral supplier to which imperialism consigns the continent and of the subordination of all so-called development programmes to this essential logic than this naive acceptance of the 'imperatives' of exporting the energy resources of the region? But why not the opposite; why should not Africa recover control and use of its resources, and Europe adjust itself to that?

The capacity of capitalism in the abstract to 'solve the problem of African development' could be discussed ad infinitum. Concrete capitalism, such as it actually exists, that is, globalized, not only has not 'solved' this problem (it even created it) over the last 150 years (or even over the last 400 years since the slave trade), but envisages nothing for the next 50 years. The challenge will therefore only be taken up by the African peoples, the day that the necessary popular alliances enable them to delink their development from the demands of transnationalization.

2. Faycal Yachir, The Struggle over Africa's Minerals: What is at stake?, forthcoming in this series.

3. Explanatory notes and planning maps for the exploitation of the underground waters in the Sahel, Bureau de recherche géologique et minimânt, 1975.