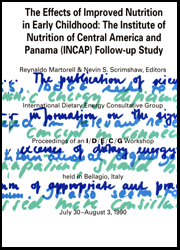 From 1969-77 INCAP conducted a longitudinal study of growth and development with a nutrition intervention in four rural Guatemalan villages (Martorell et al. 1995). The population was Ladino, or mixed Spanish and Amerindian, heritage. Four villages were selected, stratified by size (i.e., two had 900 people each and two had 500 people each) and randomly assigned to receive one of two types of supplement. Two received Atole, which is a high energy drink with a high protein content (163 kcal or 682 kJ plus 11.5 g protein per cup or 180 mL) and two received Fresco, a low-energy drink with no protein content (59 kcal or 247 kJ plus 0 g protein/180 mL). Consumption was ad libitum but recording, daily to the nearest 10 mL, ceased when children reached 7 y of age. As reported by Martorell et al. (1995), both supplements contained equal amounts of selected micronutrients (iron, fluoride, riboflavin, niacin, thiamin, ascorbic acid and vitamin Al, while the Atole also contained calcium and phosphorus. Extensive growth and development data were collected in children £7 y, including skeletal maturation, assessed by counting the number of ossification centers present in a hand-wrist X-ray. At follow-up, during 1988 and 1989, researchers returned to the four study villages. All residents of the four villages were considered potential subjects for the maturation study if they had participated in the original INCAP study, were between 11 and 18 y of age at follow-up and were nonpregnant. Coverage was 80% and the radiographic sample for the four villages consisted of 883 subjects.

Hand-wrist X-rays were taken by trained INCAP field workers after gaining informed parental consent and screening females of postmenarcheal status for pregnancy. The radiographs were 8 x 10-inch anteriorposterior images of the hand-wrist area, exposed through an intensifying screen using a portable X-ray machine at a distance of 1 m. An adjustable columnator was used to reduce scatter radiation. The radiation dosage received was 0.015 REM; allowable annual exposure for the U.S. population is 0.5 REM beyond background radiation. The research protocol was approved by the University Committees on Human Subjects Research of Stanford and Cornell Universities and INCAP.

All radiographs were assessed in the field by one investigator (K.E.P.). Skeletal maturation was assessed by the Tanner-Whitehouse-2 (TW2) method (Tanner et al. 1983). The TW2 method involves the examination of 20 bones of the hand and wrist and the assignment of a letter grade to each bone dependent on the attainment of clearly described bone-specific maturity indicators. The letter grade is then converted to a numeric score in accordance with the tables given by Tanner et al. (1983) and the scores are summed for each individual to give a maturity score on a scale of 0 to 1000. Maturity scores can be converted to SA for each individual by comparison to British standards given by Tanner et al. (1983) and the relative maturation can be assessed by comparison of the SA to the individual's chronological age (CA). In this study the radius-ulna-short bones (RUS) option of the TW2 method, using only the radius, ulna and 11 short bones of the hand, was used to determine maturity scores, SA and relative maturation. The carpal bones of the hand contribute little to the assessment of skeletal maturation after the onset of puberty (Johnston and Jahina 1965) and the RUS scheme therefore was more appropriate for the assessment of variation in our sample of 11 - 18 my-old subjects. The accuracy of the TW2 method is discussed by Tanner et al. (1983). Reliability, composed of both precision and dependability, was assessed for the single observer in this study as the coefficient of reliability (R2) in a test-retest assessment of a random 10% of the sample radiographs (Marks et al. 1989). The coefficient of reliability was very high at 0.858. Of the 14.2% unreliability estimate, 3.33% could be explained by the age of the subject, 1.1% by the sex of the subject and 0.1% by the supplement group (Atole, Fresco) to which the subject belonged.

The outcome variable in all analyses was the SA deviation, or relative maturation computed as SA -CA. Approximately 68% of the females in Cohort a had reached skeletal maturity (SA = 15.9 y);in cases where CA was ³15.9 y, SA was set equal to CA and the SA deviation score was 0. A large number of zero values accumulated at the higher ages of Cohort 2 and this created analytical problems when testing for group differences in SA deviation scores. Therefore, Cohort 2 females were excluded from the analysis reported in this paper. In contrast, only 20% of the males in Cohort 2 had reached skeletal maturity (SA = 18.0 y) while none had reached a CA of 18 y. Therefore, this entire cohort was retained for analysis.

All statistical analyses were sex- and cohort-specific, with age controlled within cohort. Sex specificity was essential due to sexual dimorphism in skeletal maturation. CA was controlled in all within-cohort analyses because SA deviation will regress naturally toward zero with advancing age.

The analysis was conducted in two stages. First, the effects of e arly nutritional supplementation were assessed by comparing supplementation groups (Atole vs. Fresco) using the GLM procedure of the SAS statistical package (SAS Institute Inc. 1985) for analysis of covariance (ANCOVA). Analysis of individual supplement intake followed, to establish the dose-response to early supplementation in Atole male subjects in Cohort 2. This analysis was restricted to Cohort 2 because most of the subjects in the younger cohort had<3 y of exposure to the intervention and that exposure was confounded by age. Cohort 2, on the other hand, was exposed to the intervention throughout gestation and the first 3 y of life, with variable exposure thereafter, again depending on age. Previous analysis (Schroeder et al. 1995) of anthropometry from this study has shown that supplementation effects on linear growth are seen until 3 y of age and not thereafter. Only Atole villages were used in analyses of dose-response because the mean amount (110 kcal/d or 460 kJ/d) and range (0-366 kcal/d or 0-1531 kJ/d) of supplemental energy ingested was greater than in Fresco villages (mean = 17 kcal/d or 71 kJ/d, range = 090 kcal/d or 0-377 kJ/d). Individual supplemental energy intake was used as a continuous independent variable in a multiple regression model using the REG procedure, after controlling for socioeconomic status and village size in an ANCOVA model using the GLM procedure. Several indicators of household socioeconomic status relating to quality of house construction and household material possessions were measured in 1975 and included in a factor analysis (see Rivera et al. 1995) to create a general socioeconomic index. The resulting factor score (SES) was evaluated as a possible confounder in all analyses. Statistical interactions between supplementation group and village size were tested also.

Descriptive statistics of biological maturation measures for the study sample are presented in Table 1. For comparison, both the 20-bone and RUS SA are reported. The RUS ages are somewhat greater and more variable than the 20-bone ages; however, the differences are not statistically significant (paired t test). Deviation of the RUS SA from CA suggests a significant (P<0.001) delay in skeletal maturity in the younger cohort of males of 1.20 y, with a lesser delay (P>0.05) of 0.16 y in older males, and no significant delay in females from Cohort 1.

Age-adjusted mean and SE for the difference between SA and CA (SA deviation) are presented for each sex and cohort for the Atole and Fresco groups in Figure 1. The results of regression analysis that support this figure are seen in Table 2. The Atole-Fresco differences were tested after controlling for age and village size (large vs. small). Among males, there are no significant Atole-Fresco differences in SA deviation for either cohort. Among females from Cohort 1, the expected trend of Atole subjects being more mature than Fresco subjects is statistically significant (Difference between Atole and Fresco means = 0.39 y, t = 2. 13, P = 0.035). 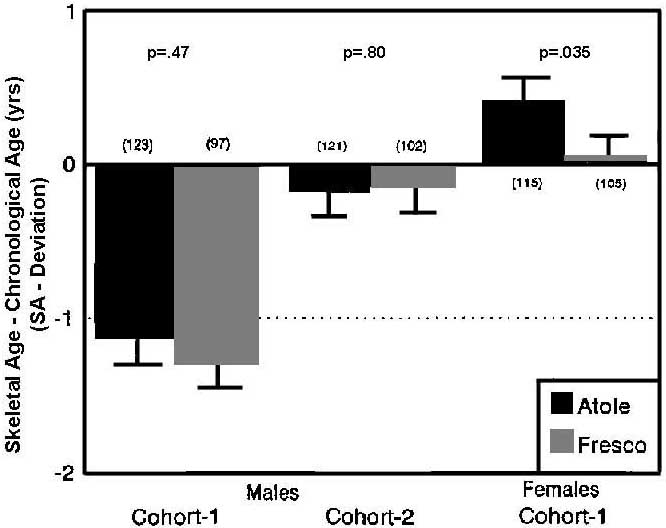 FIGURE 1 Atole and Fresco differences in the deviation of SA from CA among male and female Guatemalan adolescents. Height of the bars represent means after adjusting for age and village size (see Table 2). Brackets represent SE. Sample size for each sample in parenthesis. P values are for test of Atole-Fresco differences in SA deviation on a twosided test after controlling for age and village size.

The analysis was expanded to include socioeconomic status (SES) as a potential confounder of the supplementation effect on SA deviation. Cohort 1 boys and girls from Atole villages had a tendency towards higher SES scores (i.e., higher socioeconomic status) than their age mates from Fresco villages (P<0.10). Moreover, SES scores tended to be associated positively with SA deviation (P<0. 10), thus fulfilling the two criteria for confounding. When SES was entered as a covariate into the basic models for Cohort l presented in Table 2, the Atole-Fresco main effects were not changed for males but were reduced slightly from 0.39 to 0.33 y for females, with the statistical significance changing from P = 0.035 to 0.096. In Cohort males the SES scores were similar in Atole and Fresco subjects and tended to be related to the SA deviation (P = 0.065). Inclusion of SES in the models for this older male cohort did not affect the Atole-Fresco differences reported in Table 2.

The interaction between village size and supplementation was tested for each sex and cohort group with SES also included in the models. Table 3 summarizes the results of the regression analysis that includes this interaction. Atole exposure was associated with earlier maturation only in the larger villages. The interaction was statistically significant for females in Cohort 1 and males in Cohort 2. Among Cohort 1 females, who also had the only significant main effect (Table 2) of supplement, Atole subjects were 0.94 y more advanced than the Fresco subjects in the large villages but were 0.39 y behind in the small villages.

TABLE 3 Summary of regression analysis of supplementation effects on SA deviation by cohort, sex and village size controlling for age and SES¹

3 To obtain kilojoules multiply kilocalories by 4.184.

It is important to note that the sample sizes reported in Tables l and 2 are reduced by ~ l 0% for any analysis that includes SES (Tables 3 and 4) because of missing values. The descriptive statistics reported in Table l are essentially the same when repeated on the reduced sample of subjects with SES data.