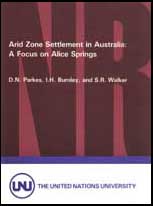 The geographical and ecological settings and the functions of Alice Springs have been outlined: a remote, arid zone urban node of some 18,000 people in 1981, experiencing population growth; a transport and communications, administrative and social service centre serving a region which is a significant fraction of the size of western Europe, but one which is sparsely populated; a town which in morphology and residential structure in many respects resembles that of "suburbia" in Australia's larger cities; a town in which there is affluence and yet which supports fringe Aboriginal settlements and encampments whose living conditions are more comparable to third world environments of underprivilege.

Alice Springs has become par excellence a migration town. Two types of internal migration have affected the growth and demographic structure of the town and its settlement characteristics. The first is Aboriginal migration to the fringe camps, hostels, and public housing areas of the town. The second is the much more voluminous migration of Europeans from interstate. There is also international migration from Britain, north-west Europe, New Zealand, and the United States. All three types of migration involve degrees of transience.

To understand this migration, some reference to modern migration theory is useful. The "mobility transition" theory of Zelinsky illustrates the normalcy of mobility in modernized societies, and, by integrating notions of social isolation and detachment from collective life derived from the earlier writings of Durkheim (1921) and others, fits modern day urbanization and migration into a sequential system. NonAboriginal migration to Alice Springs is essentially an urban to urban phenomenon. The normalcy of migration-its natural place in the career paths and life cycles of persons-can mean population turnover and lack of permanence of settlement, modified by the particular economic and social opportunities in a particular centre. If there is an inadequate service structure and social organizational deficiency in the town of destination, social problems and dissatisfaction may result, leading to further population turnover and dissatisfaction and an associated lack of participation in communal and civic activities.

In assessing the migratory composition, motivation for migration to Alice Springs, and satisfaction and dissatisfaction with conditions there, some of these issues are examined. While the findings may appear to have mainly Australian significance, they may also have contemporary parallels in the south-western United States, and some implications for the future in more modernized economies in other parts of the arid zones of the world where remoteness is a factor.

Census birthplace statistics indicate that over 70 per cent of the Alice Springs population was born in a state other than the Northern Territory. In the sample survey of 393 adult persons undertaken in August 1980 only 7 per cent of those interviewed were born in the Northern Territory, as table 5.1 indicates. Twenty-one per cent were born overseas, which is a similar proportion to that in the nation as a whole, although the ethnic composition differed, with the presence of a large American community.

Among the sources of migrants from within Australia, South Australia stands out with a disproportionately large number, 120 or 30 per cent of the sample; this is supported by the pattern shown in figure 4.2 from Parkes' survey in February 1980. Three quarters of these were from Adelaide, although the number from country districts of the state was much higher than from equivalent areas of other states. Relative accessibility-a two- to four-day drive or a two-hour flight by jet from Adelaide-was influential. However, Adelaide in the past has acted as the capital for the Northern Territory, especially in the disbursement of welfare services and administration, and particularly for the southern half of the Territory (Gale 1974). Increasingly, however, Alice Springs has been developing its independent status as a regional administrative centre for the southern portion of the Northern Territory, as the Territory moves towards statehood.

A quarter of the sampled population had migrated from the south-eastern states of Victoria and New South Wales, and comparatively few from Queensland and Western Australia. It should be noted that the 93 per cent of the sample survey who were born outside the Territory were lifetime internal migrants. Some had been in Alice Springs a considerable time.

Nevertheless, table 5.1 also shows that the sampled population was a relatively youthful one with a small proportion over age 60, a feature also indicated by the census statistics and the surveys reported by Parkes in chapter 4 and Walker in the following chapter. The youthfulness of the migratory population is characteristic of migratory populations in general. At the same time, informal comments on the part of middle-aged persons in the sample and also some community leaders suggested that the prospects for retirement in the town were not favourable, partly due to the lack of services and also because of separation from family.

TABLE 5.2. Duration of Residence in Alice Springs by Age of Sample

Table 5.2 shows the relationship between duration of residence and age composition of the Alice Springs population. The duration of residence composition, especially for the one to four years residence groups, reflects the strong inflow that occurred between 1976 and 1979 as recorded in the 1979 population count. As expected, a higher proportion of long-term residents were in the older age groups. What is interesting, however, is that a significant proportion of longer term residents were under age 30, implying an earlier migration of school children as part of family groups.

Persons were asked the main reason for migrating to Alice Springs. As with most of the survey findings discussed in this chapter, the question was open-ended and the categories of response were devised afterwards. Not unexpectedly, job-related responses were important (table 5.3). Altogether, 65 per cent of the men gave as their reasons better income, a job opportunity, or a job transfer by their company or by the government (Commonwealth or Northern Territory) employing them. Indeed, for 32 per cent of the men, the job transfer meant that their migration was not entirely one of free choice.

TABLE 5.3. Reasons for Moving to Alice Springs from Interstate

TABLE 5.4. What Persons Liked Most About Living in Alice Springs: Frequencies of Responses

Many person being transferred or migrating for promotion within large organizations have been termed "spiralists." These persons in aggregate become a type of career transient migration (Watson 1964, p.147). Such persons are in the "socially, economically and geographically mobile national categories who move upwards through bureaucratic hierarchies and outwards through the communities to which their organizations send them." This is a common type of migration to country towns of some size in Australia (Burnley 1980; Montague 1980). It implies a transient pattern of settlement-many will move on with further career progression, and they may not put down permanent roots in the community to which they move.

Residents of Alice Springs were asked to give only their main reason for migration but a number gave two reasons, and a preference for small town life was also mentioned along with the economic reason. This also emerged with a number of women, the largest female category (38 per cent) who also stated that they migrated because of their husband's job decision. The life-style factor, unexpected by the author, also emerges in a number of other questions discussed below. This author found, however, in a recent study of migration into Bathurst-Orange in the central-west of New South Wales that there was a circulatory pattern of transient migration between country towns but one which was distinct from the "career spiralist" type of movement discussed above (Burnley 1980). This movement was one of people in white collar, small business, or manual occupations who preferred small towns and also preferred to be on the move. Transience in itself had become a lifestyle, and it appears that some of this kind of movement has been present in Alice Springs.

TABLE 5.5. What Persons Disliked Most About Living in Alice Springs: Frequencies of Responses

Again on an open-ended basis, sampled subjects were asked what they liked most about living in the town. The results are shown by age groups of respondents in tables 5.4 and 5.5. These results compare well with those outlined in tables 4.2 and 4.3 from the surveys by Parkes in 1980 and 1981. As some persons gave more than one response to these questions, the responses are categorized in the tables in terms of frequencies of responses rather than of persons interviewed. Persons were not asked to state whether their likes or dislikes were stronger. However, the number of responses that favoured Alice Springs as a place to live (655) outnumbered the number of unfavourable responses (513) and this was the case with each age group.

The most important feature liked about Alice Springs, which accounted for 23 per cent of the positive preferences, was "country life-style." This proportion is even greater if the response "small town size" is included. Climate was the next most important positive response, and again this "environmental" response is increased to 30 per cent if "good environment" is also included. Community living, community spirit, friendly people, and youthful population were also collectively of importance.

Good income and job opportunities were not stressed to any great extent once persons were in the town. After migration, environmental, life-style, and communal features assumed more importance. Among older persons, climate assumed more importance. It is interesting that housing rated barely a mention, a factor also noted by Parkes in chapter 4. The findings on the positive aspects of living in Alice Springs do suggest that, while economic and occupational factors have been very influential in inducing migration to Alice Springs, a selectivity may be occurring, wherein persons preferring a non-metropolitan urban environment and its surrounding amenities are taking opportunities to live in geographically remote areas.

TABLE 5.6. Place of Residence of Dearest Relatives Outside Nuclear Family by Age of Respondent

Among the reasons for disliking Alice Springs, again using an open-ended question method, four sets of problems seemed to dominate. The most important were issues relating to the Aboriginal population-133 responses or 24 per cent of the responses. The "presence of Aboriginals," some 54 responses, was very much a response of resent ment, as were those responses that emphasized racial tension. However, another set of responses that was concerned with issues relating to Aboriginal people, such as drinking, poor housing, and health, nevertheless showed more sympathy with their conditions. A considerable degree of prejudice and resentment against Aboriginal people was expressed by a significant minority of respondents. The other main dislikes centred on services (particularly medical facilities, education, entertainment, and especially the lack of cheap rental housing, see table 5.5) and the cost of living related to the price of food and comsumer durables, which need to be imported over great distances.

Remoteness, with associated high travelling expenses, accounted for 19 per cent of responses. There were fewer grievances concerned with cleanliness and sanitary problems as well as urban deterioration; some persons when probed brought in allusions to Aboriginal people, others to shanty housing, and others again to the town's growth beyond an ideal size.

It will be shown below that while the majority of Alice Springs residents-"immigrants" as they were-appeared to be making a satisfactory adjustment to the environment, there was a sufficient residue of dissatisfaction to warrant further improvements in the area of housing and services.