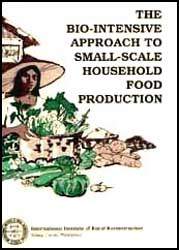 A food-secure household with adequate dietary intake and reduced disease is likely to be adequately nourished. Gardens can make a very significant contribution with regard to iron, vitamin A, vitamin C, vegetable protein, fiber and, to a lesser extent, calories. Especially with the very poor, it is important to use a low-external input form of agriculture because these products are likely to be consumed at home. Moreover, food grown in this manner is safer to eat because it is chemical-free. Outputs of 14 pounds/day of vegetables from a 50 sq m area are easily obtained.

Given limited natural sources of fertilizers or compost, it makes sense to allocate whatever small quantities of biomass or nutrients available to a limited area - such as that found in backyards thereby maximizing outputs. Vegetable prices today are higher than at any point in agricultural history and intake among the poor is affected. This is so partly because today, vegetable production is mostly restricted to specialized commercial ventures. The deteriorating condition (from degradation and desertification) of small and large farms is expected to further limit the availability of reasonably priced vegetables to the poor majority. The use of chemicals in vegetables is already at an all-time high. Given the ecological imbalances from pesticide overuse or unrestricted use, more rather than fewer chemicals are likely to be used by commercial growers. Family food gardens will have to be given serious attention by research and development agencies.

Here are some lessons derived from eight years of IIRR's involvement in home gardening initiatives.

1. A nutrition garden can achieve most of a family's nutrition goals in a sustainable manner if it aims at increasing the overall supply of nutrition-rich vegetables.

In a diversified garden, the family's total intake of vegetables is emphasized rather than its consumption of specific vegetables in specific quantities. The approach to planting certain amounts of specified vegetables, with the assumption that people will eat those vegetables in specified quantities is not realistic. People just aren't going to design their menus to suit recommendations based on a nutritional rationale. Let people choose what they want to but give them a wide selection of choices and urge them to grow a diversity of vegetables (8-12 at least). This way the whole family is likely to obtain the nutritional requirements at least for vitamins A and C, iron and fiber. Also, when diversity is emphasized, it is not necessary to deemphasize culturally popular vegetables such as eggplants or cucumbers that are supposedly low in nutritional value. By increasing the overall access to a diversity of vegetables, one can achieve the nutritional objectives in a more sustainable manner.

Moreover, several unconventional, neglected plant species are not typically included as a garden crop or are danger of vanishing: purple yam, potato yam, Colocasia, cassava, sweet potato, arrowroot, etc. Grain legumes (legumes eaten in dry form) such as sword beans, jackbeans, lima beans and hyacinth beans are all rich in carbohydrates. Finally, seeds of gourds such as pumpkin and watermelon, usually eaten as a snack, are rich calorie sources.

3. Incorporate the best of the indigenous knowledge available in the area.

Almost every culture, with the possible exception of pastoralists and forest dwellers, has engaged in some form of gardening or backyard mixed-tree orchards, primarily to meet household needs of food, fodder and fuel. Local people have a rich resource of knowledge, which can readily be integrated into gardening programs. The vertical use of space is maximized in traditional backyards, such as those found in the Philippines and Indonesia. A great diversity of plants, usually exceeding 3 dozen, are raised in these complex backyard ecosystems. The local selections are usually hardy and shade-tolerant and have been handed down through the generations. Special skills and knowledge in the area of varietal selection, planting time or planting calendars, seed storage and crop combinations have been passed on for generations. Unfortunately, introduced garden interventions based on dramatical new technologies dependent on external material inputs, hybrid seeds and new methods of pest control, provide little role for indigenous garden technology concepts. This knowledge, thus, becomes dysfunctional. However, if incorporated into gardening activities, this knowledge could make such programs more sustainable.

4. Input provision should be limited to the initial supply of seeds (for purposes of increasing garden diversity) and on a case-by-case basis to the provision of community wells and community borrowing centers for tools.

The biggest investment is for training, information, education and communication (IEC) materials, monitoring and follow-up and not for material inputs. Only in the case of community gardens should wells or borrowing-centers for tools be considered. The adoption of the gardening technology must be based on its own inherent merits and not be influenced by the distribution of material inputs (fertilizers, pesticides and garden tools). Garden programs are often driven and sustained by the constant supply and promises of material inputs. Thus, one does not know what is really motivating the individual to adopt: the material inputs or an appreciation for nutrition gardening itself.

5. Seasonal employment and waye-earning opportunities often conflict with gardening activities, and this results in temporary neglect of gardens.

The time devoted to gardens is often affected by opportunities for earning wages. When the harvest period or the sugarcane milling season starts, the opportunities for earning wages usually are high. Even school children are often kept away from school in order to maximize such opportunities to earn hard and quick cash. Naturally, a garden program is neglected. Very little can be done other than ensure that at least a minimal level of garden maintenance is undertaken. Program administrators must recognize this factor and work around these situations.

6. The sale of garden produce can result in sustained interest by the gardener in the introduced technology/intervention.

This is true if the diversity concept (10-12 kinds of vegetables) is maintained and the sale of vegetables usually does not exceed 30% of the total garden output. If the sale is local and is made to people in the same socioeconomic bracket, the sale of vegetables cannot be considered as going against the nutrition objectives. In fact, where small amounts of money are earned on a regular basis from gardens, such activities are likely to be sustained longer.

7. Introducing the concept of the community garden promoter or indigenous specialist can lead to increased sustainability.

Some of the more successful garden programs have been associated with an increased role for participating gardeners themselves, in the further promotion and monitoring of the garden program. In the initial 12-18 months, the outside technician plays a major role, especially in introducing the technological options and related training and retraining. Subsequently, the program increasingly relies on selected individuals from among practicing gardeners to assist in subsequent training as resource persons, to monitor and to provide on-site assistance. These indigenous specialists individuals can be termed as "community garden promoters".

Usually after having served voluntarily for at least a year in garden promotion, they may receive some form of remuneration for the days they spend in training or conducting follow-up visits. This remuneration is justified as a means of allowing them to hire a replacement for the farm or as compensation for lost wage-labor earning opportunities. Another approach is to provide them with an income-generating project to compensate them for the time contributed to community service. Volunteerism from poor people is realistic only if the time required from them is minimal, e.g., assistance during an immunization campaign or for once-weekly assistance in cooking a meal at the daycare center. However, in agriculture and gardening, a substantial amount of time needs to be devoted by the indigenous specialist.

8. Community gardens in urban centers and in centralized/consolidated villages offer the best opportunity for systematic exploitation of the potential for garden interventions.

Many backyards are already fairly well planted exploited with trees and usually are too shady for annual vegetables. Gardens do not yield outputs commensurate with the effort invested under such circumstances. Vacant lands, such as public lands or that donated by a philanthropist, can be used for such gardens. Community gardens are contiguous blocks of lands allocated to a group (mothers, families, urban poor, farm workers), who are then given subdivided portions of the land, say 100 200 sq m, to manage on an individual or single-family basis. The sponsoring group might then be able to assist-by providing training, fencing, water supply and maybe a community tool-loan facility - but preferably nothing more.

It must be noted that this differs from the communal gardening approach, where no land area delineation is made for each family, i. e., everyone works communally in the entire area The sustainability of commune gardens has been poor unless it is associated with "giveaways". In such situations people just continue to stay together, giving the semblance that the concept of communal gardening is valid and working until the give-aways are withdrawn.

9. Gardens - and not the numbers of training conducted - are measures of success.

All too often, the numbers of trainings conducted or the number of training materials produced and distributed are used as the measure of accomplishment. These are only measures of accomplishment of an intermediary objective. The only real measure of initial success is the number of trainees who have started gardening or have improved their previous efforts. The measure of final success is that of gardens being sustained without any outside material input assistance. The preoccupation with targets and conduct of training and echo-training and a corresponding neglect of field-level follow-up of trained gardeners is fairly serious in garden programs. Visitors are usually taken to a few well-maintained and extraordinary efforts, especially those by the roadside and within reach of donors and agency officials. There is a need to establish very clearly that the conduct of training itself is not indicative of the job having been accomplished.

10. The key to successful wide-scale adoption is being flexible on the technology and permitting gardeners to adapt further and modify the introduced technologies.

In initial training, a range of technological options are provided and gardeners are encouraged to adopt and adapt those ideas that make sense to them. They mix and match ideas based on their own rationale and after considering their own resource base (of time, available materials, family labor, etc.). The result of such an approach is a great diversity of garden designs. It does not make sense for project holders to be fixated on the technology itself. What is important is that the people involved in the garden program raise more vegetables than they used to in the past.