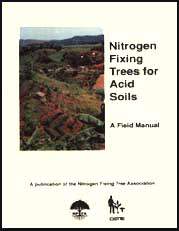 Livestock owners maintain nitrogen fixing trees in pastures and fodder banks and use them as living fence posts. The trees provide a variety of products and services, such as fuelwood, poles and timber, fodder and protein supplements for livestock, and shade. Although only a limited number of nitrogen fixing species are known to be adapted to acid soils, this group includes species suitable for a wide range of ecological zones and animal production systems. Among the species that have proven particularly successful for animal production on acid soils are Erythrina poeppigiana, Erythrina fusca, Alnus acuminata, Cratylia argentea, Desmodium velutinum, and Desmodium gyroides. Table 1 gives a more complete list of nitrogen fixing trees and shrubs for animal production on acid soils.

Animal production systems that combine trees or shrubs with pastures are called silvopastoral systems. Farmers use nitrogen fixing trees in these systems to help achieve sustainable production. The trees interact with other elements of the system at biological, ecological and/or economic levels.

Pasture improvement. Nitrogen fixing trees can improve the soil chemistry of pastures by supplying nitrogen-rich organic matter. Tree roots absorb nutrients from deep soil layers and bring them to the surface, making them available to other pasture plants through the periodic decay of leaves, flowers, fruits, branches, and roots. In addition to providing nitrogen, nitrogen fixing trees can influence soil pH and the content and availability of calcium, magnesium, potassium, and phosphorus.

Grazing animals can deplete pasture plants and trample and compact the soil. In the humid tropics, pastures all too often become so degraded that they are eventually abandoned. Nitrogen fixing trees can improve soil physical properties, such as porosity and bulk density, and increase soil nutrient availability. Such positive effects can halt or even reverse the process of pasture degradation.

The interactions between trees and pasture grasses and other plants can be complex. Trees may compete with other pasture plants for water, nutrients, light, and space. The effects of such competition will be greater if the requirements of the trees and other plants are similar. These effects can be reduced through the selection of appropriate tree species and a pruning system designed to increase the availability of water, light, and nutrients to other plants at important times in the growing season.

Nitrogen fixing trees can also enhance the growth of adjacent pasture species by improving the soil and providing light shade. At the Centro Agron¢mico de Investigaci¢n y Ense¤anza (CATIE) in Turrialba, Costa Rica, Erythrina poeppigiana was interplanted with pasture grasses at a spacing of 6 x 6 m (277 trees/ha), and the trees were pruned every three to six months. Four grass species had higher yields and higher crude protein contents when interplanted with the trees than when planted in pure stands. These were Panicum maximum, Brachiaria brizantha, Brachiara humidicoia, and Cynodon nlemfuensis. Yields of two other grass species, Brachiaria dictyoneura and Pennisetum purpureum, decreased when interplanted with Erythrina.

Generally, grass species that grow under trees have higher yields, lower root: shoot ratios, and a better nutrient composition (lower crude fiber and higher crude protein content) than species that grow outside the tree canopy. However, the shade-seeking behavior of grazing animals may also affect pasture quality. Large numbers of animals crowded under trees can lead to trampling that affects plant cover and causes soil erosion and compacting. These conditions can also inhibit tree growth.

The feeding preferences of animals can have adverse effects on pasture composition. Over time, the species that grazing animals reject may come to dominate a pasture. On the other hand, livestock can have positive effects on pasture quality. They can accelerate some aspects of nutrient cycling by returning manure and urine to the soil. In addition, animals can spread seeds, or scarify them, which favors germination.

Benefits to Livestock. In addition to improving pasture conditions, nitrogen fixing trees can provide a valuable feed supplement to cattle and other livestock. A recent study at the International Center of Tropical Agriculture (CIAT) in Colombia evaluated the forage quality of several shrub legume species planted in acid soils (pH 4.0-4.5 and aluminum saturation higher than 85 percent). The leaves of nitrogen fixing species that are low in tannins, such as Cratylia argentea and Desmodium velutinum, had medium to high in vitro dry-matter digestibility and high crude protein throughout the year. Consumption by sheep and cattle was greatest when leaves were partially dried and fed as a cut-and carry protein supplement. The study especially recommended C argentea as a dry-season supplement.

Species that are high in tannins, such as Flemingia macrophylla and Desmodium gyroides, had adequate crude protein but low digestibility. Cattle did not consume these species in large amounts, but consumption was improved to some extent by drying leaves and young branches for at least one day and feeding them as a cut-and-carry protein supplement. Table 2 gives the nutritive values of several nitrogen fixing tree species that are tolerant of acid soils.

In another experiment in Colombia, the nitrogen fixing tree species Erythrina fusca was interplanted with the pasture grass Cynodon nlemfuensis at spacings of 4 x 4 m and 3 x 3 m (625 and 1,111 trees/ha, respectively). Trees pruned every three months yielded 30 and 50 tons/ ha/year of green forage, enough to provide protein supplementation for 8 to 13 cows.

Farmers in Costa Rica have grown Alnus acuminata in pastures for more than 90 years to produce timber, fuelwood, and shade. Trees are regenerated naturally or planted from nursery stock at spacings of 8 to 14 m (about 100 trees/ha). Farmers report that cows maintained on pastures with A. acuminata yield more milk than cows on pastures without the trees. To protect young seedlings from grazing cattle, farmers sometimes construct crude fences around individual seedlings.

In addition to providing high-protein fodder supplements, trees provide shade that protects grazing animals from direct radiation and internal temperature stress. The intensity of the shade depends on the spacing of the trees and on their crown diameter and structure. Research has shown that animal consumption levels are affected by thermal balance-animals eat more when the air temperature is lower than their body temperature. Researchers do not agree on whether this contributes to higher animal productivity in the tropics.

· Nitrogen fixing trees in pastures can improve soil properties and produce forage and fodder that provide a protein supplement for livestock.

· Trees provide shade and shelter from rain and wind, and this can help boost livestock production.

· Farmers may obtain additional economic benefits from the production of fuelwood, timber, posts, and other tree products.

· Diversification of production activities within the farm reduces economic risk.

One of the main disadvantages of silvepastoral systems is the general lack of knowledge and trained personnel to carry out research and improvement projects. Formal experimentation with silvopastoral combinations is complex, both scientifically and from a practical point of view, and trials require a long-tenn commitment. From a farmer's perspective, maintaining trees in pastures may have other disadvantages:

· Tree cover, particularly if it is dense, can have negative effects on adjacent plants.

· Young trees must be protected from grazing livestock.

· Farmers wishing to introduce nitrogen fixing trees in pastures may not have access to suitable planting material.

To maximize foliage production, some nitrogen fixing trees, such as Gliricidia septum and various Erythrina species, can be planted in dense stands in pastures or near pens for cut-and carry feeding to livestock. For fodder banks, Erythrina species should be planted at a spacing of 1.0 x 0.5 m and allowed to grow to a height of 1.5 to 2.0 m before the first pruning. Trees should be pruned to a height of 30 to 50 cm every four months during periods of high rainfall and less frequently during dry periods. In the humid tropics, a 1-ha fodder bank of Erythrina poeppigiana or Erythrina berteroana, pruned every four months, can produce up to 30 t of edible dry matter a year - enough to provide protein supplementation for about 20 cows.

Gliricidia septum can be seeded directly or planted from cuttings at a spacing of 1.0 x 0 25 m Trees should be well established and allowed to grow from 10 to 20 months before harvesting begins. They can then be harvested every 8 to 12 weeks, depending on site conditions. They should be cut to a height of 40 to 90 cm and allowed to regrow to a height of 1 to 2 m before recutting. To ensure an adequate supply of fodder during the dry season, trees should be cut six to eight weeks before the onset of the dry season.

Hedges and living fence posts provide fine, conspicuous boundaries around pastures. They may also serve as windbreaks, niches for insect-eating birds, support for climbing plants, and shade and forage for livestock. In addition, they shed leaves that provide mulch and release nutrients to adjacent pasture grasses.

Farmers in Central America use a number of nitrogen fixing species that are tolerant of acid soils for hedges and living fence posts. These include Erythrina berteroana, Erythrina costancensis, Erythrina fusca, and Gliricidia sepium. Fence posts are usually propagated from stakes 2.0 to 25 m long, taken from trees that are at least 12 months old. They are generally planted 1 to 2 m apart. Well-established fence posts can provide stakes for new fence posts, which farmers can use themselves or sell for extra income.

For Erythrina species, the main management requirements are regular pruning and replacing posts that die. The recommended practice is to prune fence posts once a year, during the dry season, if the objective is to produce woody stems rather than leafy biomass. Two prunings per year are recommended to produce palatable leaves and sterns for livestock fodder.

Gliricidia septum is probably the most extensively used species for living fence posts in the American tropics. It yields a dense wood that is well suited for construction poles and fuel. It also produces nutritious fodder. At one site in the Atlantic lowlands of Costa Rica, 1 km of fencing with posts spaced about 13 m apart yielded more than 1000 kg (dry matter) of leaves suitable for livestock fodder. After pruning, Gliricidia resprouts rapidly, producing branches that may be used as cuttings to establish new fence posts.