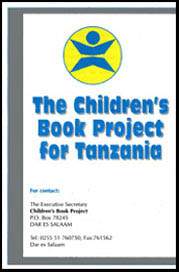 The Children’s Book Project for Tanzania was started in 1991 as a response to the acute shortage of books in the country-especially books for children.

The Project is supported by International donor organizations with interest in education and books. They are CODE (the initiator of the project), DANIDA, THE NETHERLANDS GOVERNMENT, CANADA FUND, SIDA and the AGA KHAN FOUNDATION.

2. Objectives of the Project

° In collaboration with publishers, to produce children’s books in Kiswahili so as to improve children’s reading ability.

3. Targets of the Project

The project’s first five year plan had two main targets. They were:-

To produce a total of 220 titles of children’s books. The project purchased 3000 copies of each title produced under it. These were distributed to rural libraries, a few primary schools, teachers’ centres and some kindergartens. This purchase helped to strengthen those involved in the production of the book, i.e. the author, illustrator, publisher, printer and the book seller.

The Project organizes training courses, workshops and seminars for people in the book industry with the objective of improving their skills. It has organized courses, for writers, illustrators, publishers, editors and booksellers.

° During the second phase of the Project there will be one additional activity i.e. Readership campaign among children. The activity will be undertaken in collaboration with the librarians Association.

During the first phase the Project received manuscripts from publishers. The Children’s Book Committee examined the manuscripts and selected those suitable for publication under CBP. The publisher got the approval of the Project Executive Secretary to print the book. The publisher was required to print a minimum of 5000 copies out of which he/she sold 3000 to the project and 2000 to bookshops.

During the second phase publishers are required to submit CRC’s or books. For the tittles which get approval of CBC publishers are supposed to produce 7500 for each tittle. 5000 copies are purchased by the project and the rest sold to the open market. The project distributes the books to six primary schools in each district throughout Tanzania.

° The CBP Board of Directors

The CBP Board of Directors is made up of representatives from the major book sub-sectors. The Board is an overall incharge of the Project and is responsible to the CBP stakeholders. The Board meet four times per year.

The current members of the CBP Board are:

This is a committee of six people whose main function during the first phase was to select manuscripts, but now to select either CRC’s or books for publication under the project. They also deliberate on the overall running of the project.

The current members of the CBC are:-

The day to day running of the project is done by the Executive Secretary.

6. What has been achieved so far

One hundred and thirty (130) titles of children’s books have been produced until July, 1998 and there are several titles approved by the CBC that are going through the publication stages.

The Project has organized and run 32 training courses/workshops in book writing, editing, publishing, illustrating, bookselling and DeskTop publishing. CBP has also organised attachments for illustrators in Kenya and Zimbabwe.

The Project has participated in book fairs in Zimbabwe, Kenya and Bologna, Italy.

The project has done several other activities with close collaboration with publishers and their association, PATA such as:

* Book News is the projects newsletter which comes out on a quarterly basis.

* Has started a reference library at the project office for publishers, writers, editors, etc.

* Has initiated a children’s magazine which went into circulation at the end of 1994.

Books are divided into three main levels based on the children’s ages: