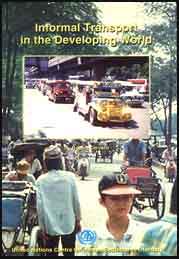 Metropolitan Bangkok, with a population of some 6 million inhabitants, has the unenviable reputation as one of the world’s most gridlocked cities. Indeed, during parts of the day, traffic congestion seems pandemic. At the most basic level, traffic congestion has worsened because rapid motorization has not been matched by increased road supply. During the 1990s, vehicle population increased 15 percent annually, while road surface area rose just 1.2 percent a year.1 A recent survey revealed that Bangkok averages the highest automobile ownership rate of any Asian city - over 200 vehicles per 1,000 residents, in part because the central government sharply reduced vehicle import duties in the early 1990s.2

The consequence of rapid motorization and limited road capacity has been near-paralysis - according to one estimate, 3 million person-hours are lost each day in the metropolitan region because of average traffic delays of two to three hours.3 In the historical core, traffic crawls at below 8 kilometers per hour during daylight hours, slower than a brisk walk. One study estimated that Bangkok loses about a third of its potential gross city product because of traffic congestion.4 Some fear the city is losing its competitive edge, both domestically and from abroad. Shipment delays due to traffic jams have driven up the cost of local goods and prodded many multi-national corporations to leave for less congested cities.

The poor quality and connectivity of roads in metropolitan Bangkok have provided a natural breeding ground for paratransit development. Much of Bangkok’s growth has been piecemeal and minimally planned, resulting in a disconnected and seemingly random pattern of roadways. Branching off of main thoroughfares are dead-end local streets, called sois producing a fishbone configuration of passageways (Map 4.1). Bangkok’s dynamic paratransit sector, and the many illegal operators that exist within it, have stepped in to provide some of the diversity and carrying-capacity efficiencies that the road network lacks. In ways, Bangkok’s rich offering of paratransit modes has helped to compensate for the lack of road hierarchy and connectivity.

As is often the case, paratransit modes have also compensated for unsatisfactory and substandard bus services. Bangkok’s public buses often get stuck in traffic jams despite the presence of exclusive bus lanes on several main arteries. Long waits for buses are common and quite often commuters are unable to board overcrowded vehicles during peak hours. Paratransit services have provided much-needed supplemental capacity while also diversifying the service-price options available to the riding public.