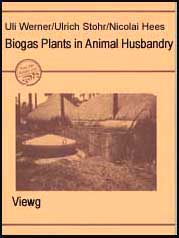 The generation of biogas by organic conversion (anaerobic fermentation) is a natural biological process that occurs in swamps, in fermenting biomass and in intestinal tracts, particularly those of ruminants.

The symbiotic relationships existing between a wide variety of microorganisms leads, under air exclusion, to the degradation and mineralization of complex biomass in a sequence of intermeshing stages. The resultant biogas, consisting primarily of methane (CH4) and carbon dioxide (CO2) and the mineralized slurry constitute the ultimate catabolites of the participating bacteria and residual substances.

The process of anaerobic fermentation can be illustrated in the form of a three-stage model, as shown in figure 5.1.

Anaerobic fermentation converts the "volatile solids" (proteins, carbohydrates, fats). The "nonvolatile solids" are essential to the bacteria as "roughage" and minerals. Water serves simultaneously as the vital medium, solvent and transport vehicle.

Theoretical/laboratory data on maximum gas yields from various organic materials show that anaerobic fermentation is just as capable of achieving complete mineralization as is the process of aerobic fermentation. Note: The theoretical maximum biogas yield can be ascertained by way of the basic composition of the biomass.

It is important to know that anaerobic fermentation involves a steady-state flux of acetobacters and methanobacters, with the methanobacters, being more specialized and, hence, more sensitive, constituting the defining element. Any biogas plant can develop problems during the starting phase and in the case of overloading or uneven loading of the digester, and as a result of poisoning. This underlines the importance of cattle dung, which is rich in methanobacters and therefore serves as a good "starter" and "therapeutic instrument" in case of a disturbance.

Parameters and terminology of biomethanation

Feedstock/substrate:
As a rule, all watery types of biomass such as animal and human excrements, plants and organic wastewater are suitable for use in generating biogas. Wood and woody substances are generally unsuitable.

The total-solids and water contents vary widely from substrate to substrate (cf. table 3.2 for empirical values). The most advantageous TS for the digester of a continuoustype biogas plant is 5-10%, compared to as much as 25% for a batch-operated plant. A TS of 15% or more tends to inhibit metabolism. Consequently, most substrates are diluted with water before being fed into the digester.

Substrate composition
All natural substrates may be assumed to have a nutritive composition that is adequately conducive to fermentation. Fresh green plants and agroindustrial wastewater, however, sometimes display a nutritive imbalance.

An important operating parameter is the ratio between carbon content (C) and nitrogen content (N), i.e. the C/N-ratio, which is considered favorable within the range 30 :1 to 10: 1. A C/N-ratio of less than 8: 1 inhibits bacterial activity due to an excessive ammonia content.

For reasons of operating economy, a somewhat shorter period of fermentation, the technical retention time (RT, t, measured in days) is selected such as to achieve an advantageous, temperature-dependent relative digestion rate (Dr, measured in Yo), also referred to as the yield ratio, since it defines the ratio between the actual biogas yield and the theoretical maximum. The average agricultural biogas system reaches a Dr-value of 30-60%..

The volumetric charge, i.e. how much substrate is added per unit of digester volume each day (Vc, measured in m³/m³ Vd x d), is given by the chosen (technical) retention time (RT).

The digester load (Ld, measured in kg digested TS (VS)/m³ Vd x day) serves as a measure of digester efficiency. The digester load is primarily dependent on four factors: substrate, temperature, volumetric burden and type of plant. For a typical agricultural biogas plant of simple design, the upper limit for Ld is situated at roughly 1.5 kg VS/m³ x day. Excessive digester loading can lead to plant disturbances, e.g. a lower pH. In practice, the amount of TS/VS being added is frequently equated to the digester load.

The specific gas yield (Gy, measured in m³ gas/kg TS (VS)) tells how much biogas can be drawn from a certain amount of biomass (cf. table 3.5 for empirical values). The rate of gas generation is naturally dependent on the digester temperature and retention time (cf. fig. 5.2).

The pH is the central parameter of the biochemical bacterial environment.