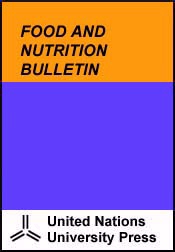 The articles in this issue discuss a household-level food production strategy which is as old as human civilization and plant domestication itself: the household garden. Shown to have been of crucial importance to a large proportion of the population in recent world history [3], the home garden still has a promising future in the struggle against world hunger and malnutrition as one of the "last frontiers" for increasing world food production.

This collection of original essays on small-scale food production for home consumption is the first of its kind. Food production in and around the household is the most ancient form of cultivation. Despite mounting evidence that backyard gardens yield surprisingly significant nutritional and economic benefits to gardening households and societies, they have been ignored as a legitimate area of research. Understanding the present state-of-the-art of garden research may be a key to elevating the household gardening food strategy to its rightful place in the study and improvement of agricultural systems.

The reader may find it of interest that, in putting together this issue, I sent requests to researchers in many development-related professions. It soon became apparent that serious field study of home gardens is in its infancy. Most individuals who expressed interest in submitting papers reporting empirical field data on existing household production systems were anthropologists or geographers, who came to realize the importance of the traditional garden production system through prolonged observation of village life.

Generally, the first phase in the scientific study of a newly discovered phenomenon is description. All the papers in this issue are case-studies based on first-hand, in-depth research by the authors. They deal with gardening systems and people from four major continents: Latin America, North America, Asia, and Africa. Despite great diversity in the details of each case, there are certain similarities. Isolating these common elements can take us one step further towards a clearer understanding of the nature, functions, and possibilities of household gardens.

The adaptive functions of household gardens, as illustrated in all the articles in this issue, are:

What is a household garden and how does it differ from field production or market gardening? Ruthenberg [6], one of the few agricultural systems analysts to discuss home gardens, distinguishes:

- garden cropping from . . . arable cropping by the following features which are usually, but by no means in all cases, found simultaneously: (1) ) cropping those plants for personal consumption that cannot be collected nor supplied by arable farming, (2) small plots, (3) proximity to the house, (4) fencing, (5) mixed or dense planting of a great number of annual, semi-permanent, and perennial crops, (6) a high intensity of land use, (7) land cultivation several times a year, (8) permanence of cultivation, and (9) cultivation with hand implements.

The household garden is a subsystem within larger food procurement systems which aims at production of household consumption items either not obtainable, readily available, or affordable through permanent or shifting field agriculture, hunting, gathering, fishing, livestock husbandry, or wage earning. Household gardens supply and supplement subsistence requirements and generate secondary direct or indirect income. They tend to be located close to permanent or semi-permanent dwellings for convenience and security.

In reviewing the cases presented here it should be obvious that societies have different degrees of dependence on the gardening strategy. For example, shifting cultivators with a dietary base of cassava and plantain depend to a much greater degree on their gardens than either peasants of the High Andes, who traditionally grow a wide variety of grain and tuber staples high in micro-nutrients and protein, or groups that have greater access to outside markets or wage labour opportunities. None the less, as the lack of land for growing populations of shifting cultivators becomes more of a problem for development action, and as agriculturalists from different ecosystems move into previously used tropical forests, the search is on for viable strategies.

Food production for direct home consumption is part of rural and urban household economies. Given a choice, families provide themselves with enough space around their dwellings to plant crops and keep animals. The degree and type of use this space is put to depend on the nature and success of other family economic strategies. Again, two basic types (with a variety of subtypes) can be identified: subsistence gardens and budget gardens.

The subsistence garden forms an essential part of subsistence field agricultural economies producing mainly for home consumption. The role of the garden is: (i) to supply, during the productive season, three main categories of daily meal ingredients (condiments, ready-to-hand staples, leaf vegetables, and fruit); (ii) to supply vegetable staples earlier and more conveniently than field agriculture (roots and tubers, maize); (iii) to produce consumption luxuries under close surveillance (e.g. certain fruits and vegetables); (iv) to provide space and fodder for farmyard animals; and (v) to produce small surpluses for sale in the market. The proportion of garden space allocated to various categories of produce depends on the accompanying field production and ecological conditions. The bulk of energy needed by the household comes from field agriculture, with the garden providing nutritional essentials not otherwise obtainable.

Budget gardens exist in rural and urban variants. The rural budget garden is located in a rural setting, serving a family whose main income comes from wage labour (rural or urban). The urban budget garden is generally located in the yard of an urban home, a vacant lot, or an allotment on the periurban fringe. Budget gardens aim to supplement purchased food supplies or, if possible, to replace them with garden staples, vegetables and condiments, and fruit.

These gardens also provide space and/or fodder for the raising of small animals (usually poultry, rodents and small ruminants). In extreme cases, the budget garden may be the only source of livelihood and income for the rural and urban poor. If enough space is available, small cash crops may be produced and exchanged or sold for purchased food.*

The lack of economic and nutritional data on the benefits of household gardens has been a major obstacle to official recognition of the universal phenomenon of family food production. Data collection is difficult for a number of reasons, the main one being that by its very nature production for immediate consumption does not lend itself to measurement by the producer/consumer and therefore rarely appears in government statistics.

To say that gardens produce between 10 and 20 per cent of a family's income, or up to 40 per cent of family consumption needs, may or may not be meaningful depending on the audience, anyone, however, would surely be impressed by the fact that Indonesian home garden production has a monetary value of about 60 per cent of that of the total rice production in the country (see Soemarwoto, p. 45). The very persistence of this form of production, from time immemorial down to the present, can be taken as proof of its intrinsic economic and nutritional merit. The importance of gardens is further attested to by the fact that in times of need societies have had recourse to the garden strategy - for example, the Irish potato gardens during the Great Depression and the Second World War.

The only consolation to development economists in regard to the scarcity of statistics on an apparently important food production strategy is the fact that development nutritionists have even less empirical data to work with. The only serious nutritional analyses extant on garden production are based on model gardens.

Household gardens are found, historically and ethnographically, in all arable regions. Although there are an infinite number of variations, tropical and temperate gardens can be conveniently designated as the major ecological types, to be used as springboards for further research.

As John Brierley points out in his article in this issue of Food and Nutrition Bulletin, those unfamiliar with tropical gardens often perceive them as lacking order in cropping patterns, a characteristic that they imagine reduces productivity while increasing labour input. Spatial arrangements in tropical gardens, however, often depend on the utilization of plant-symbiotic relationships, which both increase soil fertility and reduce labour input.

Space utilization is optimal in tropical food production arrangements, and, although it appears "chaotic" to the temperate-climate scientist's eye, this kind of vertical layering must become a model for future food production under conditions of limited space.

Layering is not as definite a feature of temperate gardens in the cooler, sun-poor regions of the world. In temperate gardens, trees and bushes are well-spaced, leaving ground-covering plants without shade. Annual seed culture is prominent where distinct seasons control plant growth.

Thus, defined cropping areas are the rule in temperate gardens, with reduced inter-cropping and mixed cropping resulting in a more open vegetation canopy that takes full advantage of solar radiation.

Home garden projects are like small windows through which one can see the biases and misguided assumptions of larger agricultural development projects in the Third World. Being small with visible limits, garden projects mirror the development agency mentality in that they favour Western agronomic techniques and crop selection, linear planting and high inputs, and they place stress on mono-cropping and row cropping.

Unfortunately, those people who have studied traditional gardening systems intensively are rarely the ones who participate in the design and implementation of garden projects. The massive literature on "how-to-do-it" has not been linked with "how-it-is-already-done." There is clearly a need for interdisciplinary research involving nutrition and garden - as opposed to field - horticulture and for project implementers of household garden programmes.

Continued neglect and misunderstanding of home food production can no longer be afforded at a time when "alternatives for increasing food consumption levels of .. . poor households are [urgently] sought" [7] in order to ensure that, in the words of FAO Director-General Edouard Saoma, "all people at all times have both physical and economic access to the basic food they need" [2] .

7. Sigma One Corporation, An Assistance Strategy toward the Improvement of Nutrition in Peru (USAID, Peru Mission, Lima, 1983).