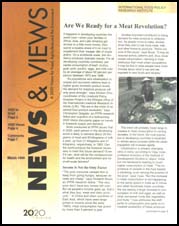 How Large a Threat Is Soil Degradation?

Global population in the year 2020 will be a third higher than in 1995, but demand for food will rise by an even higher proportion as incomes grow, diets diversify, and urbanization accelerates. The pressure on arable land is likely to intensify greatly. In Soil Degradation: A Threat to Developing-Country Food Security by 2020?, 2020 Discussion Paper 27, Sara J. Scherr examines the magnitude and effects of soil degradation now and in the future. She then spells out areas in which more research is needed and suggests policy measures that can lead to better soil quality.

On three-quarters of the world's agricultural land, soil quality has been relatively stable since the middle of the twentieth century. On the rest, however, degradation is widespread and the overall pace of degradation has accelerated in the past 50 years. Almost 75 percent of Central America's agricultural land has been seriously degraded, as has 20 percent of Africa's and 11 percent of Asia's, according to recent studies.

Poor people tend to suffer more than others from soil degradation. They are particularly dependent on agriculture, on annual crops (which generally degrade soils more than perennial crops), and on common property lands (which generally suffer greater degradation than privately managed land). The poor also often lack the capacity to invest in land improvements.

Estimates of future land loss due to degradation vary widely, from 5 to 12 million hectares a year. Assuming that land loss continues at current rates, an additional 150 to 360 million hectares would go out of production by 2020. Although degradation appears likely to pose only a modest threat to global food supply or trade by 2020, some groups and regions will be particularly affected. Countries or subregions that depend on agriculture as the engine of economic growth will probably suffer. Degradation will threaten the consumption of poor farmers in the degrading regions. The greatest problems will probably occur in the densely populated marginal lands of Asia and Sub-Saharan Africa, especially where markets are less developed and inputs such as fertilizer are expensive. Significant threats to food supply may also result from the salinization of irrigated lands in Asia.

To combat soil degradation, Scherr argues, policymakers must support broad-based agricultural development and enhance farmer's' incentives and ability to invest in land improvements. In some areas, policies to promote information sharing about existing land husbandry practices and to support research on technologies to reduce conservation costs may be sufficient for addressing the degradation problem. But more specific policies and investments are also necessary, says Scherr, and should be targeted to areas where the economic effects of degradation - on supply, income, or consumption - are identified as most serious. Depending on conditions in each country, these might include finding low-cost sources of plant nutrients to replace fertilizer use, investing in proper water drainage systems, finding alternative uses for saline or degradation-prone lands, reforming land use regulations, helping farmers invest in improving soil quality, and supporting farmers' organizations to address local problems. 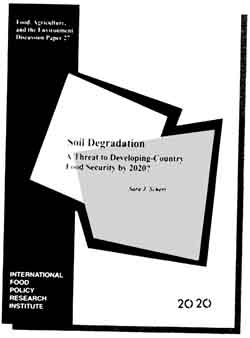