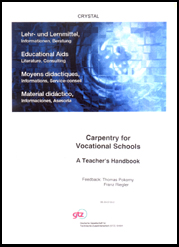 12.4. Ceiling joists used as part of a roof truss

a) Roof truss: - A truss consists of one bottomcord, two topcords, one king post and few diagonal truss members. The topcords are acting like rafters and the bottomcord acts like a ceiling joist.

b) Bottomcord: - When roof trusses are used, the bottom-cord acts like a ceiling joist. In such cases the roof trusses have to be fixed, depending on the ceiling material, at the correct distance (Plywood: centre to centre 610 mm or 1220 mm). Where roof trusses are set 1220 mm apart, a separate construction has to be made to support the plywood in the centre between the two trusses and at the cross joints of the plywood.

c) Two storey house: - In buildings with two stories, the ceiling joists of the ground floor are the floor joists of the first storey.