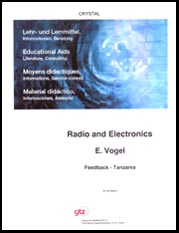 In a superhetreceiver the oscillator (often called the LOCAL OSCILLATOR) has to produce a high frequency which is:

Therefore the oscillator must be able

- to produce a an RP-signal of a special and constant frequency and a constant amplitude.
- it must be easily possible to adjust its frequency.

HOW TO PRODUCE AN AC-VOLTAGE?

We know at the output of an amplifier the output voltage is dropping if the input voltage is increased. As explained in chapter 17 positive feedback causes oscillations. Therefore we have to find a solution how to get the output signal changing its phase for 180 degrees.

A solution is a circuit as shown in fig. 196 where we find a transformer used as collector resistor in a class A amplifier. If there is produced any change of the output signal in that circuit (for example by switching it on) there will be produced a voltage in the secondary coil of the transformer and this will cause an input signal which will be amplified and fed back again to the input...... and so on. The stage will carry on to produce oscillations.

But this circuit cannot serve us as an oscillator for our local oscillator, because the frequency produced is not totally at random.

PRODUCTION OF A DEFINED FREQUENCY

Due to different problems when constructing an oscillator circuit there have been invented several oscillator circuits. But all of them are working on the general principle of positive feedback as derived above.

To avoid the use of a transformer this circuit uses a portion of the inductor to produce the positive feedback.

Here the feedback is coupled in at the emitter-resistor. The main advantage of that circuit is, that the base is connected via a capacitor to ground, which protects the circuit against interference from outside.

Is made up in a so called common-collector-configuration. The main advantage of this circuit is, that the load current is flowing mainly over the collector-resistor.

The PUSH-PULL-OSCILLATOR which is actually a simple multivibrator circuit (used in a lot of other fields as well) The big advantage of this circuit is that the output can be matched exactly to the input by the secondary coil of the transformer.

1. What is an oscillator necessary for in a superhet receiver?
2. How can oscillations be produced generally?
3. How can the frequency be kept stabil?
4. Describe at least two different kinds of oscillators!